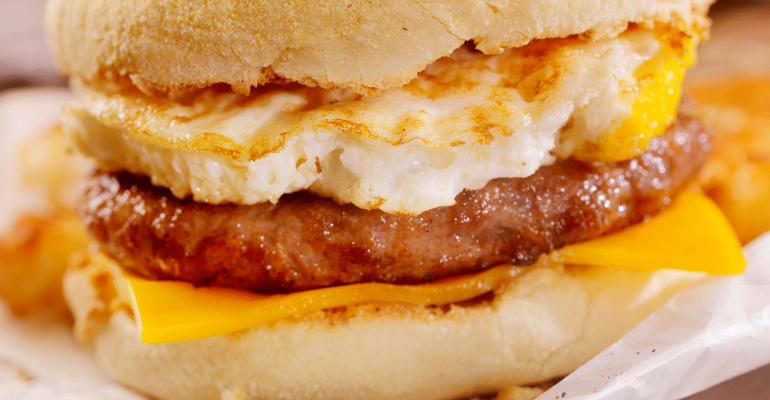 At breakfast, convenience is king

Breakfast has long been considered the most important meal of the day by consumers, but now a growing number of restaurant operators are waking up to the early daypart’s huge potential.

The “morning meal,” a category that includes both breakfast and morning snacks, has shown consistent traffic growth over the last several years, and is the only foodservice daypart with year-over-year growth, according to the latest research from global market research firm The NPD Group.

Operators that serve breakfast are meeting multiple consumer needs, NPD found. Restaurant breakfasts satisfy busy consumers’ need for convenience and affordability, as breakfast tends to be less expensive then eating out at other meal occasions.

“The breakfast sandwich is the most popular eating behavior in more than a decade,” said Portalatin. “[It’s] something we’re increasingly consuming.”

Innovative operators — mostly those in the quick-service segment — have helped to diversify the definition of a breakfast sandwich. Today, a breakfast sandwich could just as easily be egg, ham and cheese on and English muffin, as it could be chicken on a buttermilk biscuit, a burger patty between two pancakes or scrambled eggs and bacon in a taco shell.

Millennials — now in their 20s and 30s and at peak career and family building phase of life — place a particularly high value on convenience and are a prime target for restaurants looking to promote easy breakfasts.

“[They’re] outsourcing,” said Portalatin. “It ultimately comes down to convenience.” 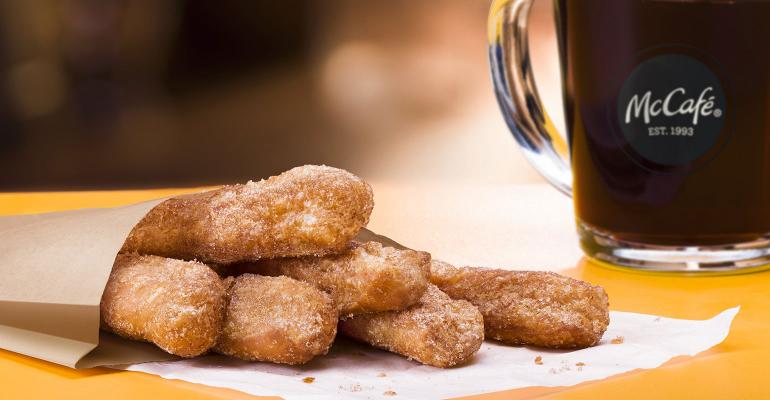 While major restaurant chains continue to innovate at the morning meal — such as McDonald’s recent launch of Donut Sticks and its Triple Breakfast Stacks, an indulgent spin on of its popular Egg McMuffin — smaller chains are finding new ways to push convenience, affordability while staying true to their brands.

Joe Kahn, founder and CEO of Condado Tacos, the Columbus, Ohio-based build-your-own taco chain, got the idea to start offering grab-and-go tacos for breakfast during his travels to Austin, Texas.

“Every restaurant has grab-and-go breakfast tacos,” Kahn said. “It’s pretty prevalent down there. Not so much in Ohio.”

Condado Tacos had a successful weekend brunch with three to four breakfast tacos on the menu, but Kahn says he always wanted to do egg tacos all day long. As a first step, about six months ago he added scrambled eggs and bacon as an all-day option at all 10 locations. Eggs now account for 10 percent of proteins sold and are growing, said Kahn.

The next step will be testing out a few grab-and-go tacos at the Cincinnati location. By fourth quarter of this year Kahn hopes to begin testing some of the successful options at several other locations, including opening the stores earlier in the day.

“We don’t open until 11 am, so the biggest challenge will be opening earlier, staffing,” said Kahn. “The big opportunity is the convenience factor with grab and go. Catching these people and giving them this quality product and then they'll come in two to three times a week.”

When the owners of Oren’s Hummus, a Bay-area Israeli food mini-chain, opened their San Francisco, Calif. location in an area surrounded by offices, a convention center and hotels, many of which don’t offer full breakfast, they knew it presented a big opportunity.

“There were a massive number of people around that location in the morning and they were totally under-serviced,” said Executive chef and owner David Cohen. “So we said ‘Let’s do it. Let’s give them a great breakfast!’”

Launched in July 2018, Cohen says that breakfast at this location now accounts for about 12 percent of total sales and continues to steadily grow.

“We knew we could easily pick up market share,” said Cohen. “It really was a no brainer. We just had to commit to a great menu and developing the program.”

The menu features traditional Mediterranean fare, including the best-selling Israeli Breakfast, served with two eggs any style, Israeli salad, fresh goat cheese with olives and roasted peppers, tahini, matbucha, a basket of assorted fresh breads, as well as fresh juice and an espresso drink ($18). Other dishes include such as Shakshuka, a spicy tomato sauce and egg bake ($12); Gluten Free Quiche ($9.50); and a Smoked Salmon Plate ($15).

Breakfast to go is available through Oren’s third-party delivery partners, and private breakfast buffets are available for offices and groups in town for conventions.

“The biggest opportunity still lies with getting guests in for the first time and giving them a great experience,” added Cohen.