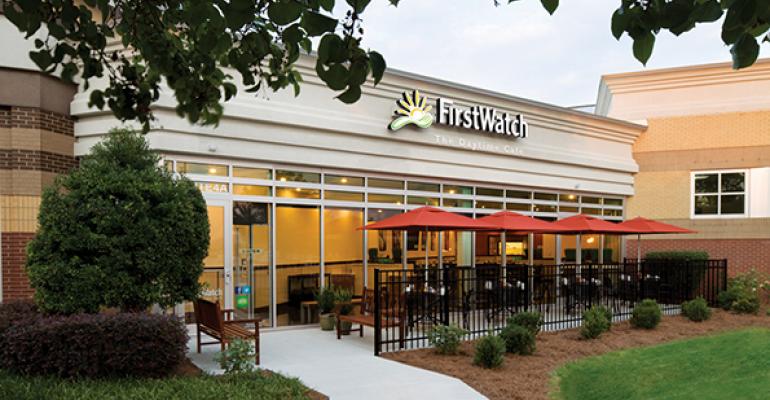 <p>First Watch executives said the chain&rsquo;s high marks for Service are likely a result of its emphasis on both employee and customer satisfaction.</p>
Data & Research>Consumer Picks

And yet, it’s nothing new to the chain and its co-founder, president and CEO Kenneth Pendery Jr.

The company has ridden a wave of more than 200 local awards for best breakfast or lunch. Those accolades have fueled the company’s growth, and have given it a reputation far beyond its home in the Southeast.

“It almost gives me chills,” Pendery said. “I’m from Florida. People come from the Midwest, and they tell me that the service here in Florida is just as great as it is at the First Watch in Dayton, Ohio. I love that consistency.”

Pendery insists that the secret to the chain’s consistent success isn’t much of a secret. It is simple basics — “blocking and tackling,” he said. First Watch does that in an environment that emphasizes employee and customer satisfaction and a business model that is easy to operate.

“We work really hard on the things that aren’t sexy and don’t get headlines,” said Christopher Tomasso, the chain’s chief marketing officer. “We work on the basics of the restaurant industry, which are easy, but the most difficult things in the world to execute.”

The company’s business model dates back to 1983, when Pendery and John Sullivan founded a concept that serves breakfast, brunch and lunch in Pacific Grove, Calif.

The chain was unusual, in that it was only open from 7 a.m. to 2:30 p.m. “We wanted to build a great breakfast, lunch and brunch restaurant,” Pendery said.

Three years later, the pair took the exceedingly unusual step of packing up at the same time and moving themselves, their families — and their restaurant concept — 2,800 miles to the other side of the country to Florida.

Pendery said that the company’s employee-friendly culture was important even then. A big part of that culture involved hiring from within in an environment that didn’t outpace its people.

For instance, the company grew to five locations in the late 1980s and added another 25 locations throughout the ’90s. However, that expansion only came when there were people who could step in and manage the new locations, even though there was enough demand and pressure to expand the business faster.

“We wanted to build restaurants behind people, not bank accounts. That’s always been part of our building program and philosophy.”

Pendery is a staunch believer in the power of employees. The restaurant industry in many ways is a service business, yet it is not always known for customer satisfaction.

But some of the most successful restaurant companies at the moment, like Denver-based Chipotle Mexican Grill Inc. and Atlanta-based Chick-fil-A Inc., have business models that emphasize employee and customer satisfaction.

“We put a tremendous amount of emphasis on our mission,” he said. “We put employees first as much as possible. We try to work with management and staff, give them a lot of responsibility, a lot of authority, to do a great job.

“And when you build on that base, it extends to the customer. They make our food a little quicker, a little better. [We do that] by empowering the staff to keep the customer foremost in their performance mind.”

That empowerment plays out across its operations. For example, First Watch lets store managers concentrate on managing employees and service. The company doesn’t load managers with additional work such as ordering food or implementing technology. It gives managers time to ensure employees are giving good service.

“Management doesn’t work on ordering or buying something so they get the best price,” Pendery said. “We try to do much of that at the corporate level. So the biggest focus on management is building a great schedule and spending time with staff. Give them the maximum attention.”

In addition, Tomasso said the company’s culture puts customers first. Servers have what the company calls “veto power.” In most places, Tomasso said, that power lies with the kitchen, which tells servers what they can serve.

It’s the other way around at First Watch, where servers have the authority to require a dish be recooked if something isn’t done to the customer’s satisfaction.

First Watch’s business model also makes it easier for the chain to support its employees. The restaurants, after all, are only open 7.5 hours a day.

The partial daypart has been a revolution in the family-dining sector, where traditional chains like Denny’s and Waffle House are open all the time. First Watch is part of a generation of chains that close just after lunch, focusing only on the daypart where family dining traditionally performs best: breakfast.

The growth of these breakfast-and-lunch chains, including First Watch and Colorado-based The Egg & I, is one of the unheralded trends in the restaurant business.

First Watch sacrifices some revenue with its business model, but perhaps not as much as one might think. Medium volume units in the system do about $1.2 million a year during those eight hours, only about $400,000 less than a typical Denny’s.

But it also gets a business model that is cheaper and easier to operate. “You’re only open in the morning and at lunch,” said Guillermo Perales, a multiconcept franchisee who recently agreed to build 15 units in the Dallas area. “You don’t have a lot of complications. You don’t have to run two shifts. It doesn’t require specialized management.”

Not surprisingly, this is a big lure to prospective servers who like the idea of knowing when they’ll be off every day. The model attracts a more experienced and higher quality wait staff that tend to have longer tenures than the average
restaurant worker, reducing turnover.

“It provides a great quality of life for employees,” Tomasso said. “They can work in the industry they love and be home for dinner or to coach little league soccer.”

He added, “The restaurant industry is so brutal. You work late hours and weekends. If you’re serving alcohol, you can work until 2 [a.m.] or 3 a.m. and be there at 11 [a.m.] the next day. We have a lot of moms who want to be home in the afternoon with their kids. We have dads who want to be home, too.”

It’s difficult to argue with the results. First Watch is a small chain — it has just 140 locations, including 19 Good Egg locations out West. Yet its consumer scores consistently outdo much larger restaurant chains.

In the Consumer Picks survey, First Watch finished with the highest overall score among Family-Dining chains, and its scores topped the sector across several attributes, including Value, Cleanliness, Service, Reputation, Craveability, Likely to Recommend and Likely to Return.

And yet while the company talks so much about service, its top score came in Food Quality, where it easily outdistanced its competitors.

Perales noted that the company’s store design helps give its food a higher quality reputation. The chain’s restaurants have an open kitchen — which he said is quiet and free from some of the noises commonly found in restaurant kitchens. It also provides transparency, enabling customers to see the pancakes being flipped and the eggs being fried.

“It’s open,” Perales said. “Guests see how things are done in the kitchen with the freshest ingredients.”

He said he considers First Watch a “step up” from traditional family dining.

“People will recommend a restaurant if they have a good food experience,” he said. “Happy employees care about cooking food faster, cooking food right, and putting the right priorities in place. Happy and properly motivated employees, with happy smiles, serve quick food, hopefully prepared properly. That flows through subconsciously to the guest.”

The chain has successfully kept its culture even as it has grown through two different sales to private equity groups. In 2004 it was bought by Catterton Partners, which sold the chain seven years later to Freeman Spogli & Co. Each of the investor groups has supported the chain’s expansion.

Pendery said that franchisees have been able to provide the same quality of service as the company stores. The company has been growing through acquisitions of other chains, including its purchase of The Good Egg last year.

“That’s what we’ve been working on in the first year since the acquisition,” Pendery said.

Pendery acknowledges that all of this is hardly revolutionary. The CEO is an avid reader of articles highlighting the best workplaces in the country, and he notes those companies’ success in the business world.

“It’s not about the best computer or [the best] mall developer or the best pharmaceutical or the best restaurant,” he said. “It’s about the people.”

“We didn’t invent anything here,” he added. “I’d love to say that it’s magical. And I don’t mean to take any emphasis off of it, but if you put people first and you live that in your daily focus, then I think the reward is [you] have a happy customer.”