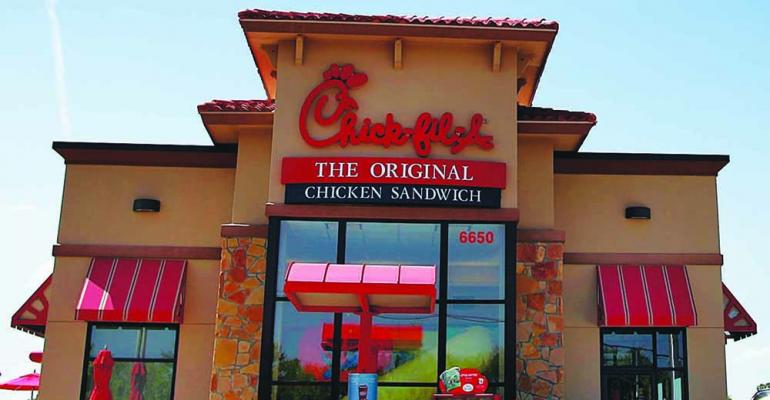 How the brand cultivates loyalty and maintains Consumer Picks status

NRN presents Consumer Picks, a comprehensive look at customer preference and restaurant brand strength. This annual special report is produced with Datassential. Get the full report>>

Those simple pleasantries appear to register strongly with respondents in the 2018 Consumer Picks rankings, as Chick-fil-A again stands out like a Cubalaya-show chicken as a customer favorite among all the restaurant brands surveyed by Datassential.

The Atlanta-based chicken sandwich chain has maintained lofty rankings in Consumer Picks through the years, ranking No. 4 in True Loyalty score out of nearly 200 brands.

Its focused menu got high marks for food and beverage quality, with especially strong scores for taste and freshness. 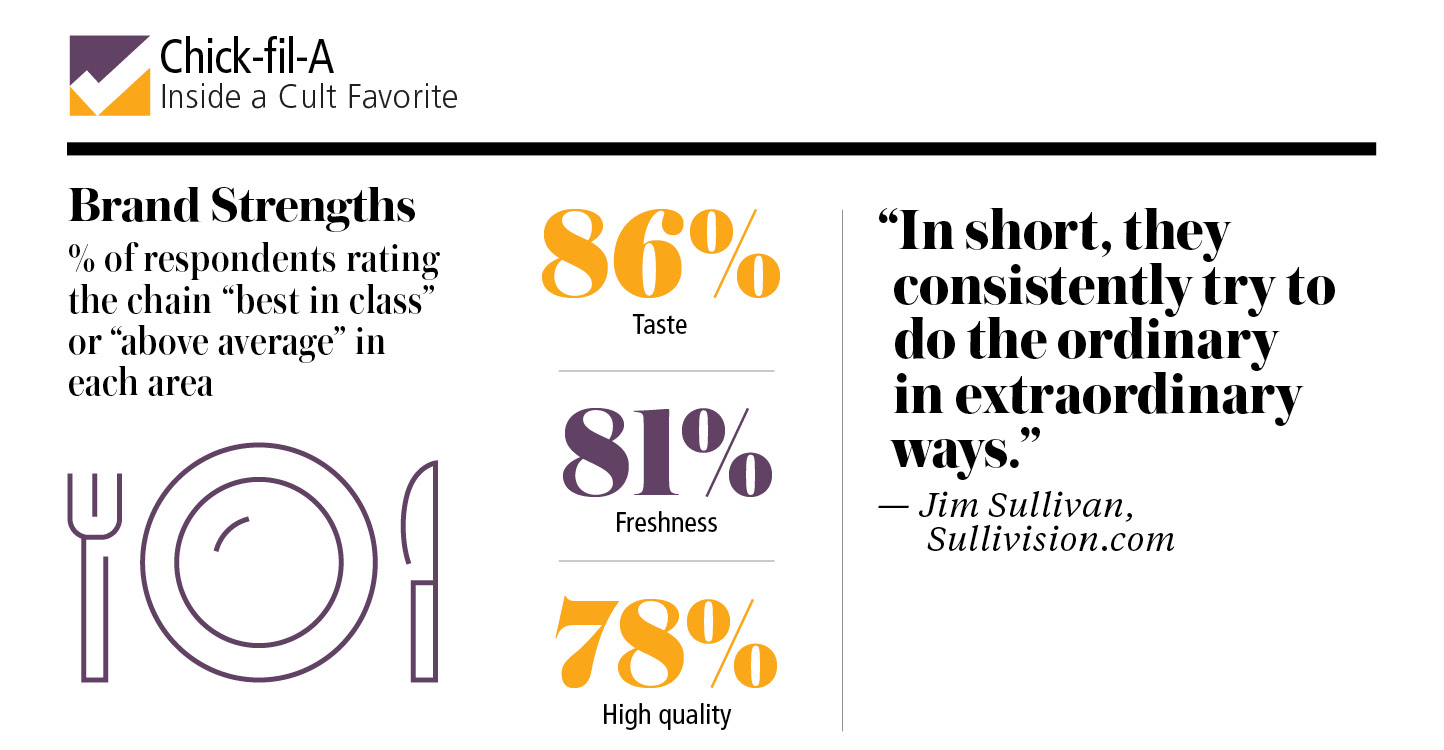 The brand also creates a built-in day of pent-up demand, especially for those consumers who really want what they can’t have, by remaining closed systemwide on Sundays.

Even with that six-day schedule, in this year’s Consumer Picks survey, Chick-fil-A came in at No. 1 in hot sandwiches among limited-service restaurants and No. 2 for its fries, a distinct waffle-cut version. And when it came to limited-service chicken entrées, it was again No. 1 with a six-percentage-point lead on chicken-finger purveyor Raising Cane’s at No. 2.

Chick-fil-A’s simple menu of fried breast-meat sandwiches with one important slice of pickle has remained steady since the brand was founded in 1967 by the late S. Truett Cathy.

The company remains privately held by Cathy’s descendants, who have overseen some tweaks around the edges of the menu, such as the addition of spicy and grilled versions of the chicken breast and the replacement recently of the decades-long side staple of creamy Southern slaw with a more on-trend kale-based Superfood Salad. Other additions through the years include chicken nuggets and breakfast biscuit sandwiches.

The menu ranks in the top 25 for craveability among all brands in the Consumer Picks survey.

If there were a special sauce, it would be the brand’s employees — the ones who freely give of the “pleases,” “my pleasures” and welcoming smiles.

“The secret to Chick-fil-A’s success on the service front, and in many areas, has been and will always be our people,” said Carrie Kurlander, Chick-fil-A’s vice president of external communications.

“We hire for the heart and invest in the rest,” Kurlander said. “Anyone can be taught a trade, but true commitment to customer service must be genuine. We do follow that with best-in-class training, but most of what our operators and team members do comes innately to them — they treat everyone how they would want to be treated.” 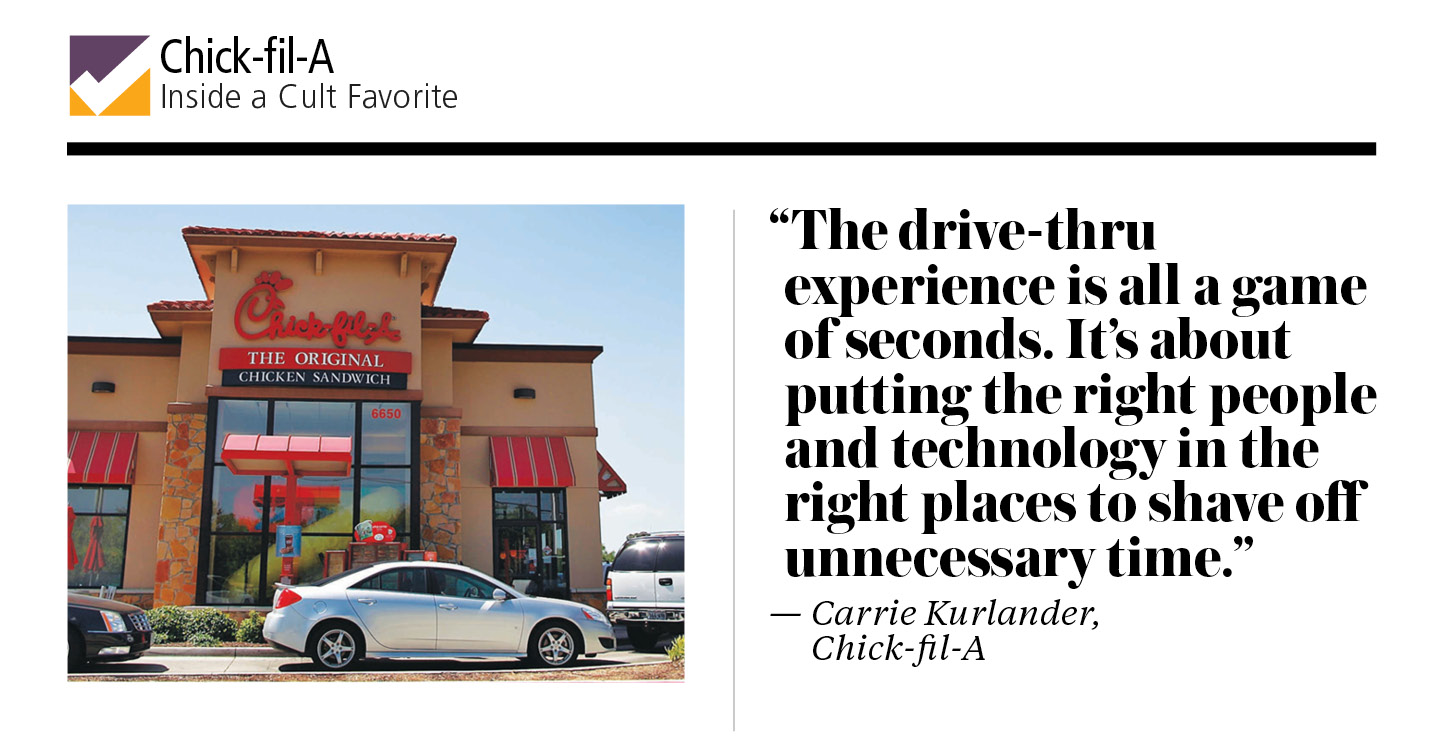 In this year’s Consumer Picks, Chick-fil-A ranks No. 4 in service, with 69 percent of respondents rating the brand as “best in class” or “above average.”

Service expert Jim Sullivan, CEO of Sullivision.com and an NRN columnist, said he believes Chick-fil-A’s “success stems from being habitually consistent in how they train their team members and how they customize and execute the training with most every customer.”

“They put a premium on aligning the simplicity of saying ‘my pleasure,’ ‘please’ and ‘thank you’ to speed and accuracy and cleanliness,” he said. “They choose to refer to their crew as Leaders, Influencers and Stakeholders instead of managers and employees. That sets a higher bar of expectations and usually better performance follows.”

“In short they consistently try to do the ordinary in extraordinary ways,” Sullivan said.

Chick-fil-A recently introduced an ad push to highlight its attention to details, calling the campaign “The Little Things.”

“For us, it’s all about the special touches that our founder, Truett, thought were so important when he founded the brand, and we continue today,” she said. “We want the experience in our restaurants to be truly welcoming and restorative, as well as consistent from restaurant to restaurant. That means making sure we take care of the ‘little things’ like fresh flowers on the table, clean restrooms and a clean play area where people feel comfortable.”

Respondents gave Chick-fil-A a middling score, with many other quick-service brands, for ambience.

But many use the brand for its drive-thru convenience, and Chick-fil-A has been finding ways, such as double order lanes and team members with handheld ordering devices to line-bust in peak periods. 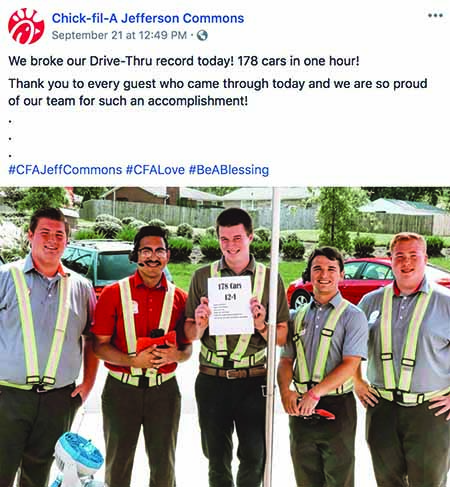 The Chick-fil-A unit in the Jefferson Commons area of Louisville, Ky., for example, set a record in late September, fulfilling 178 car orders in the hour between noon and 1 p.m.

“The drive-thru experience is all a game of seconds,” said Kurlander when asked about the drive-thru record. “It’s about putting the right people and technology in the right places to shave off unnecessary time. Mobile ordering via our Chick-fil-A app and the use of tablets for ‘face-to-face ordering’ and payment are two technology innovations we’re really proud of.”

She said Chick-fil-A is always looking for ways to hone the drive-thru and other operations.

“We’re constantly testing and refining at our headquarters in Atlanta,” Kurlander said. “In fact, we have full-scale restaurant mockups indoors that we drive bikes through.”

As it grows past 2,300 restaurants, Chick-fil-A is making modifications to accommodate more expensive urban real estate and higher volumes in areas with higher population density.

For example, the company opened a 12,000-square-foot, five-story restaurant this past March 29 in New York City, on Fulton Street in the financial district. The location seats 140 guests and offers an open-air terrace on the roof where customers can eat outside.

“One important change is streamlining our restaurant design for a smaller footprint, but higher volume and efficiency,” Kurlander said. “New York has been key in our learnings here. Like we did with the drive-thru, we built a series of mock-ups of our first New York concept to simulate and determine the optimal kitchen layout, the best way to serve and identify customers in line, the most suitable packaging for food orders and more.

“Once our first restaurant opened,” she said, “we were able to identify other changes we could make in our next location to be even more efficient, and it’s evolved from there.”

To meet growing demand, Chick-fil-A in early October said it would be testing two units that focus solely on catering, delivery and to-go orders.

Chick-fil-A has been working on the new units for a year, Kurlander said, and they will be in Nashville, Tenn., and Louisville, Ky. Neither location will have traditional drive-thrus or dining rooms. The Nashville restaurant will be cashless, taking only credit and debit cards for payment even from walk-in customers.

With no need for seating, the 5,800-square-foot Nashville restaurant will dedicate 4,200 square feet to kitchen space, nearly doubling the size of a typical Chick-fil-A kitchen. The location west of downtown Nashville is also near major thoroughfares to increase delivery times and make catering orders easier to transport.

In this year’s NRN Top 200, Chick-fil-A moved up a spot to No. 7 among brands ranked in U.S. systemwide sales, booking nearly $9 billion for the year ended December 2017, up from $7.9 billion in the preceding year. And despite being closed on Sundays, Chick-fil-A’s estimated annual sales per unit rose to $4.2 million for the year ended December 2017, from $3.9 million in the preceding period.