The Chicago-based company was created in 1955 when founder Ray Kroc opened the first restaurant for the McDonald’s System Inc., a predecessor of McDonald’s Corp., in Des Plaines, Ill. Brothers Dick and Mac McDonald had created the Speedee Service System for a limited menu of 15-cent hamburgers, shakes and fries at their San Bernardino, Calif., location. McDonald’s acquired the rights to the brother’s company, which had first deployed the yellow neon Golden Arches, in 1961 for $2.7 million.

Among McDonald’s innovations were the Hamburger University training program, introduced in 1961, the Egg McMuffin in 1975 and the McCafe concept for coffee in 1993 and all-day breakfast in 2015. It also popularized the Happy Meal for children, which usually included games and a toy.

McDonald’s moved in 2018 from its longtime headquarters in suburban Oak Brook, Ill., to downtown Chicago, to a site that once served as the base for Oprah Winfrey’s Harpo Studios.

The burger brand opened its first restaurant outside the United States in 1967 with units in Canada and Puerto Rico. The McDonald’s system now has more than 36,000 restaurants, about 93% operated by franchisees, in more than 100 countries. Of those, 13,673 are in the United States. 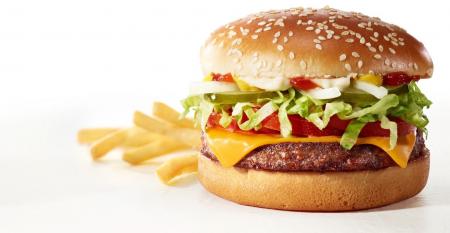 McDonald’s taps Workplace for crew communications
Jun 09, 2022
Meta platform deployed to company-owned units and offered to franchisees in some markets