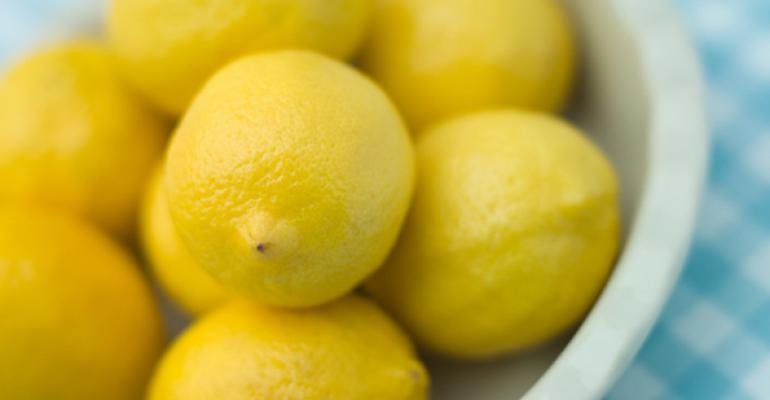 NRN senior food editor Bret Thorn breaks down what you should be watching in the industry this week. Connect with him on the latest marketing trends and news at [email protected] and @foodwriterdiary. RELATED: &bull; Report: Commodity inflation pressures industry to raise prices &bull; Analyst: Modest inflation could favor restaurants &bull; More restaurant commodities news

The Packer reports that prices of the citrus are more than 40 percent higher than a year ago. That’s mild compared to what happened to lime prices in April and May, which tripled by some accounts, but it’s still severe enough that some restaurants are cutting back.

CBS News reports that Landry’s Inc. restaurants are asking customers if they want a lemon slice with their iced tea rather, than offering it automatically.

Bloomberg blames the price spike on the drought in California, reportedly the worst in 500 years and a logical culprit, considering it grew 91 percent of the United States lemon crop last year.

But The Packer points to the harsh winter, instead, noting that a freeze in California and heavy rains in Mexico and in California’s Coachella Valley were the reason for a shrinking supply.

On the demand side, lemons are hot. The Packer said demand is at an all-time high, and Bloomberg, citing Mintel data, pointed out that lemon-flavored ingredients on foodservice menus rose 11 percent between the second quarters of 2011 and 2014, due to more use in sauces and dressings.

Also, global demand has increased, according to Forbes, which quoted a large California citrus producer as saying lemon exports rose 150 percent between 2011 and 2013, particularly to Southeast Asia, as that region’s economy develops.

Forbes also said that, according to Google, more lemon is being added to water, noting that the most common lemon-related searches were “lemon in water” and “lemon and water.”

According to the lemon-related Google chart that Forbes linked to, lemon searches were relatively flat until 2009, and they’ve been rising ever since, with searches particularly high during the summer months in the Northern Hemisphere.