/sites/all/themes/penton_subtheme_nrn/images/logos/footer.png
Daily quotes
BROUGHT TO YOU BY
Daily quotes
Subcategories
Recent
Recent
NRN editors discuss KFC’s new wraps, McDonald’s earnings and marketing, and TikTok
Feb 03, 2023
January was a strong month for restaurant hiring
Feb 03, 2023
Why data is crucial for both guests and employees, Freddy’s COO says
Feb 03, 2023
What the future of equipment looks like
Feb 03, 2023
How USHG committed to its journey on diversity
Feb 02, 2023
Featured
The emergence of mocktails
Jan 23, 2023
36 restaurant industry predictions for 2023
Dec 21, 2022
10 restaurant chains making waves in the breakfast space
Dec 14, 2022
How eco-friendly Seattle restaurant chain Just Poke is doubling in size in 2022
Nov 17, 2022 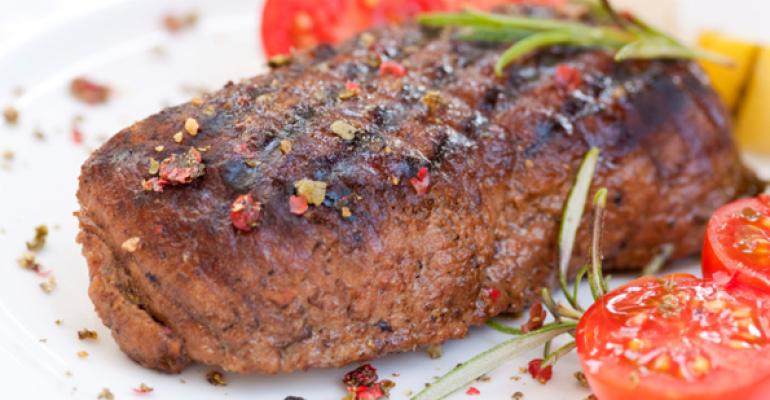 Despite record-high prices, beef sales in restaurants rose in both volume and value in 2013, according to a report funded by the beef industry.

More than a quarter of that growth, about 22 million pounds, came in the form of ground beef, something commodity expert John Barone, president of Market Vision, Inc., said might be due to the continued proliferation of hamburger chains.

Multiple years of drought have contributed to high cattle feed prices, he said, which in turn has resulted in shrinking herds, as ranchers slaughter their cattle rather than feed them.

Although cattle producers are working to rebuild their stock, a relief in beef prices is unlikely until late 2016, Barone said.

Nonetheless, growth of beef sales in restaurants continues across the board. Beef rib sales were particularly robust, having grown by 14 percent, or 18 million pounds, in large part due to the proliferation of short ribs on menus.

Steak sales by volume have also risen by 18 million pounds, which is just 1.7 percent of total sales. The growth is led by sirloin steak, which accounted for 14 million pounds of the growth. 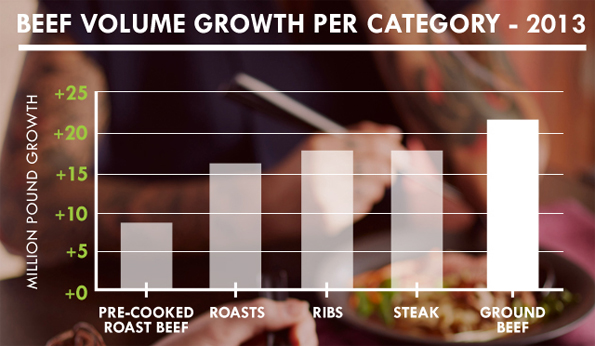 The annual volumetric study evaluates beef sales in terms of pounds and dollars. Respondents to the survey include protein-purchasing executives at 180 of the top 250 restaurant chains, which represent $41 billion of foodservice sales in 2012. It has measured an increase of 178 million pounds in total beef sales in foodservice since 2009.