/sites/all/themes/penton_subtheme_nrn/images/logos/footer.png
Daily quotes
BROUGHT TO YOU BY
Daily quotes
Subcategories
Recent
Recent
Nation’s Restaurant News named finalist for Best Media Brand, and Restaurants Rise digital community named finalist for Best New Product in 2021 Neal Awards
May 11, 2021
McDonald's to promote ‘We Can Do This’ COVID-19 vaccine info
May 11, 2021
The first round of Restaurant Revitalization Fund grants is about to be distributed
May 10, 2021
Sam Oches named Editorial Director, Editor in Chief of Nation’s Restaurant News and Restaurant Hospitality
May 10, 2021
Viewpoint: 5 tips for navigating the challenging labor market
May 07, 2021
Featured
Subway names Donagh Herlihy as chief digital and information officer
May 03, 2021
Taco Bell is testing out a new vegetarian protein
Apr 23, 2021
BJ’s plots expansion of Beer Club, virtual Slo Roast brand
Apr 23, 2021
How Taco Bell is going to start recycling its hot sauce packets
Apr 19, 2021 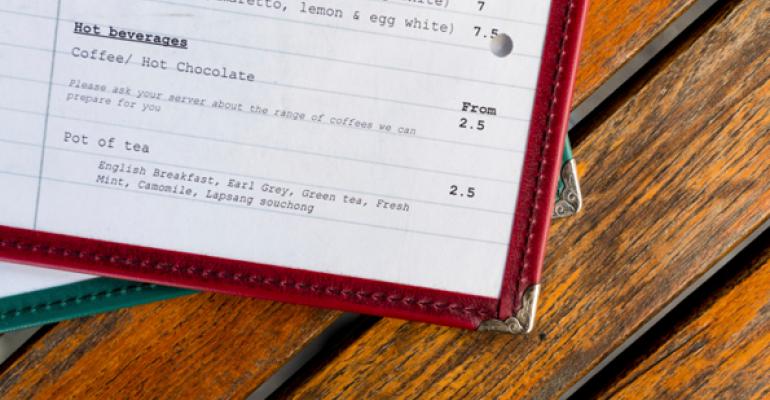 Prices for food at home, as well as food away from home, will continue to inch upward through 2014 and 2015, but the spread between the inflation expected in those two retail segments is likely to favor restaurants, a new report found.

Sara Senatore, Bernstein Research senior analyst for restaurants, wrote in a research note that foodservice brands’ value proposition relative to grocery stores likely would improve modestly, and that the biggest winners could be restaurant brands with appeal to higher-end customers.

“We believe the relative inflation should be most beneficial to chains specializing in high-value, highly inflationary products like steak,” she wrote, citing Darden Restaurants’ LongHorn Steakhouse brand and Texas Roadhouse as likely beneficiaries.

“While greater price sensitivity among lower-income consumers might benefit restaurants exposed to that market,” she continued, “any increase in food-at-home prices also leaves less income to be spent on discretionary outlays like restaurant meals, suggesting that food-at-home inflation is more unambiguously positive for restaurants with more affluent customers like fast casuals Chipotle Mexican Grill and Panera, and coffee specialists like Starbucks.”

“This will likely be a new period when the gap between food-away-from-home inflation and food-at-home inflation swings into negative territory again, indicating that the relative price of dining out versus dining in is becoming increasingly cheaper,” Senatore wrote. “We expect this dynamic to last for most of the next 12 months.”

The relative pace of inflation influences how consumers trade between food at home and food away from home, Senatore said.

“While the absolute level of pricing is substantially lower for food at home, consumers will — on the margin — make trade-offs between cooking at home and eating out as relative pricing shifts,” she wrote. “Accounting for the cost of the time spent preparing a meal at home narrows the gap substantially and helps explain why seemingly modest changes in pricing can change how the ‘share of stomach’ is allocated.”

Nearly all the restaurant brands that Bernstein covers have reported levels of menu price increases for 2014 that fall around or below the 2.7-percent inflation Bernstein estimates for food away from home. Those increases include 3 percent for McDonald’s and Yum! Brands Inc., 2 percent for Wendy’s, 1.7 percent for Panera Bread and 1 percent for Starbucks.

“This suggests that for these branded chain concepts, their value proposition will improve versus food at home to an even greater extent than the overall restaurant industry,” Senatore wrote. “For some companies like Panera, a more moderate pace of pricing is necessary to restore their brand-specific issues on price-value. But for the others, we believe that slower-than-industry pricing will help reinforce their advantage over many of the independent operators that populate the still-fragmented restaurant industry.”

The only chain in Bernstein’s coverage roster reportedly taking a price increase larger than the firm’s 2.7-percent estimate for total food-away-from-home inflation is Chipotle Mexican Grill, which said it would raise prices about 6 percent this year. Senatore noted that Chipotle customers likely would accept this rate of increase without much resistance.

“It has been nearly three years since the brand last raised prices,” she wrote, “and given the improvements in food quality and guest experience over that period of time, we are confident that Chipotle’s perceived value proposition is strong enough to navigate a 6-percent price increase.”