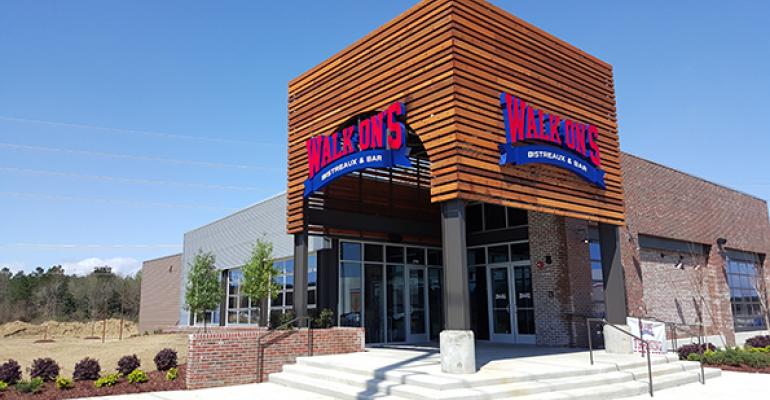 Walk-On’s Bistreaux & Bar, a regional sports bar in Louisiana, is poised to make its first road trip outside the state with an opening in Lubbock, Texas, in September and recently signed development agreements for Dallas-Fort Worth and Houston.

Brandon Landry, founder and CEO of Baton Rouge-La.-based parent Walk-On’s Enterprises LLC, said the eight-unit sports bar, which began franchising in 2014, will add four new franchised restaurants this year to its base of eight. Six of the existing units are company-owned.

Walk-On’s Enterprises this month announced an area development agreement for the DFW market with WO Metroplex LLC, owned by Lubbock entrepreneurs Johnny Qubty and Josh Allen, who are already franchisees.

Qubty and Allen are nearing completion on their first Walk-On’s in Lubbock, with an opening planned for September, and the first of five DFW locations is expected in 2017. The Houston agreement, with franchise operator Brandon Hargrave of Lafayette, La., calls for 10 restaurants.

Landry, in an interview Tuesday, said the brand’s biggest point of differentiation from other sports bars remains its food.

“Typically sports bars aren’t known for really good food, but we’re different in that way,” Landry said, adding that sales in Walk-On’s units average $5.3 million a year on a mix of 75 percent food and 25 percent beverage.

Landry said Walk-On’s customer base skews more female than many sports-bar concepts, with about half the customers being women. “It’s very comfortable for women to come in and enjoy good meals,” Landry explained. “It’s not your typical rowdy-rowdy guys-beer-drinking sports bar. It’s a restaurant first and foremost.”

The company in March opened a new prototype restaurant in Denham Springs, La., that will serve as the template for future units, Landry said. It is 8,400 square feet with about 260 seats.

The original Walk-On’s, which opened in 2002 near the Louisiana State University campus in Baton Rouge, was about 10,000 square feet.

“We’ve become a lot more efficient in our building design,” said Landry, who co-founded the restaurant with Jack Warner after they both had played as walk-ons the LSU basketball team. They chose their hoops status for the sports bar name.

“Most people, especially sports fans, know what a walk-on is,” Landry recalled, and they can relate to the two founders’ story of “two benchwarmers that were playing for the true love the game” with the hope of eventually playing professionally with the National Basketball Association.

“I figured out pretty early that we weren’t going to playing the NBA, so we’d better figure out another way to make some money,” Landry said. “Everybody has a little bit of ‘walk-on’ in them, whether an athlete or not. The walk-on is the underdog story.”

Brees and his wife, Brittany, had frequented the New Orlean’s Walk-On’s location, which is a few blocks from the Saint’s Superdome.

That high-profile Brees investment, Landry said, “gave us a lot of credibility on a national level.”

Landry said Walk-On’s has other development agreements being discussed.

The next Walk-On’s opening will be in Metairie, La., in August, with Bossier City and then Lubbock.