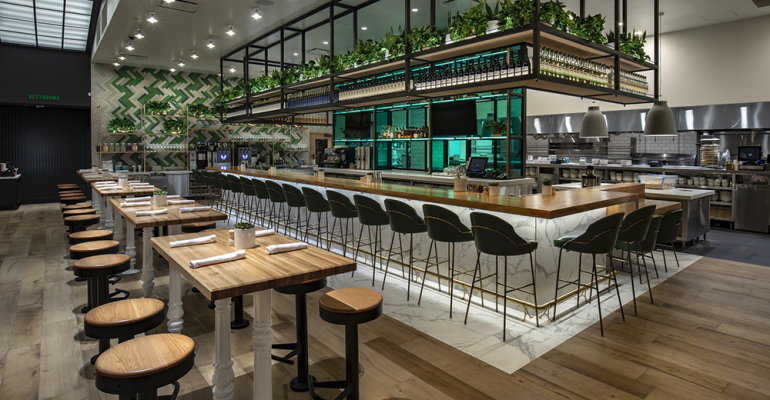 “As we thought through your presence in Vegas, we noted that it has changed quite a bit over the last few years. It has an amazing food scene. You have all sorts of conventions that are coming to town with different food needs,” said Christine Barone, True Food Kitchen CEO, in an interview.

“We have a lot of various sizes in our portfolio,” Barone said. “We’re really thoughtful about the community where we go in. We have stores that range from 4,200 square feet up to the 11,000 square feet.”

“In Vegas, you want to be thoughtful about the event space,” she said. “It made a lot of sense to have a larger location.”

Adjacent to the restaurant, and beneath the Forum Shop’s freestanding spiral escalator, True Food Kitchen opened its first a True Bar in the venue’s reflecting pool.

The bar-lounge features fresh-pressed juices, organic teas and natural refreshers, such as the Sparkling Prickly Pear Tisane, the Hangover Rx and Kale Aid, as well as a seasonal lineup of craft cocktails, wine and beer.

Barone said that emphasizes True Food’s positioning as the “Oasis in the Desert.”

“The Forum Shops is the largest shopping destinations in Las Vegas,” Barone said. “As you think about spending time there, having a place to take a break, we felt like it was a good part of the mix.”

She said the brand thought out how guests would feel in each of the spaces.

“We had a lot of fun with the design of this restaurant,” Barone said. “As you walk into the restaurant, it’s like a garden. We have different spaces: the greenhouse with the garden feel, the back patio to the garden feel. The fabrics are up-level. We were thoughtful about new elements we could throw in.”

The Las Vegas unit has hours open past the general 9 p.m. local time closing. “We will be open until midnight to 1 a.m. on weekend nights,” Barone said. “In Vegas, it’s a much later crowd.”

Barone said the brand’s next opening will be on Long Island, N.Y., in six to 12 weeks.