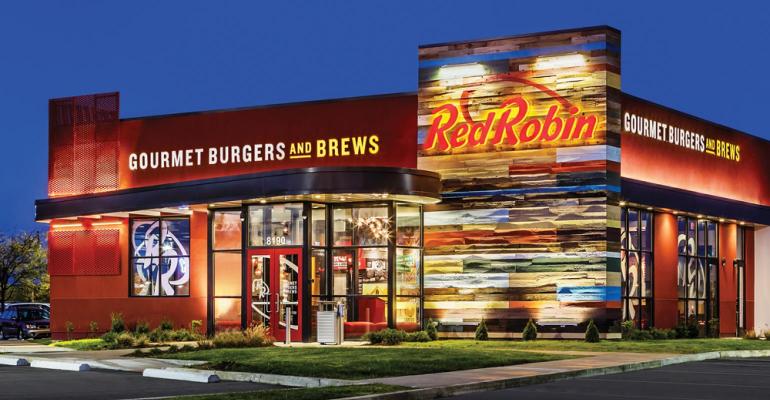 Red Robin is slowing the rollout of its very successful addition of Donatos pizza on the menu, which has been rolled out to 198 of the chain’s 525 restaurants and boosted incremental revenue contributing $14.4 million in sales.
News>Casual Dining

Staffing was a real problem for Red Robin Gourmet Burgers Inc. in the fourth quarter, dampening two-year same-store sales. But officials said Thursday sales are already improving as the impact of Omicron recedes, and the casual-dining chain is expected to get back to pre-pandemic performance by 2023.

For the Dec. 26-ended quarter, Red Robin’s same-store sales were down 0.7% compared with 2019, which was largely blamed on the impact of Omicron and staffing challenges. Restaurants that were at or above 2019 staffing levels had two-year same-store sales increase of 6.1%, the company said.

In fact, Red Robin is slowing the rollout of its very successful addition of Donatos pizza on the menu, which has been rolled out to 198 of the chain’s 525 restaurants and boosted incremental revenue contributing $14.4 million in sales. Guest checks that included Donatos Pizza were $10 higher on average.

But Paul Murphy, Red Robin’s president and CEO, said fixing the staffing issue was the chain’s number one priority, and the company felt it unwise to add new guest initiatives in restaurants that were still struggling to get back to pre-pandemic staffing levels. So Red Robin will add the Donatos menu to only 50 restaurants this year, compared with 120 in 2021.

“What we are solving is a staffing issue, which is limiting our throughput, not a branding issue,” said Murphy.

Red Robin first announced the partnership with Donatos in 2020 as way to round out the burger chain’s menu. The deal quickly was identified as a game changer, and Murphy said Thursday the company continues to see the addition of pizza as a long-term success vehicle.

Murphy said the company is evaluating compensation and quality of life issues to help with team member recruitment. And the company hired an unnamed outside resource to help speed the recruitment process.

But with Omicron receding — along with the related restrictions — Murphy said dine-in has been improving at a steady pace in the first quarter.

“We’ve seen a nice cadence of dine-in improving week-over-week, and as we see restrictions recede and guests becoming attuned to the new normal, that part of the business will continue to grow,” said Murphy.

Meanwhile, Red Robin has kept its off-premises business going, even as dine-in picks up. During the fourth quarter, off-premises accounted for 31.4% of sales, compared with about 14% pre-pandemic.

During the fourth quarter, Red Robin opened a new-prototype restaurant that has enhanced dine-in features, as well as off-premises and curbside service. That unit has had average weekly sales of more than $80,000, Murphy said, and is on track to do well over $4 million in annual sales.

Red Robin is also investing in its digital ecosystem, with a new app and enhanced loyalty program launched in the fourth quarter and a new website coming in the first quarter this year — all designed to provide a more user-friendly and seamless digital ordering experience. New features include geofencing to alert the kitchen when guests arrive for pickup, for example, and new mobile payment options, such as Apple Pay and Google Pay.

Murphy said Red Robin’s three virtual brands — Sammy’s Chicken, Fresh Set and The Wing Dept. — generated a collective $8.4 million in sales last year. And Red Robin is launching another licensed virtual brand this year, but Murphy did not disclose what it will be.

Though happy with their performance, Murphy said it’s still too early in the lifecyle of virtual brands to see if the trend has staying power. “So far so good,” he said. “But no one is quite sure of the long-term future.”

That increase was driven by a 26.6% increase in traffic and 13.5% increase in average check — though the check average was boosted by a 4.2% increase in menu prices, and more pricing is expected in 2022.

Overall revenues increased 41.5% to $276.7 million for the quarter, and Murphy credited in part the popularity of the Cheesy Bacon Fondue Burger — served with extra fondue on the side for dipping — which was the company’s best-performing limited-time offer of all time, so it will stay on the menu for an extended period.