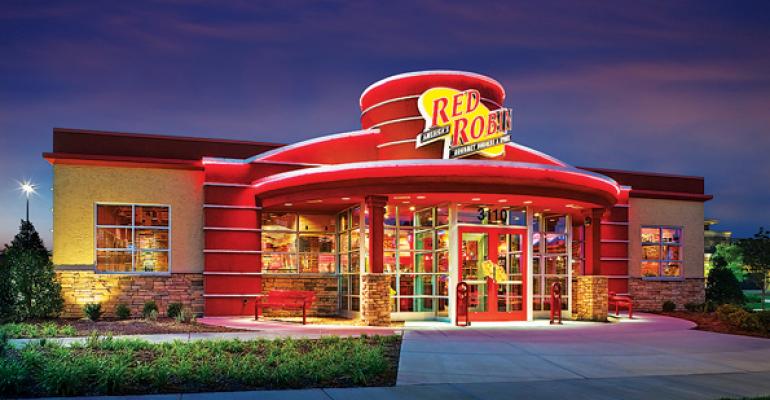 After reporting a strong second quarter with a 44-percent increase in net income, the company upgraded its outlook for the year, projecting a same-store sales increase of 3 percent, up from the 2.5-percent to 3-percent increase projected earlier.

For the quarter, same-stores sales at company locations rose 4.3 percent, resulting from a 5-percent increase in average ticket that was offset by a 0.7-percent decline in traffic.

“The environment for the casual-dining sector continues to be a challenge and has softened more than we expected, even just a few months ago,” he said. “This further compounds the challenge of accomplishing our goal of positive guest traffic counts.”

Still, chainwide efforts to reverse that trend appear to be taking hold, he said, and there’s more to come.

In recent months, Red Robin has launched several initiatives as part of an ongoing brand transformation. Initiatives have included a new appetizer lineup at various price points, expanded dessert offerings and an enhanced cocktail program, which have all helped boost the chain’s average ticket, he said.

The chain has been testing various remodel packages among 21 restaurants that have also included new plating, food presentation and changes in the service model that have also shown good results, he said.

The nine restaurants that underwent the most comprehensive remodel — an investment averaging about $400,000 — showed the best results, with average sales rising about 6 percent. As a result, the company plans to apply the full transformation to another 20 existing restaurants this year.

Some elements of the brand transformation have been taken systemwide, such as the new plating and food presentation.

Upgrades to service will likely take longer, though in July all bartenders were asked to re-apply for their jobs. Those that were rehired were retrained to elevate the guest experience in the bar, Carley said.

Red Robin is continuing its test of smaller 4,000-square-foot restaurants, as opposed to the traditional 6,000-square-foot “big box” units; as well as a fast-casual variant called Red Robin Burger Works.

At the end of the second quarter, Greenwood Village, Colo.-based Red Robin operated 339 company-owned restaurants and five Burger Works. Franchisees operated another 133 restaurants for a total of 477.

The company expects to open another 15 full-service Red Robin restaurants, as well as at least one — and potentially several more — of the Burger Works concept, before the end of the year.