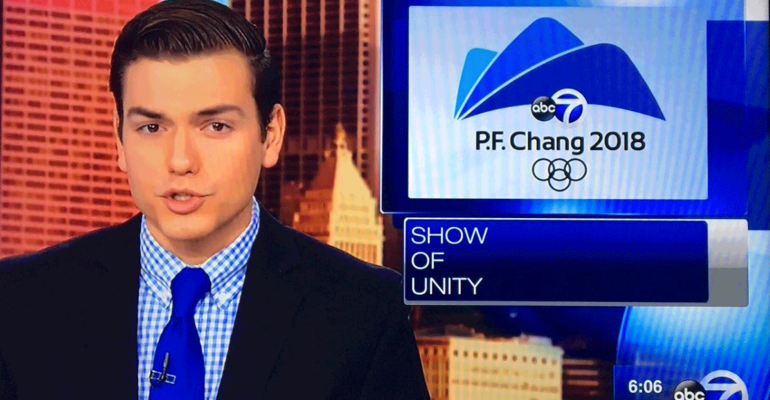 P.F. Chang’s China Bistro Inc. has hosted many important gatherings, but the Winter Olympics is not one of them, contrary to a Chicago TV broadcast graphic.

Scottsdale, Ariz.-based P.F. Chang’s took the error in stride, replying Sunday afternoon in a tweet that “Contrary to this broadcast, we’re not hosting the games.”

Contrary to this broadcast, we’re not hosting the games. https://t.co/3HW694pE4J

"We handled this in-house as we do all of our social media," said Darryl Carr, P.F. Chang's spokesperson, in an email. "We saw this on Sunday, and after seeing the reaction it was getting, we decided we had to respond and have some fun with it."

The Chicago Tribune reported that Jayme Nicholas, a WLS spokesperson, apologized for the image “mix-up,” saying the “P.F. Chang 2018” logo was created for a satirical sports-news segment and was inadvertently used in weekend anchor Mark Rivera’s Saturday report.

But even broadcasting mistakes can produce positive sentiment for the 210-unit chain. As one Twitter user replied: “The lettuce wraps are gold medal worthy.”