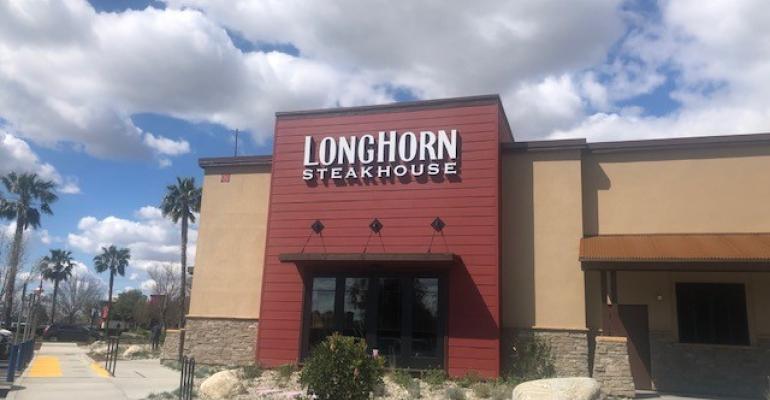 Same-store sales were down more than 70% in each of the last three weeks despite a dramatic uptick in to-go sales at Olive Garden and LongHorn Steakhouse.

To reduce costs amid the coronavirus pandemic, Olive Garden parent Darden Restaurants said it is furloughing 20% of its corporate staff and reducing salaries for roughly 800 remaining employees including a 50% pay cut for top executives.

In a business update released Tuesday, Darden said Olive Garden and LongHorn Steakhouse brands have doubled and tripled, respectively, their off-premise sales during the first six weeks of the fourth quarter ending April 5. But despite the uptick in delivery and carryout sales for the company’s biggest chains, Darden reported a 39.1% drop in same-store sales for the partial six-week quarter.

That covers about half of the impact of the COVID-19 pandemic as restaurants across the U.S. began closing dine-in operations in mid-March to stem the spread of the highly contagious virus.

The last three weeks of the quarter ending April 5 were particularly harsh for the Orlando, Fla.-based casual dining company. Same-store sales plunged more than 70% in each of the last three weeks, underscoring the mounting toll the global health crisis is having on full service restaurants who have been forced to temporarily halt dining room service.

Darden, whose other brands include Cheddar's Scratch Kitchen, Yard House, The Capital Grille, Seasons 52, Bahama Breeze and Eddie V's, said about 99% of its more than 1,800 restaurants remain open for to-go services.

In the regulatory filing, Darden provided to-go sales for Olive Garden and LongHorn.

On Tuesday, Darden said it is taking additional steps to ensure the company has enough cash flow to sustain the business during the COVID-19 crisis.

The company entered into a $270 million term loan credit agreement bringing its total cash on hand to $1 billion.

“Since transitioning operations to a to-go only format, our ongoing weekly cash burn rate would be approximately $25 million including capital expenditures and not including any additional changes to net working capital,” the company stated.

CEO Gene Lee, who previously announced that he was forgoing most of his salary, also said executive officers were taking a 50% base salary pay cut effective April 13. That includes about a dozen of the company’s top leaders.

About 20% of the company’s 1,000 support center employees have also been furloughed. The remaining staff are taking pay cuts.

Company spokesman Rich Jeffers said furloughed employees will get 50% of their salary for three weeks. Darden will continue to cover medical premiums for those who previously had those benefits. The furloughs are indefinite.

While a majority of the company’s restaurants remain open, they are operating at a much reduced staffing level.  To date, the company has furloughed about 150,000 hourly restaurant workers. Salaried managers remain employed.

Under the company’s three-week Emergency Pay Program, furloughed hourly workers receive up to three weeks of pay based on their average pay over the previous 13-weeks prior to the time they stopped working, Jeffers said.

Darden reported the following same-store sales for each brand or business segement for the six weeks ending April 5: down 34.5% for Olive Garden; down 36.4% for LongHorn Steakhouse; down 47.5% for fine dining (Eddie V’s and Capital Grill); down 50.4% for other business (Cheddar’s, Yard House, Bahama Breeze and Seasons 52).