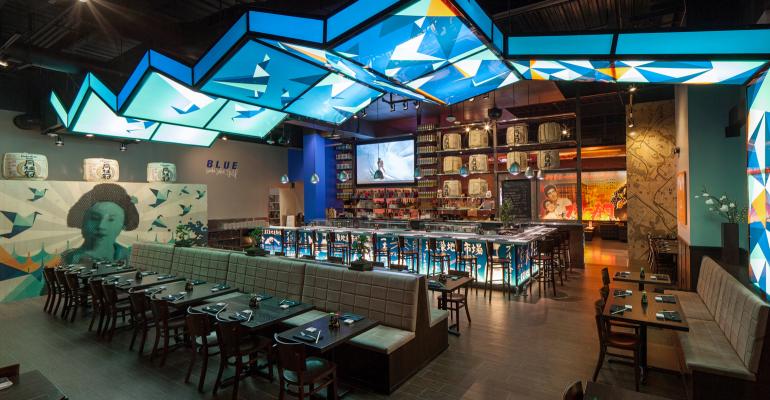 At a time when the casual-dining segment is in distress, the multiconcept Flagship Restaurant Group is planning aggressive growth.

Nick Hogan, CEO and a founding partner of Flagship, said guests have responded in part because the company’s restaurants offer a genuine experience.

“It’s not the most authentic sushi or Mexican, but it’s genuine, and people want to dine in a place where owners are passionate about their business and the product they’re serving,” Hogan said.

Flagship operates full-service restaurants across Nebraska, Texas and Colorado, while the food hall offers fast-casual variations on some of those concepts. Last year, the company reported $50 million in sales, and aims to double sales over the next three years. In September, the group plans to debut Anthem, a Pacific Rim-themed gastropub in Austin, Texas, with a focus on craft beer and tiki-inspired cocktails, along with Asian small plates.

As Flagship charts its growth, the casual-dining segment is suffering the ills of an overbuilt industry, Hogan said.

Landlords are making aggressive deals to get restaurants into retail centers that have lost foot traffic to online shopping. At the same time, restaurant valuations are aggressively high, “maybe too high,” he said.

The pressure is on to perform and make investments pay off at a time when there are just too many restaurants, he said.

But Flagship sees safety in the polished-casual end of full-service dining. Hogan said guests are looking for “something more refined, more exciting and experiential.” The group is also avoiding what Hogan sees as overbuilt suburbs, where promises of future development are not likely to play out. Instead, the group is focusing on tried-and-true destinations, like uptown Dallas.

“It doesn’t mean that every restaurant there will be a home run, but those pockets are where people are used to going,” Hogan said. “There’s less risk of being saturated because there’s only so much space to put in restaurants. And I can track how other restaurants are doing to forecast our own success.” So far, Flagship has supported growth with its own cash and community bank financing. Hogan said he keeps private-equity investors at bay — for now.

“We’re careful not to get ahead of ourselves on the debt curve,” he said.

Hogan, a former attorney, described himself as the “finance guy.” Partners also include Toomas Allisma, an architect who handles design; Anthony Hitchcock, Hogan’s cousin, who is driving the development of Anthem; and Tony Gentile, the corporate chef who spearheads menu development in collaboration with unit-level chefs.

Despite Flagship’s success, the company has faced challenges.

After opening the first Blue Sushi, a small-box restaurant of about 3,000 square feet, with a heavy bar emphasis and a $28 average check, the partners followed it two years later with the more family-oriented Roja Mexican Grill, with a lower price point of about $14 per person, in 8,000 square feet.

“That was a huge challenge to get it off the ground and working,” Hogan said. “We might as well have opened up an oil change repair shop or something, it was so different than what we were used to.”

Roja’s performance has since improved, and the group continues to expand its portfolio.

“I don’t know that the fastest route to the biggest pile of money is developing new concepts every year, but it certainly helps us stay engaged and inspired,” Hogan said. “That genuine love for what we open is a big part of what makes it work.”