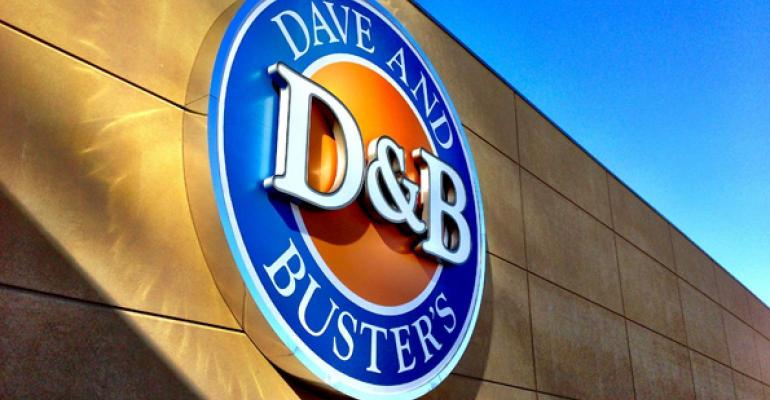 Dave & Buster's Entertainment Inc., which is in the process of acquiring the similar 50-unit Main Event brand, has returned to near full operating hours in the wake of the pandemic and is working on beefing up its late-night business amid a dip in events business, executives said Tuesday.

The Coppell, Texas-based Dave & Buster’s, which released earnings for the first quarter ended May 1, said same-store sales were up 10.9% from the same period of 2019 but special events business continued to lag.

In the first quarter, said Michael Quartieri, Dave & Buster’s chief financial officer, on an earnings call with analysts: “Our walk-in sales continued to post strong comps, up 14.7%, while our special events business continued to lag down 34.6% compared with 2019.” Same-store sales in February were flat because of the COVID variant surge, he said, but March was up 12.5% and April up 21.5%.

“Our uplift in comp store sales has continued during the first five weeks of Q2 as overall comps are up 12.2%,” Quartieri said, adding: “We believe this part of our business is recovering.”

Kevin Sheehan, Dave & Buster’s chair and interim CEO, said the return of events business could improve the top line another four percentage points. “We don't see any reason why that's not going to return to its normalized level as we get through into the fall and the late fall,” said Sheehan, who will step down as interim CEO when the Main Event acquisition is completed, probably late this month.

The companies have said Chris Morris, CEO of Plano, Texas-based Main Event, will assume the Dave & Buster’s CEO role after the acquisition. Shareholders are to vote June 29 on the $835 million Main Event acquisition. Andy Barish, an analyst with Jefferies, said the deal will likely close “that day or the next.”

“I'm looking forward to having Chris Morris join as the new CEO of the company,” Sheehan said Tuesday. “He is an experienced leader and is excited to engage with our shareholders in the months ahead. Under Chris' leadership, I anticipate that our positive momentum will continue.”

Sheehan said the Main Event acquisition will allow the company “to differentiate the customer base” to some degree.

“We saw sequential comp store sales improvement in both food and beverage throughout Q1 with the comp food items count turning positive during the eat and play combo campaign window,” Manning said.

In late May, the company completed its systemwide rollout of reservations, she said, adding: “Guests can now reserve a table in our dining rooms directly through the D&B website or via OpenTable.”

In the first quarter, the company also worked to revitalize the late-night segments with a combination of marketing and programming, Manning added.

“Our late-night happy hour initiative includes reduced size of popular apps as $5 Late Night Bites and an enhanced late-night vibe with live streaming DJ sets and exclusive visuals taking over our screens and our in-store airways,” she said. “Q1 walk-in comp sales during the late-night segment were up positive 9% vs. 2019 and were significantly improved over the prior quarter. With the late-night happy hour programming fully established, our marketing team is now poised to promote it this summer through digital channels to build awareness.”

As well, Dave & Buster’s sees an opportunity among its smartphone app users, of which it now has 3.6 million downloads and 1.9 million who have used the app within the last six months.

“The great thing about the app is it allows you to have one-on-one communication,” Quartieri said. “And that's what our marketing team is now gearing up for. They have the opportunity now, they have the tool, we're starting to gain the data. …. We've got a group of people to now specifically target to get them back into a Dave & Buster's.”