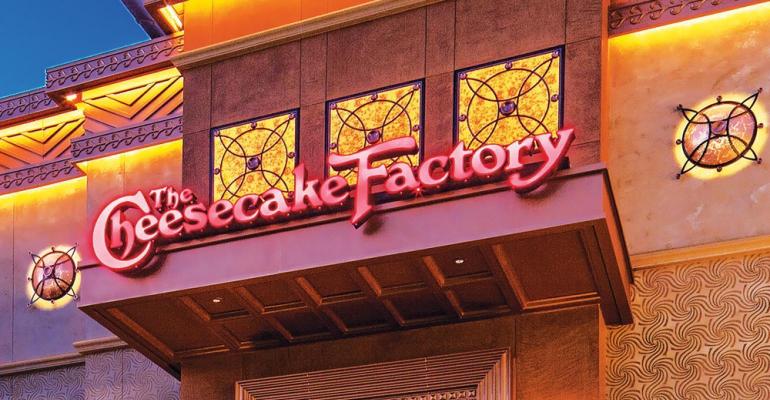 The Calabasas Hills, Calif.-based Cheesecake Factory closed on its purchase of Fox and the casual-dining North Italia and fast-casual Flower Child concepts earlier in October, and executives on a third-quarter earnings call said at least 20 new restaurants are planned in the year ahead.

“We also expect as many as four Cheesecake Factory restaurants to open internationally under licensing agreements” in the year ahead, Overton said.

“We are maintaining the integrity of North Italia concept and everything that makes it so special to guests, while enhancing the systems and processes to further strengthen operations and support the continued national expansion of the concept,” Gordon said.

He said Cheesecake began to convert the North Italia restaurants to its point-of-sale system immediately and is expected to complete that this week.

“We have also negotiated to have our new delivery agreement extended to North Italia and the FRC concepts, just one example of the benefits that our scale brings to these brands,” Gordon said.

He said the off-premise business continued to grow and made up about 16% of total sales in the third quarter.

“We recently renegotiated and extended our delivery agreement with DoorDash, which will further improve the economics of the delivery business for us. We also continue to seek year-over-year growth in our online ordering platform for pickup orders,” he said.

In the third quarter, off-premise sales were about 16% of the company’s total, Gordon added later. “Delivery made up about 35% of that 16%. Online ordering is now at 13%, which is up slightly from where it was last quarter, and phone-in [ordering] is still about 50% of all the transactions.”

On the Cheesecake Factory development side, Gordon said a smaller unit — at 5,500 square feet — in Oxnard, Calif., continues to outperform the company’s expectations.

“Sales remain well above Cheesecake Factory averages,” he said. “It's operating really, really smooth. So our international partners, most specifically in Asia, are excited to see that because they do believe it will allow them hopefully to find some real estate sites that are not available today because the current smallest Cheesecake prior was around 7,000 square feet.”

Same-store sales at The Cheesecake Factory restaurants increased 0.4% in the third quarter. Traffic was negative 3.7%, offset by mix and pricing.

The Cheesecake Factory has 289 restaurants in the United States and Canada and 24 units licensed abroad.