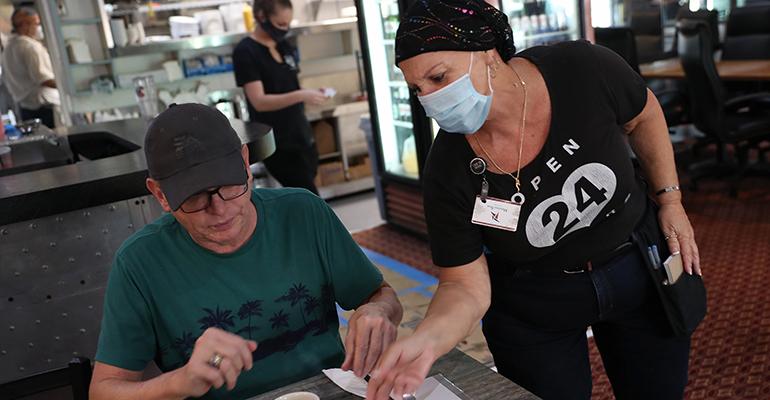 New study by the Centers for Disease Control and Prevention looks at positive and negative cases during peak summer resurgence of the virus; the National Restaurant Association calls report flawed, saying agency shouldn't blame one industry for spreading COVID-19.

Adults who tested positive for COVID-19 during a peak summer resurgence of the deadly virus were twice as likely to have reported dining on site at a restaurant or drinking establishment within two weeks of being tested as compared to those who tested negative, according to a new report released Friday by the Centers for Disease Control and Prevention.

The findings showed that “close contact with persons with known COVID-19 or going to locations that offer on-site eating and drinking options were associated with COVID-19 positivity,” according to the CDC.  The Sept. 11 report is part of the federal agency’s ongoing look at how community and close contact exposures contribute to the spread of COVID-19.

The study initially included 802 patients. That was eventually narrowed down to a sample size of 314 which included 154 adults with positive results and 160 with negative results, or control patients. Each patient was asked a series of detailed contact tracing questions such as known exposure to anyone with COVID-19,  workplace exposures and mask-wearing behavior.

They were also asked about activities they might have participated in within 14 days of showing symptoms including: shopping, attending any at-home gathering, dining at a restaurant or visiting a coffee shop, using public transportation, visiting a salon or gym and attending a church gathering.

The findings showed no significant differences between the case patients and control patients when it came to most activities including shopping, going to a coffee shop, going to a salon, attending a gathering with 10 or fewer persons in a home, going to an office setting, using public transportation and attending a church or religious gathering.

However, the report said that positive COVID-19 patients in the study “were more likely to have reported dining at a restaurant in the 2 weeks before illness onset than were control-participants.”

The study also looked at participants who did not report a recent close contact with a person with known COVID-19. In that analysis, which included 225 participants, positive coronavirus patients “were more likely than were control-participants to have reported dining at a restaurant.”

The CDC also asked participants to describe behaviors observed while dining out such as mask wearing. But, they did not reveal if they dined outside, which health officials consider safer.

The latest government findings comes a few months after a JP Morgan Chase study also linked surges in positive coronavirus cases to restaurants. The study looked at the spending of Chase cardholders, along with COVID-19 data compiled by John Hopkins University.

Still, the CDC said that their findings have limitations such as the those being interviewed knew they had positive results, which could have influenced their responses to questions about community exposures and close contacts. Also, the report did not reveal if participants dined indoors or outdoors.

The National Restaurant Association released a statement Friday, calling the CDC report flawed for various reasons including the limited amount of participants and the wide ranging restrictions for dining in the 10 states involved in the study.

Correlation does not equal causation, the NRA said.

"It is irresponsible to pin the spread of COVID-19 on a single industry," the trade group said in a statement sent to Nation's Restaurant News. "Restaurants have historically operated with highly regulated safety protocols based on the FDA’s Food Code and have taken additional steps to meet the safe operating guidelines required by CDC, FDA, OSHA, federal, state, and local officials."

The restaurant industry organization said the foodservice industry has lost $165 billion in revenue from March through July. More than $131 billion of that revenue is tied to restaurants and bars. The industry is on track to lose $240 billion by the end the year.

According to Labor department, staffing levels at restaurants and bars remain remain nearly 2.5 million jobs below pre-COVID-19 peak in February.

The CDC and other health officials have said that COVID-19 is mostly spread by respiratory droplets released when people talk, cough or sneeze. Risk grows higher when people have more interactions with others and at longer frequencies, the agency says.

According to other studies, virus exposure in restaurants has previously been linked to transmission through air circulation and ventilation “even if social distancing measures and mask use are implemented,” the CDC said.

The agency acknowledges that mask wearing for the entire duration of dining is not feasible.

“Masks cannot be effectively worn while eating and drinking, whereas shopping and numerous other indoor activities do not preclude mask use,” according to the CDC report.