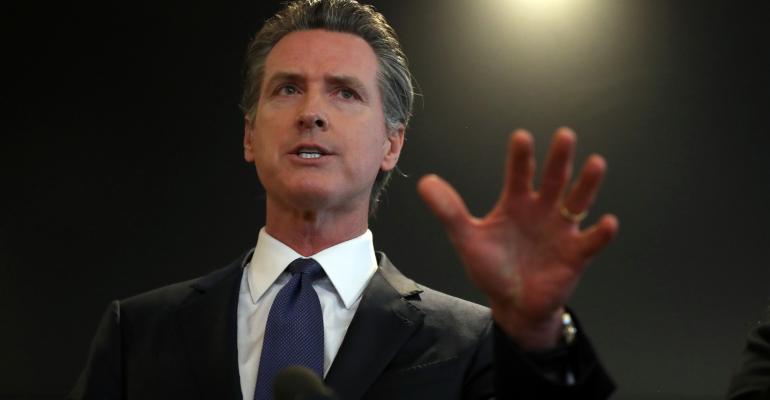 But even though the state says restaurants can open for dine-in, that doesn’t mean they will, say local officials

Newsom’s complicated Blueprint for a Safer Economy creates an updated color-coded tier system for each county to achieve certain COVID-19-reduction milestones before restrictions are gradually loosened. The framework is based on the average count of new coronavirus cases per 100,000 people per day, as well as the average positivity rate.

Counties will be assessed weekly. To advance through the tiers, counties must meet the criteria for a less-restrictive tier for three weeks before advancing to the next stage. If they fail to meet the tier standards, they can also be moved back to a more-restrictive phase.

Most of California’s 58 counties on Monday remained in Tier 1, which allows restaurants to open only for outdoor dining, takeout and delivery with modifications. Bars, breweries and distilleries that don’t serve food remain closed.

Los Angeles and surrounding counties, for example, as well as most of the San Francisco Bay Area remained closed for dine-in. At best, it would take three weeks of improved virus case numbers for any of those counties to progress to the next stage.

But seven counties — including San Francisco, San Diego and Napa counties — qualified for Tier 2 on Monday, which allowed them to reopen for dine-in at 25% capacity, or no more than 100 people, whichever is fewer.

However, reports indicate that San Francisco County health officials, however, have not indicated whether the restaurants will actually be allowed to open for dine-in just yet. The state blueprint leaves that up to county discretion.

According to the San Francisco Chronicle, Mayor London Breed said she would offer an update on restaurant reopening plans this week.

Statewide, eight mostly rural counties were listed in Tier 3, allowing dine-in at 50% capacity, or 200 or fewer guests. And three reached Tier 4, which allowed indoor dining at 50% capacity without the 200-person limit.

The California Restaurant Association, meanwhile, warned that Newsom’s plan would speed the permanent demise of 30% of the state’s restaurants. In a statement, Jot Condie, the association’s executive director and CEO, said issuing such strict mandates without any aid will devastate the restaurant industry.

With the state legislature about to adjourn, the CRA has been lobbying for a special session to address legislation that would give restaurants rent relief, for example, and allow them to work with insurers to cover some revenue losses.

“Restaurants cannot sustain themselves or their employees when they operate with strict capacity limits, which means the state should long ago have crafted a comprehensive aid package to help these small businesses hibernate,” Condie said.

According to the CRA, an estimated 1.4 million Californians worked in restaurants prior to the pandemic. Since March, between 900,000 and 1 million of those workers have been laid off or furloughed, with many still waiting to receive unemployment benefits.

An estimated 60% of restaurants in the state are owned by people of color, and 50% are owned by women. In surveys, the CRA found that 60% of those who received a Paycheck Protection Program loan said they would run out of money before the end of August; 63% said they had not received any rent relief; and 30% said they would either close permanently or close some locations.

Fewer than half of respondents (41%) said their businesses could remain viable at 50% capacity.

“Californians will soon look around our communities and see too many dark, empty store fronts, and it could have been prevented,” he said in the statement.