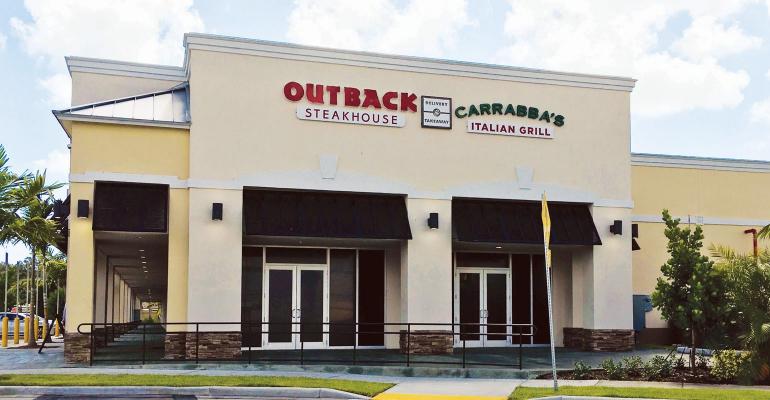 The Tampa, Fla.-based company, which also owns the Bonefish Grill and Fleming’s Prime Steakhouse & Wine Bar brands, said it now has four Outback/Carrabba’s express units, the first of which opened last year, and plans to open more this year.

The compo express units are dedicated to delivery and to-go as Bloomin’ Brands works to grab more off-premise consumer occasions.

“The smaller footprint concept will be utilized to expand our reach into both new and fill-in trade areas,” said Elizabeth Smith, Bloomin’ Brands CEO and chairman, in a first-quarter earnings call with analysts. “We will be patient and deliberate as we build this capability to meet expectations of customers in this all-important occasion.”

Smith said off-premise remains a “tremendous” opportunity for Outback and Carrabba’s, indicating that it could grow to 25 percent to 30 percent of sales with 80 percent of those incremental. In the first quarter, Smith said about 11.9 percent of Outback’s sales were in off-premise channels.

The CEO said that 70 percent of customers at the four existing Outback/Carrabba’s express units order items from both brands — which met the company’s hope that customers would “mix and match,” she said.

Smith said the two brands will continue to highlight off-premise sales opportunities through both third-party delivery services as well as in-house delivery programs, which for the past two years has provided delivery at about 160 Outback units and 80 Carrabba’s restaurants.

The two delivery platforms appear to appeal to different customers, Smith added, with the in-house service drawing family and family-bundle delivery orders while users of third-party services, such as Uber Eats, tend to attract Millennials who order later, around 8 p.m. or 9 p.m., and after the in-restaurant dinner rush.

Combined U.S. same-store sales were up 2.8 percent, with Outback posting a 4.3 percent increase, Carrabba’s up 0.9 percent, Bonefish Grill down 0.1 percent and Fleming’s Prime Steakhouse and Wine Bar up 2.9 percent.

Executives said sales were helped by investments in portion sizes and exterior renovations as well as the company’s cross-brand Dine Rewards loyalty program, which has more than 6 million members.

“This program is performing well and driving strong engagement across the portfolio,” Smith said, and it is encouraging loyal users to dine at other of Bloomin’s four brands.