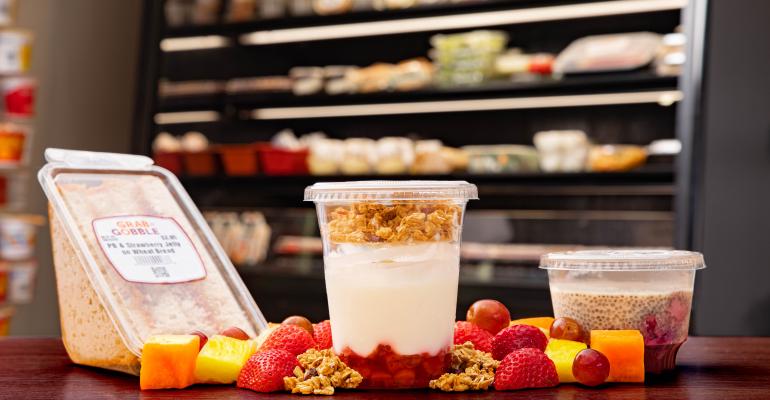 Grab and go and takeout breakfast here to stay

As consumers sheltered at home during the COVID-19 pandemic, foodservice establishments adapted by offering takeout, delivery, and curbside pickup. While much of the focus was on lunch and dinner, there were opportunities to make breakfast part of the mix.

People still wanted to order their morning meals from their favorite eateries, but they couldn’t dine in, so operators revamped the way they serve breakfast. Even after stay-at-home orders began to lift, operators continued to capitalize on the demand for off-premise breakfast, saying the trend will continue.

According to DoorDash’s mid-year report on food trends, breakfast order surged during the first half of the year.

Also, breakfast burritos were the seventh most ordered item on DoorDash during that time period.

Before the pandemic, the only takeout orders at Phoenix-based Matt’s Big Breakfast came from people calling the full-service restaurant. “Previously takeout was only 5% of our business,” said owner Matt Pool. “It quickly became the main focus.”

Three of the five locations stayed open during the pandemic. The chain’s Phoenix Sky Harbor International Airport location reopened in July, and a location in an office complex remained temporarily closed as of August. The three open locations adapted quickly to an off-premise model.

The team set up online ordering, partnered with third-party delivery companies, and even managed to order large amounts of to-go packaging before vendors sold out.

“Once California shut down, Arizona followed a day or two later,” Pool said. “I saw the writing on the wall. I ordered a ton of stuff before it really hit.”

The strategy worked, and orders came in. The team soon found out which breakfast foods travel well, and which foods customers were craving after being home for a few weeks.

Orders ranged from single items, such as the regular customer who ordered an omelet 43 times over the course of three months, to large orders, such as the Family Brunch, which consists of scrambled cage-free eggs with provolone cheese, applewood smoked ham, local organic baby spinach, griddlecakes with sweet cream butter and real Vermont maple syrup, homefries, and pepper bacon. There is a five-egg version and a 10-egg version of the Family Brunch, both served hot and ready to eat.

When it became clear that takeout and delivery would become the survival strategy for the early weeks of the crisis, Pool called a Zoom meeting and implored staff members to treat each takeout order as carefully and accurately as they had treated dine-in orders.

“Previously we viewed takeout as extra,” he said. “These are our new regulars.”

Some eateries closed temporarily so the owners could formulate a new plan.

Goldilox Bagels in Medford, Mass. shut down for 10 days at the start of the pandemic, then reopened with pre-paid, pre-ordered takeout only. Beginning every Monday at noon, customers can order online for Friday, Saturday, or Sunday pickup.

Ed Thill, who owns Goldilox Bagels with his wife Lindsey Gaudet, said people order everything from six bagels to three dozen bagels plus several pints of cream cheese. “You can order a whole weekend spread for your family,” he said.

Before the pandemic, Goldilox Bagels used to get about 300 transactions per day on Saturdays and Sundays. Many of the orders were from students at nearby Tufts University, who stopped in for a bagel or a sandwich.

Now the eatery gets 150 to 170 much larger transactions each day, typically a dozen or dozen and a half bagels, plus one or two 8-ounce tubs of cream cheese. Holidays and special events get larger orders.

“There was an uptick on Memorial Day,” Thill said. “People were shelling out more for lox, which is an expensive product, and chocolate chip cookies for their kids.”

Now that Tufts is reopening, as are surrounding businesses, Goldilox Bagels is taking some same-day orders, and some walk-up orders for sandwiches and other items. The eatery, which launched in 2019, paused its dine-in service.

“We’re not having anybody in the shop right now,” Thill said. “If someone wants to walk up and order, we have an order pad, we put it in the system, and the kitchen will make the order.”

For noncommercial foodservice, grab-and-go was gaining popularity among busy consumers, and the pandemic made portable foods more attractive than ever. At Virginia Tech, Dining Services expanded its Grab & Gobble program last year to accommodate the growing number of students who wanted the prepackaged meals. (The “gobble” part of the name is a reference to the school’s HokieBird mascot.)

Among the most popular items are blinis or mini pancakes with fresh strawberries and Nutella. “Students love them because they’re portable and snackable,” said Ben Marks, associate director of dining services at Virginia Tech. For people looking for plant-based foods, the chia seed pudding with almond milk and fruit is a big hit.

To keep the menu current, every semester dining services solicits feedback from students through focus groups and a student advisory committee. Students want convenience, variety, and speed of service, and grab-and-go answers those demands.

Among the most popular items are a sampler with apples and grapes paired with caramel sauce, fruit and yogurt parfaits in a variety of flavors, and fruit cups with grapes, strawberries and pineapple all fresh cut in house. “They seem to gravitate to quick energy from sweetness items,” Marks said.

The campus’ dining services also partners with national brands such as Chick-fil-A, Bruegger’s Bagels and Dunkin’. The on-campus concepts are not only fast and convenient, Marks said, but they also connect students with familiar brand experiences.

Grab-and-go is growing as more foodservice establishments implement safer alternatives to self-serve options, which are banned under many states’ COVID guidelines.

“We flipped the salad bar station to a yogurt and fruit bar with granola,” said Dorothy DeCaprio, regional director of operations for Morrison Healthcare Yale-New Haven Health in New Haven, Conn. “That used to be a self-serve option, but now obviously with COVID we had to switch it to grab and go.”

People still like to choose their fruit and yogurt combinations, so associates packaged individual servings of the parfaits in a variety of options.

But the bigger challenge was the change in how they purchased coffee. The self-serve coffee station was replaced by an associate preparing coffee to order. The fountain beverage station is also gone, replaced by bottled drinks.

“Everyone comes in and grabs a cup of coffee,” DeCaprio said. “We could not do that anymore. We had to have an associate stand in front of the coffee.”

At first, customers did not like having to tell the associate how they wanted their coffee instead of getting it themselves.

“The customers and associates got used to it,” DeCaprio said. “Associates started to remember people and were able to prepare their coffee for them.”

Foodservice sales are still down at Morrison Healthcare Yale-New Haven Health, but that’s due to a decrease in foot traffic. Workers who could work from home offices are still doing so, and healthcare systems are offering more telehealth services, which results in fewer patients and providers on-site. Still, the bigger trend is that some of the adaptations will become permanent, partly due to COVID-19 and partly because consumers simply like quick, portable breakfasts.

“I don’t think in the near future anything self-serve will come back,” DeCaprio said. “There might be a one-sided salad bar where you have an associate giving them what they want, but customers can’t touch the tongs.”

Pool said the open locations of Matt’s Big Breakfast have adapted to the new takeout-focused reality, even after limited capacity dine-in restarted. There is an area at the counter where customers can pick up their takeout orders, and separate tables for delivery drivers with Uber Eats and other food ordering platforms to pick up orders.

“It took the pandemic to make us realize we should become more efficient,” he said. “Now the goal is, let’s not get stuck on this. If this is the new normal, what can we do to modernize.”