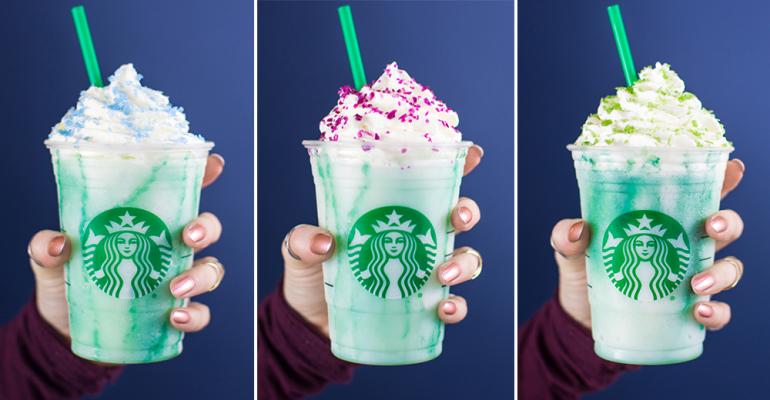 Starbucks Corp., for its latest extremely limited-time offer, is turning a drink order into a game of chance.

The Crystal Ball Frappuccino, launched Thursday and available through Monday, while supplies last in the United States, Canada and Mexico, is a crème-based, rather than coffee-based, peach-flavored frozen drink with turquoise sparkles in it. It’s topped with peach-flavored whipped cream and candy sprinkles in one of three randomly applied colors — blue, green or purple.

The sprinkles are kept in three opaque containers behind the bar. The barista chooses one of them each time a Crystal Ball Frappuccino is made.

Starbucks has offered these extreme LTOs for several years, including, a drink celebrating the 20th anniversary of the chain’s Frappuccino iced, blended drink in 2015. The Birthday Cake Frappuccino, also available for a long weekend in April, was made with vanilla bean and hazelnut cream topped with pink whipped cream.

The Birthday frapp reprised for the Frappuccino’s 21st anniversary in April of 2016, and then Starbucks struck gold with the color-changing Unicorn Frappuccino, which turned from purple-and-blue and sweet to pink and sour as you stirred it.

The Halloween-themed Zombie Frappuccino followed, with tart apple and caramel flavors topped with pink whipped cream and red mocha drizzle, intended to simulate brains and blood, respectively — and a Christmas Tree Frappuccino that had a peppermint mocha base and was garnished with a matcha-colored whipped cream “tree,” a caramel drizzle “garland” and candied cranberry “ornaments,” plus a strawberry on top.

“Throughout the year Starbucks offers Frappuccino blended beverages that are routinely available for a limited time, and each Frappuccino beverage’s inspiration or story is unique to the beverage,” a Starbucks spokesperson said via email.

“The Crystal Ball Frappuccino is crafted to resemble a crystal ball, with the mystical sparkles that top the beverage foretelling the customers’ fortune.”