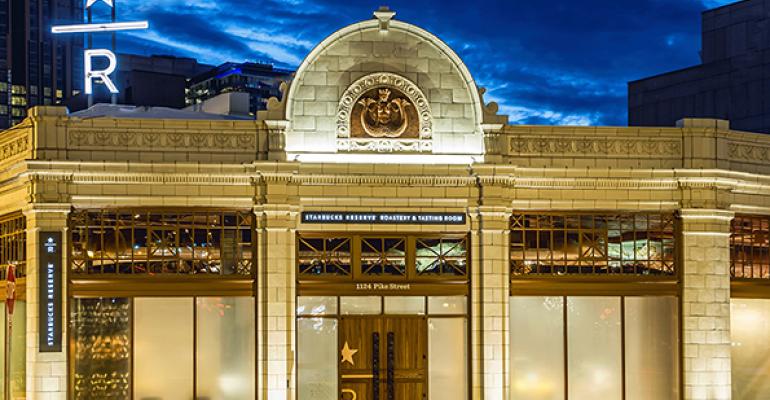 The multipronged plan revealed at the company’s biennial investor meeting in Seattle marked the beginning of a new era of growth for the coffeehouse operator, at a time when U.S. traffic showed signs of softening in the fourth quarter. The company projected reaching $30 billion in revenue by 2019, with 30,000 locations systemwide.

Transformational innovations will not only drive traffic and frequency, but will usher in “a new era of customer convenience,” Starbucks chief operating officer Troy Alstead said.

“Starbucks’ business, operations and growth trajectory around the world have never been stronger, and we are more confident than ever in our ability to continue to drive significant growth and meet our long-term financial targets,” Alstead said. “We have more customers visiting more stores more frequently in the U.S. and around the world than any time in our history. And we expect both the number of customers visiting our stores and the amount they spend with us to accelerate in the years ahead.”

Janney Capital Markets analyst Mark Kalinowski predicted that Starbucks’ market capitalization will surpass McDonald’s Corp.’s by the end of 2025, becoming the industry’s largest within the next 11 years.

Take a look at some key points of Starbucks’ five-year plan:

Starbucks launched mobile ordering Thursday in Portland, Ore., a platform the company plans to roll out nationwide in 2015.

The company’s plan for mobile over the next few years is perhaps its most significant, and could make Starbucks “arguably the most powerful mobile ecosystem of any retailer in the world,” Starbucks chief digital officer Adam Brotman said.

Starbucks already has 8 million active loyalty card users, and 16 percent of transactions in the U.S. are conducted via smartphone, he said.

Letting guests order and pay ahead will attract more people to Starbucks’ loyalty program to earn rewards. Those customers tend to spend about three times more than customers who are not members of the loyalty program.

The move will also give customers “the gift of time” by boosting frequency, since ordering and paying ahead will allow them to skip the line — a bonus that will also improve throughput for those standing in line.

Starbucks is also working to add another layer to mobile ordering with food and beverage delivery.

“Green Apron delivery” could be available in some high-density locations, with a production area devoted to mobile orders for delivery only.

“Contracted delivery” would more likely be available in typical urban and suburban locations where existing stores could work with a third-party delivery partner. This program will likely appear in select markets in mid to late 2015, Brotman said.

“We think we have a lot of ingredients to make a new way of payment happen,” he said.

Starbucks is in talks with other merchants to create partnerships that would let loyalty customers earn rewards that could apply at other retail locations using pre-loaded Starbucks cards — essentially a debit card with rewards.

Starbucks has long positioned itself as a premium coffee brand, but company chairman, president and chief executive Howard Schultz aims to push further into high-end coffee to compete with elite independent brands cropping up around the country.

On Friday, Starbucks will open its first Starbucks Reserve Roastery and Tasting Room in Seattle, an interactive coffeehouse and roasting facility that produces small-lot, ultra-premium coffees, and that Schultz said would  “up-level” the brand’s positioning.

“We are building a new brand within Starbucks,” he said, a place that he described as “the Willy Wonka of coffee,” offering a “sexy” experience, with theater and romance like a “magic carpet ride.”

The logo is a simple star symbol and the letter R, and more than 100 Starbucks Reserve retail stores are scheduled to open across the U.S., with coffees produced at the 15,000-square-foot Roastery in Seattle.

Seattle chef Tom Douglas has developed the menu at the flagship location, including his Serious Pie-brand pizzas, along with pastries, sandwiches, salads and sweets designed to be paired with the complex flavors of the coffees offered.

After Seattle, the next Roastery will likely open in Asia in 2016, and the brand will grow in other major cities around the world. Starbucks Reserve will also appear as a packaged product.

Starbucks has already seen “validation” for its acquisition of Teavana two years ago, he said.

The introduction of Oprah Chai Tea in April, followed by the Shaken Iced Tea platform over the summer, lifted sales by 2 percentage points beyond expectations, Ryan said. Tea is also a lower-cost product that offers high margins.

“Tea is big business for us, and we are going to continue to go after tea,” he said.

Existing Teavana locations will shift away from a retail focus to expand the Tea Bar, Ryan said. Products and formats will make tea more accessible, with offerings like chai, iced teas and more sachet — or tea bag — teas, rather than loose leaf.

Tea will also grow through the consumer packaged goods channel, including both packaged tea and ready-to-drink offerings.

Starbucks may be a beverage brand, but food sales in the U.S. have been driving traffic and average checks. The company has pledged to double its domestic revenue from food to more than $4 billion over the next five years.

By the end of 2019, roughly 20 percent to 25 percent of U.S. locations will offer the Starbucks Evenings platform, with beer, wine and snacks designed to give guests a reason to visit later in the day. The company expects the expansion to add about $1 billion in revenue. Starbucks Evenings is currently available in about 32 locations.

Starbucks has significantly boosted its breakfast sales with the rollout last year of its La Boulange line. The coffeehouses will soon offer more lunch items and a more robust grab-and-go selection, Ryan said.

To enhance the “lobby experience,” where guests can peruse retail items while they stand in line, the chain may add a mobile self-scan-and-pay option to skip the line at the cash register.

In addition, Starbucks plans to grow its retail locations with a number of different formats, including express and kiosk units, mobile trucks, and more drive-thru locations.

Ryan acknowledged that some may wonder whether Starbucks is reaching a saturation point. The chain has 21,000 units systemwide, with about 11,000 U.S. locations.

But the company has found that sales grow in markets where there are more units per capita, indicating a “network effect of presence” that essentially trains consumers to look for Starbucks locations.

The new formats planned, such as kiosks and trucks, offer room for domestic expansion, and the company plans to work with licensing partners to add more locations with key real estate. Over the next five years, the company plans to add 3,500 units in the Americas, which it projects will increase revenue by $7 billion.

International offers even more room for growth, Ryan said. Starbucks plans to more than double its unit count in mainland China to 3,400 locations by 2019.

The company is in the process of acquiring operations in Japan, which will allow for accelerated growth there. The deal is expected to close in the second quarter of 2015. Japan is Starbucks’ second largest market in terms of retail unit sales, with more than 1,000 locations.

The company also has plenty of room to grow its packaged goods business internationally. Starbucks products are currently distributed in 39 countries, including the U.S. The company expects its Channel Development business to grow revenue by 60 percent by unlocking untapped packaged goods opportunities in China and the Asia-Pacific region.