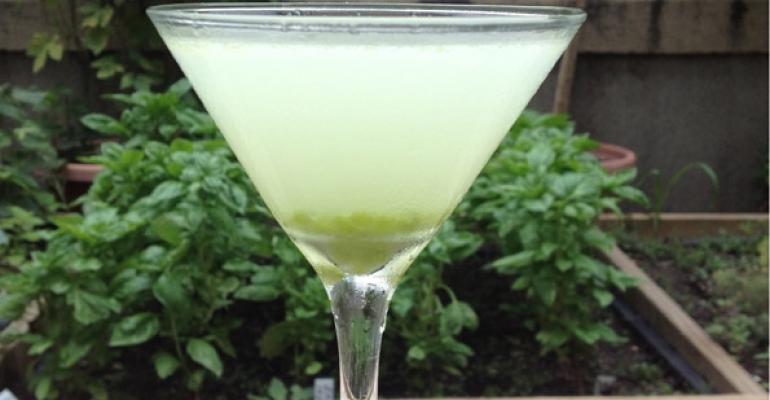 Satisfying the craving for tongue-tingling sensations, mixologists are muddling, infusing and foaming spicy ingredients into cocktails like never before.

“Every year, especially in the summer, more people come in and ask for spicy cocktails,” said Juan Coronado, cocktail innovator of Think Food Group, celebrity chef-owner José Andrés’ Washington, D.C.-based restaurant collection. “I think they are looking for something out of the ordinary and savory.”

Coronado’s repertoire of spicy sensations includes a fresh watermelon cocktail spiked with an infusion of Scotch whisky and kimchi, the fiery Korean pickled cabbage, and a tequila drink enlivened with harissa, the North African chile paste.

The latter libation, the Harissa Fizz at Zaytinya, Think Food Group’s Mediterranean restaurant in D.C., is made by shaking a scant teaspoon of house-made harissa with silver tequila, ginger liqueur, egg white, house-made lemon soda and simple syrup. The zesty condiment lends a blush of color and a hard-to-describe tingle on the palate.

“You would never guess there is harissa in it because it is delicate and beautiful, not fiery,” said Coronado. “It surprises you.”

Such piquant potions are a manifestation of a growing consumer demand for spicier flavors. The research firm Datassential tracked more than 120 terms for spicy food on chain and independent restaurant menus. Of those terms, more than 70 grew in popularity between 2008 and 2012, including Thai chile, roasted poblano and chipotle. The fastest-growing descriptors are Southeast Asian sriracha, Chinese chile oil and North African harissa.

Restaurant consultants Baum + Whitman declared “bars are where the flavor action is” in their roundup of the hottest food and dining trends for 2013, citing such evidence as flavored vinegars, smoked ice cubes and chocolate-chile bitters in drinks.

Juvia, the Miami Beach hotspot that blends French, Japanese and Peruvian cooking styles, has its own lively libation, the Aji Amarillo Caipirinha. It’s a ramped-up version of Brazil’s national cocktail made by muddling two to four pieces of aji amarillo, a yellow chile that is a hallmark of Peruvian cuisine, with lime wedges and sugar in a mixing cup. The heady sugarcane spirit cachaça is added and the mixture is shaken, strained and served over crushed ice.

“We wanted to have our own version of the caipirinha here because we have a vast number of tourists from Brazil, and they really take to it,” said beverage director Armand Rodriguez.

“It gives a flavor that makes you scratch your head and ask what’s going on,” said Lockman, who said he keeps the piquant elixir handy to jazz up Margaritas and lemon drops on request.

As the spicy drink trend evolves, some mixologists are getting more imaginative in their incendiary effects. Lockman, for one, shoves three sliced fresh jalapeños into a bottle of the French herbal liqueur Green Chartreuse and lets its steep for about five days. The infusion brings complex flavor impressions, as well as heat, to the Mint Julep Kick, which also contains bourbon, peach liqueur and fresh mint.

The crown of spicy foam on Lockman’s Kyoto Experiment, a shaken sake and pear vodka cocktail, is a mixture of muddled serranos, egg white and lemon dispensed from a CO2-propelled whipped cream charger. Sipping the sake and pear drink through the serrano foam creates a dramatic contrast on the palate, Lockman said.

Also finding novel ways to add fireworks to cocktails is Jason Wiles, resident mixologist of Poste Moderne Brasserie, a Kimpton restaurant in Washington, D.C. For one, he infuses dried arbol chile in apple cider vinegar to lend acidity as well as heat to his Mex on Fire. The drink is a smoky, spicy affair that also contains mezcal, reposado tequila, Velvet Falernum and orange bitters. It is shaken and served on the rocks with a smidgen of arbol chile for garnish.

“The drink has a cool cucumber flavor, but when you bite into one of the little jalapeño spheres the heat bursts out,” Wiles said.