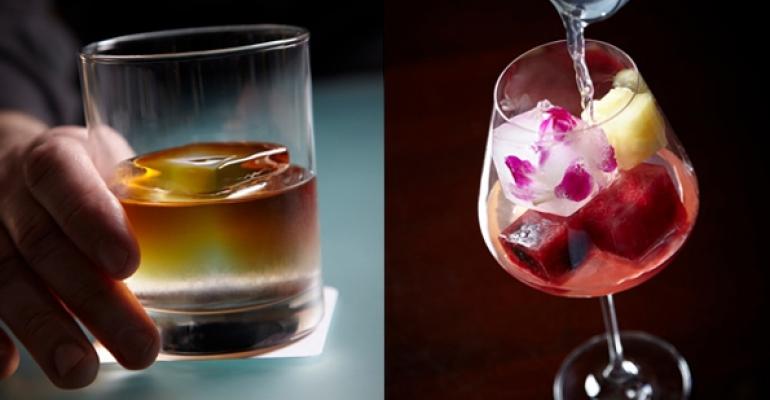 Bars are infusing ice with flavorings and tapping artisanal producers

Bars are paying more attention to ice with unique flavors, sizes and shapes. A growing number of establishments now have full-fledged ice programs that produce cocktails that are more attractive, better tasting and worthier of a premium tab.

“The quality of ice that bars serve has become just as important as the quality of their spirits, juices or mixers, and has a bearing on the presentation of finished drinks equal to the choice of glassware,” Jack McGarry, bar manager of New York’s The Dead Rabbit Grocery and Grog, told Class magazine.

Bartenders at the Trump International Hotel & Tower Chicago follow that sentiment. Their house-made flavored ice cubes add distinction to the Opulence 5, a signature cocktail guests enjoy at The Terrace at Trump, a rooftop restaurant and bar. The aptly named libation, priced at $55, is a medley of Champagne, artisan vodka, elderflower liqueur and five different flavored cubes that slowly melt and diffuse layers of flavor over the palate.

The cubes, frozen in molds in the hotel’s pastry kitchen blast freezer, showcase their unusual flavors, colors and garnishes. In the glass is a pair of two-inch by two-inch cubes, one frozen with rose petals and one with raspberry stock, nestled with three one-inch by one-inch cubes with blackberry, cinnamon-apple and pineapple flavors, respectively.

“The cubes with the more intense flavors are the smaller ones, because a little of those goes a long way,” food and beverage director Christopher Roberts said.

The first sip of the Opulence 5 is similar to a Champagne cocktail, Roberts said, but as the cubes gradually melt, the flavor becomes more like a traditional punch. “By the time you are done with it, it really is a different drink.”

At Rebar, the Trump’s cocktail lounge, a smoked ice cube adds nuance to the Hirsch Gupta, a mix of bourbon whiskey, Creole bitters and flamed orange peel. The smoked cubes are made by exposing crushed ice to cedar chips smoke from a handheld smoker, then melting it all down and refreezing it into large cubes.

“We use crushed ice because it has more surface area [to absorb smoke] than water or ice cubes,” Roberts said.

At Pabu in Baltimore, a Japanese izakaya part of Mina Group, the Keiba Yutaka is a riff on the Mint Julep, made with bourbon and ginger liqueur over a stylish mint-flavored ice cube topped with a fresh mint leaf. Lead bartender Nick Jones explained that the cubes are made simply by blending fresh mint with water, straining out the leaves and freezing it in molds.

“This is a way to add mint flavor to the drink without having messy mint leaves in the glass, so there’s more esthetic appeal,” Jones said.

At The Dead Rabbit, known for historically accurate renditions of 19th century cocktails, McGarry takes a traditional approach to ice. He hand-carves large blocks of crystal-clear ice bought from a local ice artisan into chunks and shards for drinks. It’s a throwback to practices that long predate the mechanical ice machine, he explained, going back to the early 1800s, when Frederic Tudor, the Ice King of Boston, cut lake ice into blocks for national and international distribution.

“Americans were the first people to really adopt ice in their mixed drinks,” said McGarry. “The British and Europeans were very skeptical at first.”

Not only does clear, hand-hewn ice look more striking than ordinary ice cubes, but it also makes a tastier, less diluted drink, McGarry said. Commodity cubes, which contain air bubbles and water impurities, tend to be cloudy and melt fast. In contrast, a chunk hacked from one of his dense, pure blocks has less total surface area to absorb heat and thus melts slowly and dilutes drinks less.

Hank’s on the Hill in Washington, D.C., also buys ice by the block from a local vendor. It is carved at the bar into two-inch by two-inch cubes for straight spirits and one-inch by one-inch cubes for Collins drinks and stirred drinks. Shaved ice from the block goes into juleps and smashes, and the leftover chips are cracked and used to chill martinis.

“Carving ice is a matter of repetition,” said Gina Chersevani, the “mixtress” who heads Hank’s bar. “It’s similar to the way chefs learn to cut vegetables. It takes them a long time when they start. Once they learn, it goes very quickly.”