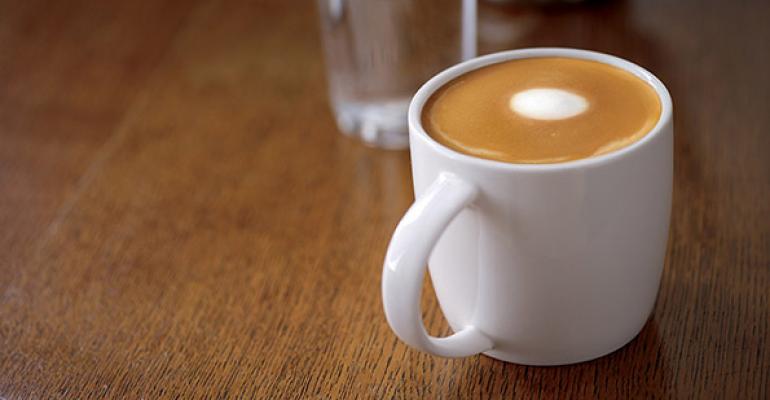 <p>Starbucks Flat White coffee: Two ristretto shots topped with a thin layer of &ldquo;microfoam,&rdquo; made by aerating the milk for 3 to 5 seconds &mdash; less time than for cappuccinos or lattes &mdash; and a latte art dot.</p>
Menu>Beverage Trends

Specialty coffee on the rise at restaurants

For many Americans, coffee is no longer merely a caffeine delivery system.

The majority of coffee consumed in the United States, both in terms of dollars spent and volume, is now “specialty coffee,” according to the Specialty Coffee Association of America. Restaurants are responding with new varieties of the country’s favorite hot drink.

The SCAA defines specialty coffee loosely. It has to be made from coffee beans from an “accurately defined area, and which meets the highest standards for green coffee and for its roasting, storage and brewing.” It must also have “a unique quality, a distinctive taste and personality different from, and superior to, the common beverages offered.”

Last summer, Chick-fil-A said it was the only quick-service chain whose coffee fit the standards of specialty coffee, when it introduced an upgraded brew. The Atlanta-based quick-service chain partnered with Thrive Farmers Coffee to source beans directly from coffee farmers. Thrive roasts and blends the coffee to pair well with Chick-fil-A’s food.

The brew has notes of cocoa and caramel, as well as the flavors of warming spices, such as nutmeg and cinnamon, and aromas of hibiscus, jasmine and honeysuckle, Thrive Coffee Farmers chief coffee officer Tracy Allen told Nation’s Restaurant News at the time.

Chick-fil-A is putting considerable promotional effort behind its coffee. Throughout February, it is giving away 12 ounces of hot coffee or 16 ounces of cold-brewed iced coffee, with no additional purchase required. The offer is limited to one cup per customer per visit.

Other chains are also ramping up their coffee offerings. Among coffee specialists, Dunkin’ Donuts has expanded its line of iced coffee offerings. The quick-service chain introduced a lower-calorie version of its frozen blended Coolatta beverage. The Coolatta Lite has between 33 percent and 80 percent fewer calories than its full-calorie counterpart, and is available in frozen coffee, frozen caramel coffee, frozen French vanilla coffee and frozen hazelnut flavors, as well as non-coffee flavors such as orange, strawberry and vanilla bean.

Canton, Mass.-based Dunkin’ Donuts also introduced a frozen version of its coffee-and-chocolate Dunkaccino. Both are being introduced in the Northeast this month, and will be rolled out nationally over the course of the year.

Meanwhile, Starbucks has been playing with its coffee-and-milk mix. At the beginning of the year, it introduced the Australian version of cappuccino, called a Flat White. Made with two concentrated ristretto shots of espresso and topped with microfoam — made by aerating the milk for 3 seconds to 5 seconds to give it smaller bubbles than typical foam — it has less milk than a cappuccino or latte, but more than a macchiato.

On Feb. 17, the Seattle-based chain will also roll out coconut milk as a non-dairy, soy-free milk alternative. Like its soy milk, the coconut milk will cost an additional 60 cents.

A Starbucks spokeswoman said a milk alternative that didn’t have dairy or soy is the second most requested customer suggestion the chain has received, with more than 84,000 people asking for it.

Last year, Dunkin’ Donuts introduced almond milk at many of its locations, an option Starbucks rejected because it said it was concerned about customers with nut allergies.

Other chains have focused on new flavored coffees. Tim Hortons has rolled out a line of salted caramel-flavored items, including a doughnut, doughnut hole and sticky bun, and a latte and iced cappuccino with similar flavor profiles, available through April.

Taco Bell has extended its cobranding efforts with Cinnabon by introducing a coffee flavored like its Cinnabon Delights doughnut holes. Cinnabon Delights Coffee was introduced on Jan. 29, and is available for an unspecified limited time.