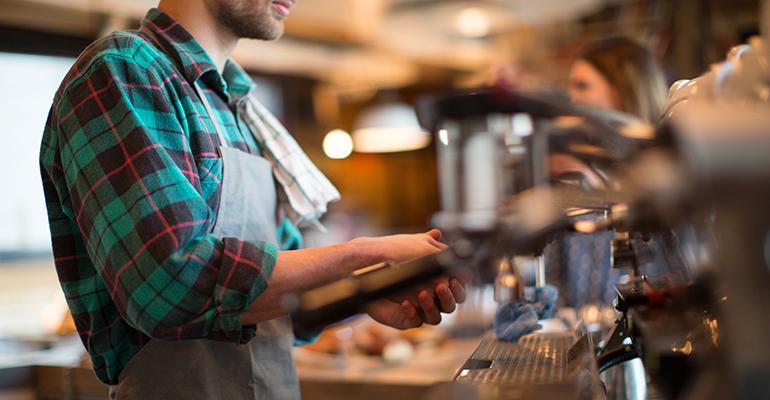 Luis Alvarez / Stone
According to Euromonitor International data, traffic through U.S. coffee shops fell 22% in 2020, compared with a 15% contraction in the restaurant industry overall.
Menu>Beverage Trends

With traffic down 22%, the segment is making necessary adaptations and investments

The pandemic’s impact on coffee shops was significant. While no segment of the U.S. restaurant industry was spared, the importance of morning commuter traffic to away-from-home coffee consumption meant the initial effects of lockdowns and work-from-home orders on channel demand were especially severe. According to Euromonitor International data, traffic through U.S. coffee shops fell 22% in 2020, compared with a 15% contraction in the restaurant industry overall.

Over the course of 2020, however, coffee shop operators adapted, making major investments in drive-thru, mobile ordering and takeaway, accelerating a process which had been in motion for years. At the same time, consumer behavior evolved as group ordering picked up considerably, sending average ticket size through coffee shops steadily higher. In contrast to traffic, sales growth through coffee shops outperformed the U.S. restaurant industry overall, contracting 16% versus a 21% contraction in overall sales. While coffee shops have not been a major component of delivery traffic compared with many other quick service categories, the segment has led the way in terms of mobile-led service models, allowing for a (relatively) successful pivot to the reality of 2020.

Going forward, this emphasis on quick, increasingly contactless service is expected to intensify, particularly as well-resourced competitors like Coca-Cola and others step up their investments in this space. As consumers return to coffee shops, smartphones will remain central, with new business models increasingly linking home consumption, retail locations, coffee shops and advanced vending machines.

Unlike other quick-service restaurant categories, there is considerable interplay between coffee shops and home consumption. Over the last 10 to 15 years, consumers around the world have repeatedly upgraded their home coffee consumption during economic downturns, with premium packaged coffee for home use still notably cheaper per cup than daily trips to cafes and coffee shops. The U.S. was no exception in 2020, with shipments of coffee machines up 10%, the strongest performance for the category in at least 15 years, according to Euromonitor International estimates. Over the next 1 to 2 years, this heavy investment in home coffee equipment could prove a drag on away-from-home coffee consumption. At the same time, anything which drives consumption of premium coffee at home can drive sales of packaged coffee via both chained and independent coffee shop operators, particularly those able to promote regular purchasing with subscriptions and automatic replenishment.

In the post-pandemic environment, boundaries are expected to blur further between away-from-home channels — such as coffee shops and vending machines — and home consumption, with smartphones increasingly serving as the linking factor. Smartphones could potentially carry consumer preferences and facilitate purchases across a range of different points of sale, all under a single brand. Among several major players, this process is already underway — in January 2021, Starbucks reported that around 50% of U.S. company-operated store revenue came via its loyalty app, offering a powerful, ongoing exchange of data and engagement. Likewise, players such as Stumptown have long combined coffee shop businesses with subscription services, with coffee shop visits creating a path to regular home consumption and back. Meanwhile, although plans are still in the early stages, Coca-Cola’s strategy for Costa Coffee in the U.S. will likely include a combination of coffee shops, advanced vending machines, and a heavy emphasis on ready-to-drink coffee products. The company purchased automated coffee kiosk manufacturer Briggo in October 2020, rebranding the machines as Costa Coffee Barista Bots. Here again, smartphones could potentially connect all the various pillars of Costa Coffee’s strategy, with smartphone ordering already a component of Briggo’s machines.

Notably, all these initiatives come from several of the largest drinks companies on Earth — for smaller chains and independents, the post-COVID environment carries real challenges. In addition to the enormous pressures brought on by the pandemic, a lower-contact, more takeaway-focused coffee industry could potentially make it far more difficult for smaller operators to differentiate themselves. As more coffee shop occasions become takeaway occasions made via smartphone, the practical difference between the average coffee shop and, say, an advanced coffee vending machine becomes more tenuous. What’s more, while there are a host of apps allowing independents to take advantage of smartphone ordering, there is a practical limit to how many individual apps consumers can be expected to use on coffee shops.

That said, Euromonitor International currently projects sales through U.S. coffee shops to approach $50 billion by 2025, representing 10% average annual growth from the low of 2020. While pressures on independent coffee shops are very real, there is also an unquestionable ongoing shift toward higher consumption of “prepared coffee” — be it via vending machines, coffee shops, ready-to-drink products, or elsewhere.