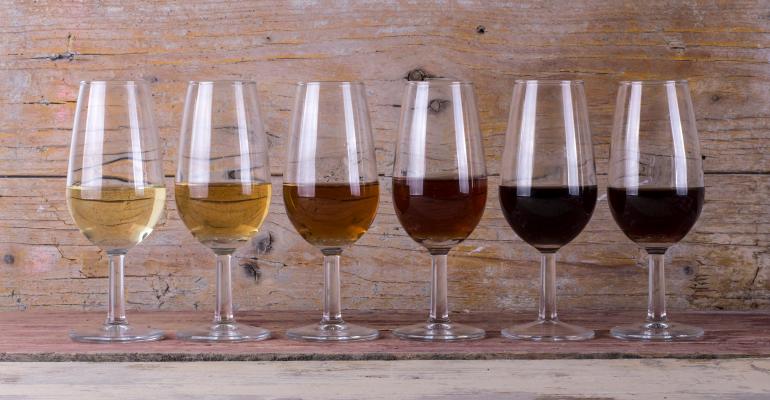 Sherry — the beautiful, fortified wine from southern Spain — is victim to some misconceptions and, sadly, continues to see sales drop around the world. For anyone who cares about authentic, unique beverages, this is cause to circle the wagons in defense.

“Sherry is one of the broadest and most interesting categories in the wine world,” said Amanda Reed, beverage director at Seattle’s Heartwood Provisions. While most guests don’t order it on their own, she finds great results when she recommends they do. “It’s easy to fall in love with sherry.”

Sales in the U.S. have remained relatively low for decades, but in once hugely supportive export markets, like the U.K., the decline is particularly shocking.

According to the Consejo Regulador de Los Vinos de Jerez, which tracks sherry around the world, sales in the U.K. dropped from 210,000 hectoliters in 2002 to around 100,000 hectoliters by 2015. Looking at sherry’s other top markets, this pattern holds.

But the good news is that sherry continues to win over passionate advocates and land prized placements on wine lists at high-end restaurants and bars around the country.

“If I could pour an entire menu of sherry, I would,” said Jordan Egan, beverage director at the forthcoming restaurant Simone in Los Angeles. “The versatility with food is unparalleled.”

Reed agreed, saying the biggest misconception about sherry is that it’s sweet.

“But sherry has a broad scope and can be applicable throughout a meal,” she said. “A Fino or Manzanilla is a great aperitif, with its light body and high acidity activating your taste buds. An Amontillado or Oloroso can be a perfect complement to a hearty meal, and a PX or Moscatel is dessert in a glass.”

The production of sherry is one of the longest-running in the wine world. For nearly 3,000 years, it has been closely tied with the culture and history of the Jerez region of Spain, with the first vines brought to the region by the Phoenicians in 1100 B.C. Over time, the region — composed of three towns forming the “Sherry Triangle” — has adopted the influence of different civilizations, including Greeks, Romans and Moors.

Dry sherry styles are made from the Palomino grape, while Pedro Ximenez and Moscatel grapes make sweeter styles. Using a combination of long aging, oxygen exposure, a dash of fortifying alcohol and one of the most complex aging systems in the wine world, sherry is in a class all its own.

There are two main categories of sherry: those that go through biological aging and those that go through oxidative aging. On the drier side, and exhibiting an intense acidity, are Finos and Manzanillas, which are fortified with grape spirit to bring the alcohol level up to about 15-percent alcohol by volume. These biologically-aged styles develop under a film of yeast, or flor, that grows naturally on top of the wine in the barrel, protecting it from the influence of oxygen and leading to expressions that are prized for their freshness, lightness and saline tartness.

The Amontillado and Palo Cortado styles often lie in the middle, seeing time under flor, as well as time exposed to oxygen. This often gives them a hybrid of the two worlds, showing a saline crispness coupled with a nutty character and richer finish.

And on the oxidative aging end of the spectrum are the Oloroso sherries. They are fortified to 18- to 20-percent alcohol by volume, killing off any developing flor and leaving the wine to fully oxidize. They can sometimes age for decades in the barrel and can be dry or sweet, depending on the final expression wanted by the winemaker.

Lastly are the sweet styles of sherry: Pedro Ximenez, Moscatel and “cream” sherries. These can either be Olorosos with sweet grapes blended in or made solely from grapes that have been dried before fermentation, leading to rich, dark and viscous wines.

But despite this vast range of styles, average consumers must often be educated in the basics.

“It’s rare that guests order sherry on their own accord,” said Kim Cavoores, assistant beverage director at Maiolino in New York City. “Many just think of the thick, syrupy stuff grandma used to drink.”

Many beverage directors have embraced sherry as an essential ingredient in their cocktail programs.

“When I’m crafting a cocktail and it feels like it’s missing something, sherry tends to be the answer,” Reed said. “I love Fino in bright, fresh drinks. Amontillado and Oloroso work well for winter drinks, and the sweeter styles are great for pairing with richer dishes or dessert. One of my favorite pairings is our foie gras with Moscatel sherry. Perfection!”

Sherry can also work with or as a replacement for vermouth.

“It adds a salty nuttiness and even a bit of texture when using the oxidative-aged styles,” Egan said.

Offering guests a complimentary pour of sherry can turn them on to a whole new category, while not hurting costs.

“Sherry is great for profit-margin due to its affordability and slightly longer shelf stability,” he said.

It’s quite possible that sherry should have two distinct titles: the most underappreciated beverage and the perfect wine for food pairing. And with the help of intrepid tastemakers, sherry may one day shed its unfair associations and rise again to the exalted status it deserves.