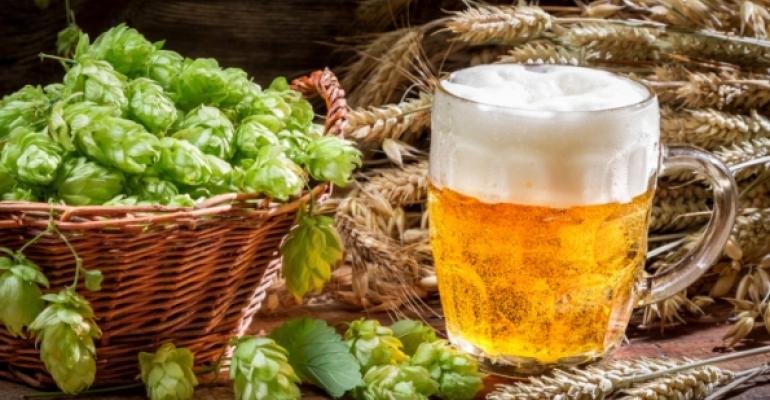 A primer on beer hops

David Flaherty has more than 20 years experience in the hospitality industry. He is a certified cicerone and a former operations manager and beer and spirits director for Hearth restaurant and the Terroir wine bars in New York City. He is currently marketing director for the Washington State Wine Commission and writes about wine, beer and spirits in his blog,&nbsp;Grapes and Grains.

As demand for craft beer rises in restaurants, consumers are becoming more savvy with their knowledge of brewing ingredients and processes.

At the heart of this movement is the public’s insatiable appetite for hops. Taking a brief primer on them will allow your staff to join the conversation.

Beer has been an integral part of life for thousands of years — so much so that workers at the Great Pyramids of Egypt are thought to have been paid in beer — but it wasn’t until just over a thousand years ago that beer as we know it today began to incorporate one of its most prized and distinctive ingredients: hops. Today, beer drinkers’ fascination with this unique plant has skyrocketed, and heavily hopped styles such as India Pale Ale have roared into fashion, dominating sales and garnering top ratings.

Prior to the year 1,000 A.D., brewers used many different roots and herbs to add flavor and attempt to balance the malty sweetness of their beers. Things like bog myrtle, yarrow, cinnamon, wild rosemary and juniper were common ingredients, making up a category of historical styles referred to as “gruit beers.”

The first hopped beers appeared around the turn of the second millennium in the city of Bremen in northern Germany, and their unique taste began to take hold. From there, their popularity steadily spread through the great beer producing regions of Europe and, by the year 1600, hopped beers were the norm, not only because of their mouthwatering bitterness, but because of hops’ natural preservatives that allowed beer to be transported longer distances without spoiling.

Hops are the dried cone flowers of the female Humulus lupulis plant, a climbing vine classified in the nettle family and closely related to marijuana. Hops are cultivated between 35-degree and 55-degree latitudes in both the southern and northern hemispheres, with many of the most prized varieties hailing from classic Old World regions like Germany, the Czech Republic and England.

In the New World, Yakima Valley in Washington State is home to most of the hop production in the United States. The cones themselves are where the magic lies, as they contain the oils, predominantly lupulin, that give beer both its bitter backbone as well as its preservative and aromatic qualities. Much like wine grapes, hops take on the character of an individual region’s climatic influences, resulting in beer styles that showcase specific varieties from specific regions.

Beer is essentially made from four simple ingredients: grain (often barley), yeast, water and hops. The balance of a beer is a teeter-totter between sweetness and bitterness, with the malted grain providing the former, and the hops the latter. Too much of one or the other and the resulting beer can drink syrupy sweet or be off-puttingly bitter.

These two competing, yet intertwined, forces are brought together in the boiling stage of beer making where the unfermented beer meets its first addition of hops. They are introduced at the beginning of this phase, resulting in the oil’s alpha acids being isomerized, which gives the resulting beer its bitterness, yet yields very little aroma or flavor. Hops used at this stage are known as bittering hops.

Near the end of the boil, another set of hops, known as aroma hops, are added, which gives the final beer its signature taste and smell.

But today’s brewers don’t stop there; their fascination with hops has led to much experimentation. Hop additions are now commonly done at more stages throughout the boiling phase, as well as being added to the final fermented beer — a technique known as dry-hopping — resulting in boatloads more hop aroma and flavor. Beer aficionados pride themselves on being able to identify each variety of hop by their characteristic flavors and aromas, which range from piney to fruity, and spicy to herbal, with all manner of expression in between.

These days the most commonly recognized craft beer style, a virtual showcase for hops, is India Pale Ale. Originally brewed to survive the long sea voyage from England to India, this style is where the preservative qualities of hops were put to the test. The beer arrived in India unspoiled and a new style was born. Today, IPAs are the most popular style of craft beer on the market. According to the Brewer’s Association, they accounted for 21 percent volume share of the craft sector in 2014, and 23 percent of the dollar share. One can go into any retail beer store, put on a blindfold, throw a dart in any direction, and land it squarely on the bottleneck of an IPA. This is truly a limelight moment for hops, with no sign of abatement on the horizon.

To learn more about hops, including their historical significance, their myriad styles, and importance in today’s beer world, visit brewersassociation.org, or pick up a copy of "Tasting Beer" by Randy Mosher, or the be-all and end-all of beer tomes, "The Oxford Companion to Beer," edited by Brooklyn Brewery’s brewmaster Garrett Oliver.