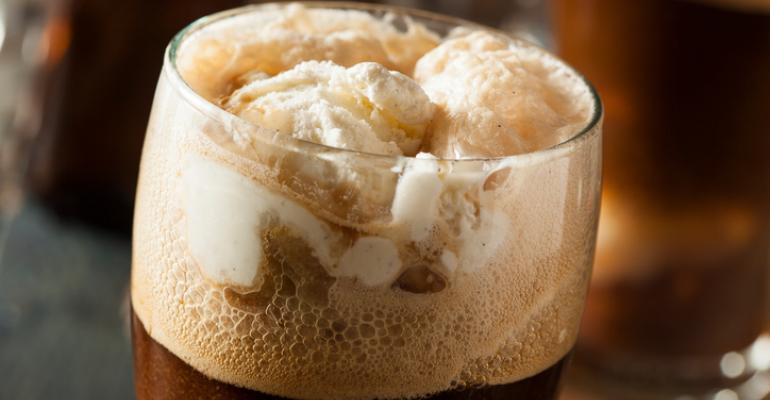 Baskin-Robbins, All About Beer suggest brews to drink with ice cream

Until recently, food and beverage pairings were almost always about selecting the best wine to go with a particular dish. Outside of fine dining, people didn’t give it much thought.

But as great food has spread to more casual restaurants, and as customers have become more sophisticated in their tastes, pairing has become more democratic, too, and beer has been brought into play.

Restaurant operators report that well thought out beverage pairings can boost sales, and creative ones, like Smashburger's pairings with local craft breweries, can also result in good press.

With Father’s Day — one of the year’s top days for beer sales, according to Nielsen data — approaching on June 19, Baskin-Robbins has teamed up with All About Beer Magazine to find good beer to go with its ice cream.

“At first glance, you might not think of pairing beer and ice cream together, but once people gave a chance to taste these combinations, they will see how well the different flavors complement one another,” All About Beer editor John Holl said in a press release.

Beer has a wide variety of flavors due to the interplay of its main ingredients of malt, hops and yeast. And brewers are increasingly creating complex flavors with the addition of ingredients such as coffee, fresh fruit and spices.

“Working with a variety of flavors, we looked to match complementary flavors and intensity, and coax out some nuances from both the beer and the ice cream,” Holl added.

Beer and ice cream pairings are unusual, but not unheard of. In fact, some restaurants periodically offer them as floats — usually a scoop of vanilla ice cream in a mug with stout or porter.

Here are the frozen dessert pairings from Baskin-Robbins and All About Beer:

• Mint Chocolate Chip with coffee porter or stout: The roast of the chocolate chips and the cool mint mixes nicely with the cocoa and coffee notes in those beers.

• Peanut Butter N’ Chocolate with doppelbock: This malt-forward, dark brown lager is enhanced by the chocolate base and nutty creaminess of the ice cream.

• Watermelon Splash Ice with gose: Gose is a sour beer brewed with wheat and salt that All About Beer predicts will be the beer of the summer, making it a good match with watermelon sorbet. The magazine recommends finding variations of gose flavored with cucumber or fruit such as prickly pear or watermelon.

• Rocky Road with foreign extra stout: This stout has flavors of sweet chocolate, espresso and red berry that “party hard” with the ice cream’s almond, marshmallow and deep chocolate, according to All About Beer, which recommends combining the two in a float.

• Pralines ’n’ Cream with a pilsner, mango ale or India pale ale: The sweet, cereal-like malt of pilsner — a variety that includes many mainstream American brands — takes the place, from a flavor perspective, of an ice cream cone. Additionally, the nuttiness and sweetness of the ice cream balances some of the more assertive flavors of IPAs. Additionally, All About Beer says mango-flavored pale ale is expected to be a popular beer this summer.

• Cherries Jubilee with barley wine: High alcohol, heady barley wine enhances the cherry and rum flavors of the ice cream, and the food and beverage combination result in bittersweet and leather flavors, “begging for this combo to be enjoyed in dad’s favorite leather chair.”

• Vanilla and peach lambic: Another Belgian style, this beer is fermented with peaches and aged in barrels, resulting in a slightly spicy and fruity character that “will act like a sauce for the ice cream.”

• Very Berry Strawberry and Hefeweizen: The banana esters found in this German wheat beer combine with strawberry to mimic America’s favorite smoothie flavor, or, as All About Beer suggests, the start of a fruit salad. Additionally, the sweet ice cream will help balance the spicy clove flavor of the beer and balance the acid of the lemon wedge often served as a garnish for wheat beer.

Canton, Mass.-based Baskin-Robbins, with 2,500 domestic locations, has also rolled out the Cold One Cake, an ice cream cake shaped like a beer mug.