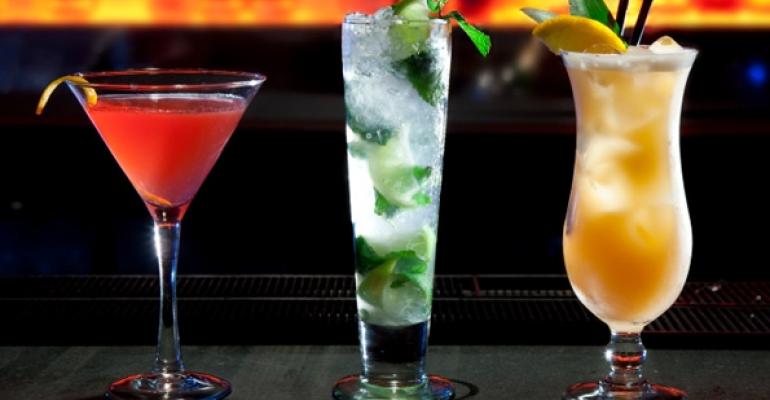 Mango margaritas, ginger Mojitos and similar cocktails with a flavor associated with them drove the growth in mixed drink sales in 2012, according to GuestMetrics LLC, a research firm that analyzes point-of-sale data.

In addition, mixed drinks overall grew by 1.9 percent during the year, according to the company, which analyzes data it collects from the POS systems of tens of thousands of chain and independent restaurants, as well as from suppliers.

RELATED
• Fresh juice boosts sales at Juice It Up!
• A look at libations in 2013
• More restaurant industry beverage trends

“In analyzing the nearly 2,000 unique cocktail types captured in our system and comparing sales for full year 2012 versus full year 2011, we see that cocktails grew nearly 2 percent," said Bill Pecoriello, chief executive of GuestMetrics, in a statement. "However, this growth was driven largely by cocktails that have a specific flavor associated with the drink.”

He said the data the company collected indicated that such flavored drinks made up about 26 percent of all cocktails sold, but they accounted for 51 percent of incremental growth in 2012 with a sales growth rate of 3.9 percent.

"This disparity in growth rates of flavored drinks over non-flavored drinks is also evident in the types of cocktails sold," GuestMetrics vice president of strategy and insights Peter Reidhead said. "The largest category share gains experienced by margaritas and Mojitos, while at the other end of the spectrum, we see that Cosmopolitans and martinis experienced the greatest share loss in 2012,”

The fastest growing drink flavors were mango, which grew by 35 percent, and tea, which increased by 30 percent. Ginger and melon flavors each grew by 15 percent and cucumber was in 10 percent more cocktails sold, according to GuestMetrics.

In general, flavor companies have pointed to tropical flavors as a likely driver of beverage sales, with mango, coconut, pineapple and guava named among the trendy flavors for the coming year.

In 2012, chains such as TGI Friday’s, Old Chicago and Rock Bottom Brewery added new margaritas and Mojitos to their beverage lineups.