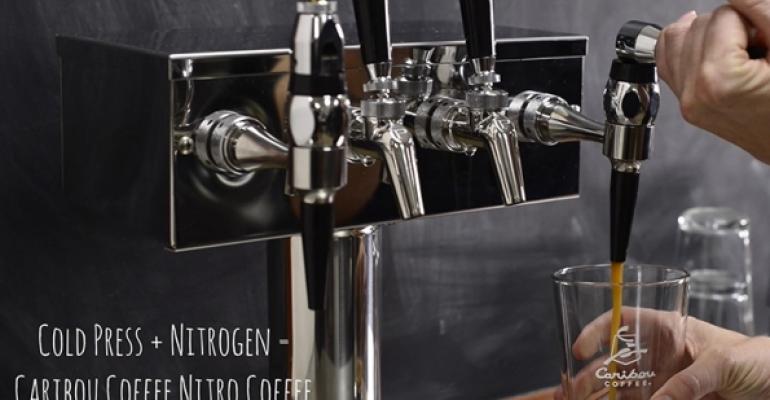 Caribou Coffee is dipping its toe in the latest trend — nitro coffee — by offering the beverage at two of its 615 locations.

The chain is introducing the coffee this month at the shop attached to its Minneapolis support center, as well as at a drive-thru location in nearby St. Louis Park, Minn., and plans to expand the test to 25 additional locations across the country in February, according to Andrew Kraus, Caribou Coffee Co. senior manager of food and beverage innovation and management.

Nitro coffee is made by infusing cold brew coffee, which Caribou has offered since the company launched in 1992, with nitrogen gas to give it tiny bubbles and a creamy mouth feel. Similar to carbonation, which uses carbon dioxide instead of nitrogen, the process is also what gives Guinness beer its distinctive texture.

“As it gets poured from the tap, you have that cascading, effervescent, bubbly look and feel to it,” he said. “The mouth feel, the creaminess — oftentimes for people who aren’t too familiar with it, they think there’s some form of dairy or creamer in there because it tastes so different from traditional [cold brew coffee].”

For customers drinking the coffee in-house, Caribou will serve the beverage in a pint glass, similar to one used for serving stout beer in bars.

Caribou is selling the Nitro Cold Press Coffee for $4.49 per 16-ounce glass, a significant upcharge from the $2.99 it charges at most of its 404 domestic locations for its regular cold brew. However, the price is in line with the upcharge for nitro coffee at independent coffee houses, Kraus said.

He added that Caribou Coffee is exploring the idea of tweaking the pricing based on customer response, or on introducing different pricing tiers in different markets.

Kraus said that many independent coffee houses make nitro coffee by connecting a keg of cold brew to a large tank of nitrogen, but he found the results of that process to be inconsistent. Instead, he is working with JoeTap, a company based in the Washington, D.C., area, which has patent-pending equipment that infuses the coffee with nitrogen at the tap. A chiller in the machine keeps the coffee at around 34 degrees Fahrenheit, and it will be served straight, not over ice.

Unlike Guinness, which requires a two-stage pouring process to allow the foam to settle, nitro coffee can be poured in one step, in about five to 10 seconds, Kraus said.

The test is in just two locations “to get a handle on the logistics/distribution side of it,” he said. If the expansion to 25 locations goes well, the coffee might then be rolled out systemwide.

He added that he was interested to see at which daypart the nitro coffee would be most popular. Although most traffic for coffee occurs in the morning, Kraus said nitro coffee “may be a different experience in terms of time of day and consumer usage.”