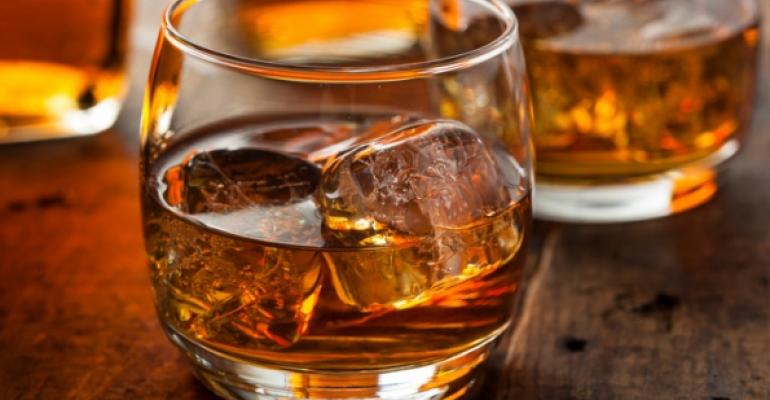 Bourbon, the distinctly American corn-based whiskey, is on the rise.

Through a combination of the growing craft spirits category, savvy marketing, the cocktail culture sweeping the nation’s nightlife scene, and a rise in interest from Millennials and women, bourbon is one of the fastest-growing categories in the beverage alcohol world.

According to the Distilled Spirits Council of the United States, bourbon and Tennessee whiskey exports topped $1 billion in 2015 for the third straight year.

By understanding the history of this truly American product, as well as ensuring that restaurant and bar staff are educated about bourbon’s production, operators can increase beverage sales through some simple marketing creativity. And by offering a robust list of brands, guests can also experience the myriad flavors that come from the simple interaction between alcohol, wood, time and tender-loving care.

There is much debate as to who the first bourbon distiller was, but we do know that it began being made sometime around the 1780s in Kentucky. Early tinkerers found that charring the wood of the barrels they aged the liquor in mellowed their fiery corn whiskey.

Over time, specific rules were set that define what actually makes bourbon bourbon. By law, it can only be produced in the United States, needs to be made with at least 51 percent corn, must be distilled at 160 proof or less, put into the barrel at 125 proof or less and contain no additives. Furthermore, the distillate must be aged in a charred new oak barrel.

Those are the broad parameters, and if you go another layer down, to call it a “straight bourbon,” you must age it for at least two years in a barrel. If you age it for less than four years, you have to put an age statement on the bottle. Additionally, and one of the factors that helped spawn a number of high-end offerings, single-barrel bourbons were introduced in 1984.

As with most whiskey in general, most bourbons are made by blending whiskeys of different ages to create a consistent blend. Single-barrel bourbons, on the other hand, are just what they sound like — bourbon poured straight into bottles from a single barrel, capturing the unique characteristics of each vessel.

In the past century, bourbon has ridden a roller coaster of popularity and unpopularity. During the World War II, many American distilleries were commandeered by the U.S. government and forced to produce industrial-grade alcohol for the military, essentially stopping an industry already ravaged by Prohibition. But as the post-war era unfolded, and with it a new age of prosperity, bourbon soon became the darling of the masses, with whiskey and soda becoming the nation’s preferred drink.

“The 1950s were the golden age of the Kentucky bourbon industry,” historian Michael R. Veach writes in his book Kentucky Bourbon Whiskey.

But that popularity would not last. Changing tastes in the 1960s and early ’70s hit bourbon hard, and “white spirits” such as vodka and unaged rum became popular. Whiskey came to be thought of as a bygone drink of the older generation. By the 1980s, the bourbon industry had seen such a slump that many large distilleries once thought untouchable closed their doors.

Fast forward to the 21st century. Bourbon’s compelling history, helped by clever marketers and small-scale craft distillers, has once again enraptured the tastes of Americans, as well as the rest of the world.

This explosion of interest means higher demand from consumers in the hospitality space and a need for education and creativity to ensure that you’re maximizing your profit from this white-hot category. Fine-dining operations, in particular, are seeing cult brands such as Pappy Van Winkle, which can sell for thousands of dollars a bottle, being asked for as a new generational status symbol. Move over First Growth Bordeaux, and make way for Kentucky gold.

Many people think bourbon must be created in the state of Kentucky, but that is a misconception, as it can be created anywhere in the U.S. However, Kentucky is the ancestral home of bourbon and, according to the Kentucky Distillers’ Association, the state produces more than 95 percent of the world’s bourbon, with over 5.3 million barrels maturing in Kentucky, which means the state has more barrels of bourbon than people.

The hospitality industry also has aided in the bourbon boom with an array of creative programs. Marriott Hotels, for instance, recently rolled out The Marriott Bourbon Program at more than 250 properties nationwide. This program trains bar staff on the history of the spirit and offers tips on storytelling to guests. It also offers signature cocktails and bourbon flights, and often hosts “Bourbon Battles” to test the skills of its mixologists versus local bartenders.

Guests at the Hyatt Regency in Lexington, Ky., can mix their own bourbon drinks as they are divided into teams and taken through a lesson on the history of bourbon. Then they’re trained on some basic principals of making drinks and are let loose with their creativity.

At fine-dining restaurants around the country, beverage managers are beefing up the number of brands they offer.

In Chattanooga, Tenn., sommelier Michelle Richards of St. John’s Restaurant offers 40 bourbons. She finds that most guests begin their meal in the bar area with bourbon, which gives her staff a chance to flex their hospitality muscles, as the patrons are often very engaged and eager to learn the stories behind the bottles.

In New York City, assistant general manager Fred Jones of Riverpark restaurant also has nearly 40 bourbons available. He finds that bourbon is not just for the cold winter months, and not just for before or after dinner; if his team uses seasonal ingredients in the creation of their bourbon cocktails, guests not only drink them year-round, but also throughout their meal.

Given the high profitability of cocktails, that gives bourbon great potential as a moneymaker for restaurants and bars.