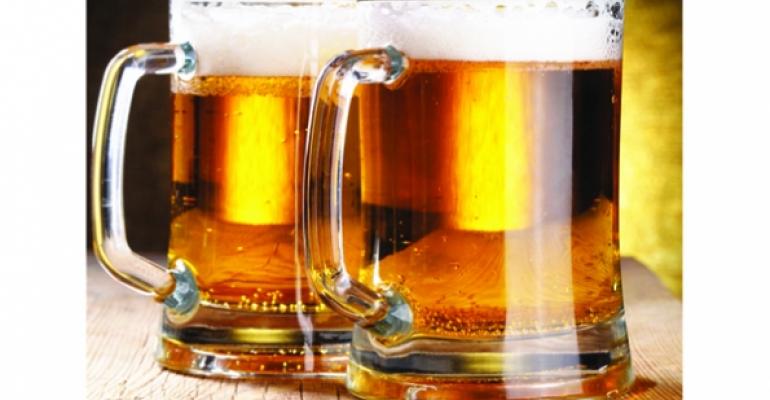 Stocking up on summer beers

David Flaherty is the Beer &amp; Spirits Director at Hearth Restaurant and the Terroir wine bars in New York. A freelance beverage writer, David is also a Cicerone Certified Beer Server, a wine geek, a seeker of fine spirits, a father and a fledgling homebrewer. He blogs at Grapes and Grains.

These days, when seasonality rules everything from the bar to the kitchen, your beer list must shift along with Mother Nature’s faces. Take a snapshot of your sales in December versus those in August, and you’ll have a crystal clear picture of the way guests’ cravings change as the seasons progress.

In light of this, I’ve asked four beer pros to tell us what’ll be in their glasses to beat the heat this year, and what they foresee as the most sessionable, most refreshing and most engaging beer styles for the summer of 2014.

First and foremost, get ready for the sour invasion. Some of the oldest styles of beer produced, the sour family is rooted in Belgian and German tradition. These beers clock in with low alcohol levels and considerable acidity, making them particularly food friendly.

Many U.S. craft breweries have recently jumped on the bandwagon and resurrected these styles.

"This is the summer that the sour beers are going to hit,” said Joshua M. Bernstein, author of “The Complete Beer Course.” “In particular, look for gose and Berliner weiss styles.

“On a hot day, you don’t want a heavy beer,” he added. “These are tart beers that won’t rip the enamel off your teeth. Berliner weiss, in particular, is the beer world equivalent of lemonade.”

“I love a gose. This is a beer for the dog days of summer when you want something thirst quenching and replenishing,” she said. “Its low alcohol level and signature tartness, combined with the slight notes of salt and coriander, make it perfect for long afternoons spent in the sunshine.”

Walk into any party filled with the proudly rotund bellies of beer geeks, and you’ll hear the word “session” bandied about. Simply meaning “drinkable,” this trend in the craft beer world embraces elegance and restraint — rather than the decades-old race to see who could go bigger. Brewers are dialing the alcohol needle down to allow drinkers to enjoy more beers, while still managing to keep their heads.

“The session brew style is the next big move in craft beer culture,” said Sid Mikhail, owner of the Best Damn Beer Shop in San Diego. “Sometimes I'm looking for flavor and less [alcohol by volume] so I can knock a few back without the bloated feeling. I enjoy good sessionable India pale ales and lower alcohol saisons that have a crisp, farmhouse taste.”

Meaning “season” in French, the “saison” style of beer is one of my personal favorites. In the days before refrigeration, Belgian farmers were forced to make most of their beer in the cooler months. But because the yeasts used in saisons can handle temperatures up to 80 degrees Fahrenheit, farmers began to brew well into the spring, storing their beer until the hot summer months. Many local herbs and spices, such as orange peel, coriander and ginger, were traditionally used, leaving modern brewers much room for interpretation and creative flair.

Many have eagerly embraced this style. Dan Bronson, a beverage consultant and manager at Crescent & Vine, a beer bar in Long Island City, N.Y., lists saison as one of his go-to styles.

“Saisons burst out of the glass with intense spice and fruit on the nose and, more often than not, end with a clean, dry finish, begging for the next sip,” he said. “Watch that alcohol level, though. Modern American iterations are breaking 7 percent, so try and seek out a ‘table’ or ‘petit’ strength version.”

On the other hand, look for the India pale ale category to start to move to the lower rungs of the boozy scale. After sending it to the heights of bitterness, American brewers are letting off the gas, with interesting results.

“In the evenings I want something a little more substantive, but still refreshing,” Kyle of Blind Tiger said. “The brewers add very little bittering hops in the boil, but huge hop additions later for a soft body and a very fragrant and flavorful taste.”

What beers do your customers like most during the summer months? Join the conversation in the comments below.

Another interesting trend that’s happening in the U.S. craft beer scene, in particular, is the resurgence of lager-style beers.

“The craft beer lagers being produced these days make you remember why pilsners [a type of lager] set the world on fire,” the author Bernstein said. “They have the holy trinity of low alcohol, refreshment and flavor, and are what you want to drink by the pool or after mowing the lawn.

“There is a stigma that lagers are boring, and they are anything but,” he added. “Craft brewing is coming full circle and revisiting styles they turned their back on 20 years ago.”

But don’t think the only beers your customers will enjoy in the summer are light in color, crystal clear and as drinkable as bubbly spring water. Crescent & Vine’s Bronson favors English bitters and porters, too.

“What, you stop eating chocolate or drinking coffee for the entire baseball season?” he said. “After months of crisp pilsners and citrus bonanzas, there's nothing better than a clean, roasty porter on a summer day.”

Don’t let your beer list go unchanged. You can do better by simply embracing seasonality. Pick up the phone, call your favorite beer representative, and ask her about some of these styles. She’ll have them, and she’ll be happy to sell them to you. It’s that easy. Let the summertime roll.