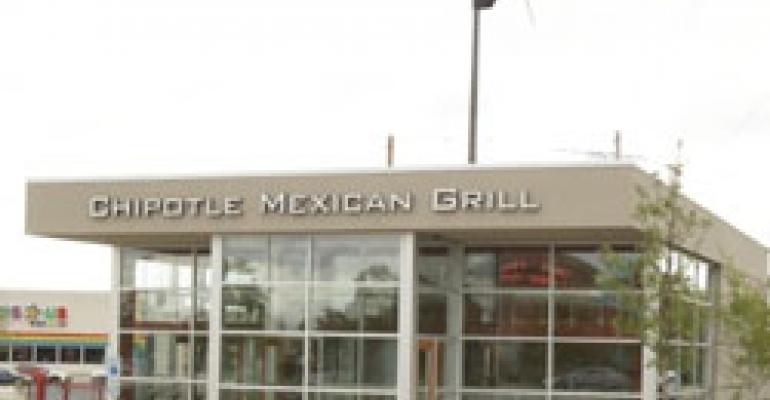 GURNEE Ill. Known for using organic or naturally raised ingredients, Chipotle Mexican Grill is turning its environmental focus to its buildings with the construction of its first partially wind-powered store.

Set to open here this fall, the freestanding restaurant features a 6-kilowatt wind turbine that is expected to generate 10 percent of the store's electrical needs, Chipotle said Wednesday.

The restaurant's design also calls for recycled drywall, recycled barn metal, and primers and paints that contain fewer chemicals, Chipotle said. The inside of the store will include a number of ecofriendly features, such as LED lighting, highly efficient faucets and toilets, and Energy Star-rated kitchen equipment.

In addition, a 2,500-gallon underground water cistern will collect rainwater for use in irrigating the landscape, which will include native plants that require less water and fertilizer. The parking lot asphalt will reflect the sun's heat, rather than absorb it, to make the entire site cooler, the company said.

Chipotle said it would seek Leadership in Energy and Environmental Design, or LEED, certification for the Gurnee restaurant from the U.S. Green Building Council.

The Denver-based burrito chain is a participant in the council’s retail pilot program and said it was seeking LEED for Retail certification for one of its restaurants in a shopping center in Minnetonka, Minn. That restaurant will include energy-efficient plumbing and lighting and other ecofriendly initiatives.