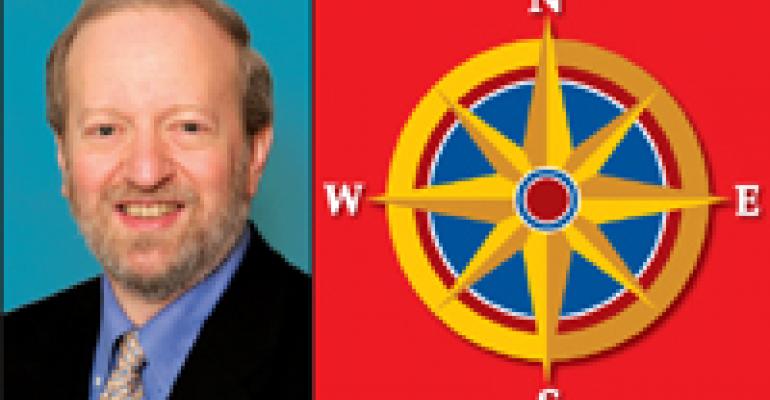 Can burgers get any bigger? Owners of new upmarket restaurants think so

This issue of Nation’s Restaurant News contains an illuminating fact. At the close of 2006, McDonald’s, Burger King and Wendy’s together operated nearly 27,000 individual outlets in the United States. Now, mind you, we’re talking about just three restaurant companies here. I can’t speak for anyone else, but it seems to me that there are a lot of places selling burgers today.

Logically, you might think that the American public would finally have enough hamburger restaurants from which to choose. Well, think again. Burgers apparently are hot once more—if, indeed, they ever actually cooled off.

The latest chapter in America’s burger love story is being written by operators opening a new generation of upmarket, ingredient-driven hamburger joints. Around New York we’ve seen BRGR, Burgers & Cupcakes and, well, Burger Joint debut over the past couple of years. Even Aquavit chef and co-owner Marcus Samuelsson plans to open an in-store burger concept for Macy’s this year.

Boston-area diners will get a taste of the trend this fall when the owners of The Metropolitan Club, a steakhouse in Chestnut Hill, open the Burger Bar in the Natick Collection, a luxury mall in suburban Natick, Mass. Not exactly a standalone brand—it’s housed in the mall’s new 250-seat Met Bar & Grill—the Burger Bar will offer diners a wide range of burger types and upscale toppings.

The centerpiece of the bar is a U-shaped, glass sushi-style counter that displays all ingredients in bento box-type containers. Customers will be able to sit at the counter and watch the chefs work.

The burgers themselves will be available in a variety of options, including an in-house grind made from four cuts of Prime beef, 100-percent ground Kobe beef, a housemade vegetable patty, lamb, pork and shrimp. Burgers will be prepared on a customized, gas-fired, vertical grill designed to shape and cook the 8-ounce burgers as the fat drips off. Diners will choose from a variety of buns and fine cheeses, while sauces like chipotle mayo and green-peppercorn ranch will be available along with ketchup. In addition to ingredients like roasted garlic and guacamole, the restaurant will also feature some decidedly high-end items like foie gras and truffle oil.

The concept, which Metropolitan Club’s executive chef Todd Winer still is developing, also will have a rotating menu of 50 to 60 signature burgers, themed for top international and U.S. cities. For example, Burger Bar’s culinary tourism features the Paris burger with fried egg, Brie and hollandaise, and the Barcelona burger with Serrano ham, manchego cheese, sun-dried tomatoes and olive tapenade.

Burger Bar’s standard burger, which comes with lettuce and tomato, will be priced at $7, and customers can add their choice of ingredients for 50 cents or $1 each, depending on the item. The check average is expected to run about $14 per person, making it more costly than those 27,000 other burger units—but likely as welcome.