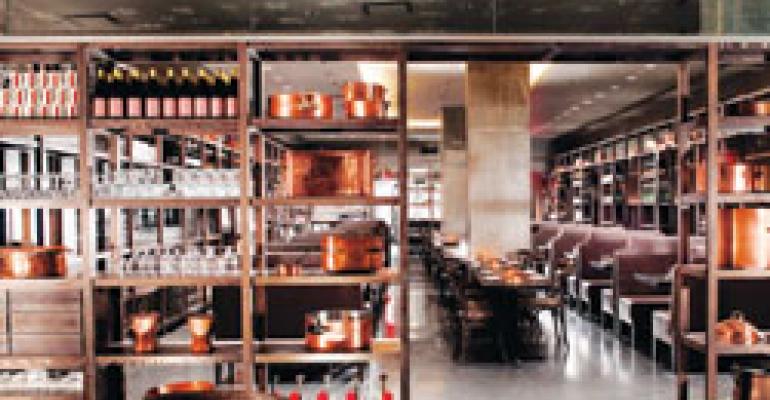 In a dollar-scarce economy, an operator might be tempted to cut corners on kitchen equipment. But not Daniel Boulud.

The superchef, who created the acclaimed French restaurant Daniel in New York City and gastronomic haunts of similar renown as far away as Beijing, has given his chefs hardware that’s more than adequate, if not extravagant, to tackle what may be his most daring concept yet, the casual new DBGB Kitchen and Bar on the Lower East Side of Manhattan.

Playing to big crowds since opening this spring, the 175-seat DBGB is a bold foray into the Bowery, once New York’s notorious skid row, but now a gentrifying area. In addition, it breaks new ground with an interior design that uses open shelving filled with supplies and cookware to create the feel of a restaurant supply store, a nod to the neighborhood’s heritage as a restaurant supply hub. What’s more, with a persona billed as “French brasserie meets American tavern,” it is Boulud’s plunge into simpler and less-costly fare than his customary sumptuous cuisine, namely artisanal sausages, gourmet burgers and boutique beers.

“With the neighborhood changing there, we felt it was an exciting opportunity for us,” Brett Traussi, operations director for the Dinex Group, Boulud’s management company, said explaining the move downtown. It’s the group’s fifth restaurant in New York and tenth overall, with single outlets in Palm Beach, Fla., Las Vegas and Bejing and two in Vancouver, Canada.

While it’s clear that DBGB signatures like the Boudin Basque, a spicy blood and pig’s head sausage priced at $14, and The Piggie, a beef burger topped with BBQ pulled pork and jalapeno mayonnaise priced at $19, are kinder to the wallet than Daniel’s $105 three-course prix-fixe menu, the new eatery is not simply a reaction to customer belt-tightening. Traussi said that Dinex had been planning a more casual place in the area some time before the economy soured.

“We had to take the economy into account in the last-minute details,” Traussi said. “But it wasn’t like having to change a super-gastronomic restaurant into a hamburger shack.”

Thus the DBGB kitchen is free of pricey frills like the showy cooking suite that produces Daniel’s haute cuisine. Instead, it has a utilitarian straight cooking line with a sturdy charbroiler and deep fryers to turn out its popular burgers and French fries. The 14 artisanal sausages are grilled, braised or cooked on a plancha, a griddle-like surface that sears multiple portions of food and recovers temperature quickly. For Boulud, who has consulted on plancha design with a manufacturer, it’s something of a pet item.

“Daniel is very passionate about his planchas,” Traussi said.

Rounding out the cooking battery are a French top, a salamander broiler, a six-burner range, convection ovens on the main cooking line and in the pastry area, and induction cooktops for light cooking in the pastry and garde manger areas. “Daniel gives his people everything they could possibly use to be successful,” said Philip Amico of Tassone Foodservice Equipment Co., who consulted on DBGB’s kitchen design.

In addition to convenient low-boy refrigeration at work stations, the kitchen has a walk-in with glass doors for storing oysters and other seafood for the plateau de fruits de mer, or shellfish platter. Multitiered ice bins keep the shellfish cold and in handy reach.

“It’s beautiful for the customer as well as very functional,” Traussi said. In addition to brand-new wares, Dinex installed a few pieces of lightly used equipment left from renovations of other company restaurants, such as a pot sink, ice chests and drain boards. It helped eliminate unnecessary costs without scrimping on quality.

“We want to give good value and not have customers paying back our financial deal on the menu,” Traussi said.

Fronting DBGB’s open kitchen is floor-to-ceiling open shelving that creates a partial separation from the dining room. In addition to storing supplies like olive oil, wine and china, it shows off an impressive collection of copper cookware donated by renowned chefs, such as Paul Bocuse and Alain Ducasse, underscoring the restaurant supply-store angle.

“The open shelving system exposes as much of the kitchen as possible to the front of the house while serving as auxiliary storage space,” said Thomas Schlesser, the restaurant’s designer. “It also makes the customer feel more a part of an active kitchen.”