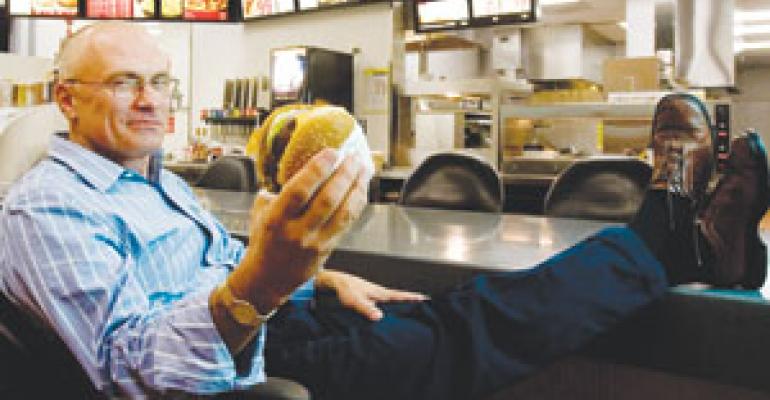 Most people have a “What have I gotten myself into?” moment at some point during their lifetimes.

For Andrew F. Puzder, odds are that moment came shortly after the former trial lawyer was appointed as president of Hardee’s in 2000, and it was magnified just three months later when he annexed the president and chief executive posts at parent CKE Restaurants Inc., which also housed the 1,000-plus-unit Carl’s Jr. brand.

The company’s stock, which at one time hovered at $42, was down to $2. CKE had amassed more than a half-billion dollars in debt, and its Hardee’s brand was arguably one of the worst-performing fast-food chains in the country, replete with dirty restaurants, a bloated menu and shopworn units in dire need of remodeling.

“The whole thing was strange,” says Puzder, who at the time was serving as the company’s executive vice president and general counsel. “I walked into the shareholders meeting that year and all the directors were standing—actually more like hiding—in a corner. When your company is losing money like it was then, you have a lot of irritated stockholders. They told me, ‘Andy, you’re now the president of Hardee’s.’ Three months later, [then-CKE chairman William Foley] said, ‘OK, you’re now president and CEO of the company.’ It was a lot to take in for somebody with pretty limited experience in restaurants. But after a few weeks it hit me that I could do this.”

Since assuming the reins at CKE, the 58-year-old Puzder has been the point man in one of the more notable turnarounds in foodservice annals.

From posting a near $200 million loss in fiscal 2001, CKE has rebounded to a point where it generated fiscal 2008 profits of $31 million on systemwide sales of $1.53 billion.

Hardee’s, whose average unit sales were slogging along at $716,000 at the time of Puzder’s appointment and about to plunge even further, are now roughly at $970,000. Carl’s Jr. unit volumes have risen from a pre-Puzder average of $1.02 million to the current level of $1.52 million, marking eight consecutive years of same-store sales increases.

“He united the company, brought in good people and basically changed the structure of the organization,” said Mike Murphy, CKE’s chief administrative officer and a friend of Puzder’s since they were law clerks in St. Louis in the late 1970s.

Puzder began the turnaround at the faltering Hardee’s with a sweeping revamp of customer service and cleanliness standards. He also sheared nearly 40 items off a menu that offered everything from signature made-from-scratch-biscuits to fried chicken and roast beef.

He visited hundreds of restaurants in the system, sampling items and gauging the opinions of employees and franchisees by asking them for an impromptu vision statement of where they saw the brand in the future.

Along the way, Puzder eschewed both convention and perhaps, as some nutritional detractors have charged, caution, with a no-apologies march toward capturing both the appetites and loyalties of the profitable 18-to-34-year-old male demographic and positioning both Carl’s Jr. and Hardee’s away from such larger kid-centric competitors as McDonald’s, Burger King and Wendy’s.

“McDonald’s spends $800 million a year on TV advertising and owns the kids segment,” Puzder says. “We couldn’t compete against that. We had to find a different way. So we went after what I like to call the ‘young hungry guys.’”

He infuriated the food police by rolling out a colossal half-pound Six Dollar Burger, which sold for $3.95, in both chains and an equally mammoth and calorie-laden Thick-burger line at Hardee’s.

“The only place I see where people are advocating calorie-counting and healthy menus is in the media,” Puzder says. “I have never seen it at the restaurant level.”

He had CKE’s ad agency, Mendelsohn Zien, reinforce the company’s customer-targeted sweet spot with creative efforts that included TV spots for the Six Dollar Burger featuring a suggestive Paris Hilton in an abbreviated swimsuit and another with Playboy founder Hugh Hefner.

“There are few turnarounds in the retail space, let alone restaurants, that approach the magnitude of what Andy’s done at CKE,” says Bora Sila, managing director of consumer mergers and acquisitions at Citigroup and a longtime advisor to Puzder.

For Puzder, the sojourn from deposing witnesses to reigning over a quick-service empire with more than 30,000 employees was roughly 20 years in the making.

The Ohio native found his legal calling early on, when at the age of 10 his mother told him he had a flair for arguing and predicted he’d make a good lawyer.

He eventually passed the bar, but not before performing in a few—literally—taking a career detour by playing in a rock band before eventually completing his undergraduate studies at Cleveland State.

He chose to attend law school at Washington University in St. Louis and settled in after graduation first with veteran criminal lawyer Morris Shenker and then with the Stolar Partnership, where, in the mid-1980s, he met Carl’s Jr. founder Carl Karcher, whom he spent three years helping extricate from a lawsuit over a bad investment.

Soon he became Karcher’s personal attorney, only to discover that his client’s personal finances were in equal disarray.

“Over the years Carl became like a second father to me and was a great mentor,” Puzder says. “But sometimes he didn’t realize that not everyone was as honorable in business as he was.”

Realizing that he needed Puzder’s legal skills on a full-time basis, Karcher, who died in January at the age of 90, summoned him to Southern California, where he joined the Orange County firm of Stradling, Yocca, Carlson & Rauth.

Puzder subsequently became in-house counsel for title insurer Fidelity National Financial and worked with its chairman, William Foley, to create the Santa Barbara Restaurant Group, a portfolio of both quick-service and sit-down restaurant brands that included Green Burrito. The company was eventually purchased a decade later by CKE.

Meanwhile, CKE’s management had been scarred by years of intramural battles between the board members and Karcher over strategic direction. Compounding the personnel skirmishes was the harsh reality that Carl’s Jr. was losing the fast-food pricing wars and resource-heavy giants like McDonald’s and Burger King were muscling in on its territories to such an extent that in 1993, the company posted its first loss in seven years.

A year later Karcher was abruptly voted out as chairman of the company he had founded more than 50 years before.

A bailout by Foley and Fidelity National in exchange for 3.8 million shares of the company helped Karcher regain his title and won Foley a board seat. Foley eventually ascended to the chairman’s post, and Puzder was installed as executive vice president and general counsel and was charged with overseeing franchising.

In 1997, Foley negotiated a deal to acquire then-3,100-unit Hardee’s from Canadian conglomerate Imasco Ltd. A subsequent purchase of 550 additional Hardee’s from Denny’s then-parent Flagstar, however, saddled the company with debt of some $630 million.

“It was more than too much debt; there was an underlying question of Hardee’s viability and massive integration issues,” says Citigroup’s Sila. “Hardee’s had a great breakfast and terrible everything else. Its franchisees were getting routinely poached by other quick-service chains. Carl’s Jr. was performing OK, but Hardee’s was dragging everything down.”

“Hardee’s had brand equity, but it also still had the fundamental operations problems only with a different name on the door,” Murphy says. “The problems didn’t go away simply because it had a new sign.”

“When [Puzder] took over he was faced with much deeper issues than just competitive,” says consultant Dennis Lombardi of Columbus, Ohio-based WD Partners. “He clearly has lent stability to an organization that needed it at the time. The Six Dollar Burger not only signaled a change for the brand but for the entire segment. For that alone he deserves big points.”

“The big problem for Hardee’s was that it had been going downhill for 10 years,” Puzder says. “They had a parent that didn’t invest in them. Employees had food on their shirts and seemed always to be cleaning windows. My thought was customers could now look through the windows and see how dirty the units were. It was not a great recipe for success. The chain had actually declined to the point where they were willing to let me do anything.”

Hardee’s had also gone through 10 ad agencies in 11 years before Puzder gave the account to Mendelsohn Zien.

“[Jordin Mendelsohn, creative director at the agency] said, ‘Andy, we’re going to tear down the restaurants, get rid of breakfast and serve large burgers,’” Puzder says. “I said, ‘Jordin, I really don’t like the first two ideas but the third one sounds good.’”

In addition to the upgrades at the unit level, he also began a refranchising program to pare down the company’s massive debt load. He rolled up his sleeves and began working shifts at various units.

“The first was that there were to be no more people behind the counter who didn’t have all their teeth,” he says. “The second was that the next person who tells me, ‘We’ve always done it that way,’ will be fired.”

Going forward, Puzder said the company would continue its international push targeting Australia, Canada, Europe, Japan and Latin American with a goal of 600 international stores by 2014 as well as its aggressive unit remodel schedule.

“Looking back, there were some people that I probably stuck with too long and maybe should have made some changes earlier than I did,” he says. “But you need to hire very good people and let them do their jobs and realize they’re not always going to do it perfectly. But overall, I have no regrets. It’s been a great ride, and I’m nowhere near ready to go. I’m here for as long as they’ll have me.”