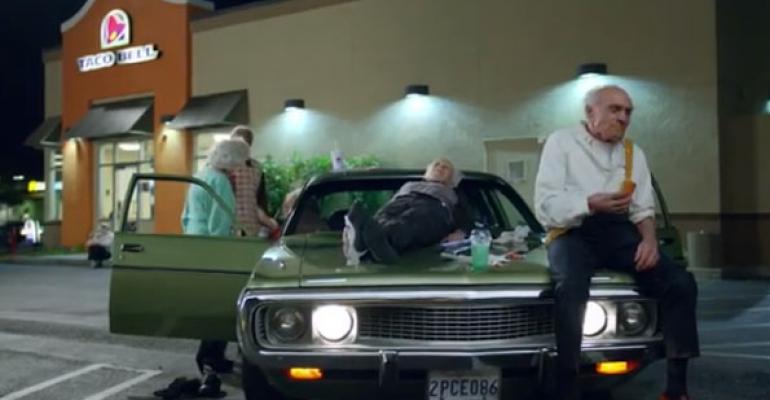 The restaurant brands are going beyond commercials with promotions before, during and after the big game

The Super Bowl has never gone into overtime, but advertisers Pizza Hut and Taco Bell are planning to extend their Super Bowl marketing beyond game day ads with digital promotions and systemwide giveaways after the final gun sounds on the National Football League’s Feb. 3 championship game.

The two chains, both owned by Louisville, Ky.-based Yum! Brands Inc., have pregame commercials planned to introduce new products, including a Cantina Bell Steak Burrito at Taco Bell and an unnamed “next big innovation” that Pizza Hut teased in a recent press release.

They also have in-game commercials planned, including a user-generated spot from Pizza Hut that includes fan-submitted video of customers doing their impression of a quarterback yelling a typical pre-snap, “Hut. Hut. Hut!”

Marketing officials for the two chains said spreading out their promotional efforts before, during and after the Super Bowl would leverage more marketing effectiveness than they would have achieved with just a game-day ad buy alone.

Brian Niccol, Taco Bell’s chief marketing and innovation officer, said in an email to Nation’s Restaurant News that the Irvine, Calif.-based chain wanted to engage its fans not only on Super Bowl Sunday with its commercials but also before and after the game.

Last week, Taco Bell released a “teaser” video for its Super Bowl commercial on its YouTube channel. The video introduces its senior-citizen character, Mr. Goldblatt, who in the in-game commercial will lead his friends to escape their nursing home for one night to party like a group of Taco Bell’s core Millennial customers.

Taco Bell released the full “Viva Young” spot online this week. Their night of carousing is set to a Spanish-language version of “We Are Young,” the hit song from Grammy-nominated band Fun.

“We want to build excitement and anticipation for our Super Bowl spot, and we’ve started by sharing our ‘Grandpa Goes Wild’ teaser among our 150,000 team members and our loyal followers in social-media channels before sharing with the media,” Niccol said. “So far, nearly a half million people have watched the teaser, and we’re getting great feedback on it.”

Taco Bell released the full 60-second version of “Viva Young” online to build a following with the same base of employees, franchisees and hard-core fans.

Sharing the Super Bowl ad before Sunday should not deflate the ad’s impact when it plays during the game’s second quarter, Niccol said. “By engaging with and rewarding our employees, franchisees and fans first, we’re providing them with the chance to build their social currency by being in the know and sharing the teaser and ad with their friends,” he said. “We will continue to engage with consumers across our own social channels, as well as paid online-search campaigns.”

The chain is counting on the same audience to drive awareness and traffic for Taco Bell’s “Live Más Monday,” in which a free churro will be given away with any purchase during regular store hours at all 6,000-plus locations in the United States. A tag at the end of the Super Bowl commercial will point viewers to Taco Bell’s Facebook page, where details on how to participate in “Live Más Monday” will be shared.

“The strategy behind our Super Bowl campaign is to extend that moment in time by engaging with fans early on, during the big game and the day afterward,” Niccol said. “We are always looking for ways to encourage our community to ‘live más’ and thank our consumers for being so loyal, and we thought giving something back to them was a great way to do just that.”

Pizza Hut chief marketing officer Kurt Kane said in the Dallas-based chain’s press release that the brand of more than 10,000 restaurant in 90 countries would offer any customer a free sample of its “next big innovation” on Tuesday, Feb. 5, between 4 p.m. and 7 p.m.

The giveaway will result from a “big, easy” promotion that depends only on the word “hut” being said on the field at the Superdome in New Orleans during the Super Bowl broadcast, Pizza Hut said. Because “hut” is one of the most commonly said words during a football game — Pizza Hut cited a study from Stats Inc. that said the word is uttered about 90 times during a typical contest — the chain is sure to execute its giveaway.

“Anyone can give away a pizza, but not just anyone can offer up a new product that’s a true category breakthrough," Kane said. "We are the recognized leaders in innovation, and this product is definitely going to be a crowd pleaser.”

The stipulation that fans would be rewarded only if somebody says “hut” on the field could be a thinly-veiled jab at rival Papa John’s Pizza, the official restaurant sponsor of the NFL and the Super Bowl. The past three years, Papa John’s has given away free pizzas under conditions like the Super Bowl going into overtime, the pregame coin toss coming up “heads,” and, this year, if a fan correctly guesses the coin toss in an online vote.

Pizza Hut’s next product to be given away will be revealed in its separate commercial scheduled to air during CBS’ pregame show.

“This giveaway will be one of the largest in Pizza Hut history,” Kane said. “It’s our ‘thank you’ to our customers who always make the right ‘Hut’ call on game day and every day, because anything less than great just doesn’t cut it.”