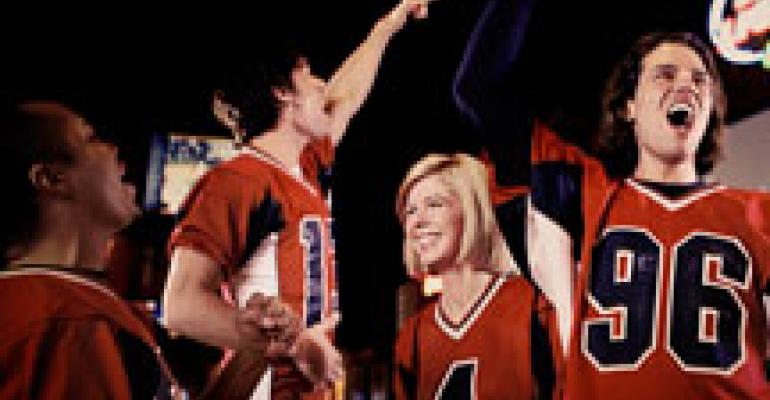 Super Bowl Sunday historically ranks as one of the biggest days of the year for marketers, especially restaurant chains looking for the game’s giant TV audience and for a big haul in catering or takeout sales. The crucial difference in 2011, however, is that no restaurants are going to run commercials during Super Bowl XLV.

Brands that advertised during last year’s Super Bowl — Papa John’s, Denny’s and Taco Bell — are passing on the $3 million price tag for a 30-second spot during this year’s game. Late last year, Pizza Hut said it planned to run its first-ever in-game Super Bowl commercial in 2011, but then changed its mind and sold its airtime back to the Fox network, electing to advertise during the pregame.

Even though restaurant companies have foregone Super Bowl commercials this year, they still are looking to market their brands as a destination for the big game.

Papa John’s Pizza, an official sponsor of the National Football League and the Super Bowl, is running commercials before the game kicks off starring Papa John’s founder, John Schnatter. In addition to those ads, the chain is offering free pizza to members of its Papa Points online loyalty program if the game between the Pittsburgh Steelers and Green Bay Packers goes into overtime. The brand also will give away a $45 gift card every 45 seconds.

Papa John’s spent the $3 million for a Super Bowl commercial last year to introduce its “Papa’s in the House” ad campaign. But chief marketing officer Andrew Varga said this year that the chain did not have a similar, long-term reason to make such a large marketing investment.

“Football season really is a six- to seven-month program for us, and the Super Bowl is the culmination of that,” Weitzel said. “We try to allocate our dollars throughout that season, realizing that football is such a significant piece of our business. We want to make sure we’re getting people in here throughout and not just on one day.”

However, Weitzel said luring customers to the brand’s 739 casual-dining restaurants with TV and radio commercials’ “You have to be here” tagline throughout the college and professional football seasons is only one part of the program. Preparing managers and staffers for the highest-volume days of the year, especially Super Bowl Sunday, is crucial.

“The biggest thing is making sure we’re prepared on delivering our unique experience,” he said. “We realize customers have other options and that we’re competing with Super Bowl parties at home, so we want to make sure we’re providing them with the ultimate experience on Sunday.”

Promotions vary from restaurant to restaurant for Buffalo Wild Wings, but many units are hosting VIP parties and offering “best seat in the house” prizes. The brand will host a “Wing Wars” promotion at its restaurants in Pittsburgh and Green Bay to see which market will consume more wings on Sunday, with the losing city’s mayor paying for a party platter to be delivered to the winning city’s mayor next week.

Company-owned locations made significant upgrades to their audio-visual packages to draw more people in for wall-to-wall viewing. Weitzel said Buffalo Wild Wings grew its share of sales from dine-in to 55 percent in last year’s Super Bowl, from 53 percent during 2009’s big game. Catering and takeout account for the rest, he said, and wings make up 70 percent of sales on that day.

Other, smaller chains will attempt to capitalize on Super Bowl Sunday’s parties and celebrations, and for concepts without a big-game dine-in atmosphere or go-to sports foods like wings or pizza, social media can be a cost-effective way to level the playing field.

Fred Kirvan, president of nine-unit fast-casual chain Desert Moon Fresh Mexican Grill, for example, said he has been using Facebook and Twitter aggressively to market his brand for the past year and a half, and “the Super Bowl is an even better opportunity to do that.”

“Everybody is interacting so much [via social media] during any major sporting event, and we’re going to be more vocal than usual,” Kirvan said. “We want that catering business and to sell pints of guacamole. First thing on Sunday morning, we’ll be promoting ourselves as a one-stop shop for catering, and we’ll offer a free pint of guacamole for anybody coming in during Super Bowl Sunday.”

The Rumson, N.J.-based chain said promoting itself on Sunday wouldn’t require any incremental marketing spending beyond the monthly fee it pays its marketing firm to manage its social-media profiles.

“It’s low-hanging fruit; we just have to go out and get it,” Kirvan said, which, he adds, is good because “the cost of a 30-second Super Bowl ad equals about 30 years of our marketing budget.”