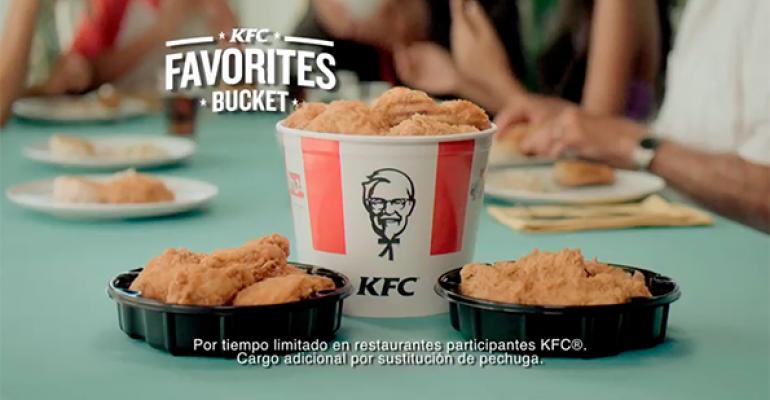 KFC has launched a new campaign to appeal to the growing Hispanic market with an ad spot that represents how families, and the Hispanic community as a whole, can be united at the dinner table.

The campaign, titled “Together,” includes a television spot that portrays a nine-person, multicultural Hispanic family, sharing a KFC Favorites Bucket of fried chicken, as well as the meal’s accompanying chicken tenders and hot wings. The ad begins with a shot of what appears to be a modern nuclear family, then pans to reveal the diverse, multigenerational group sharing the meal, including a young teen in an outfit reminiscent of a Quinceañera, a female mariachi singer, and an older man in a guayabera shirt, among others.

“Gathering together with family is at the heart of the Hispanic culture,” Rodrigo Coronel, spokesman for the Louisville, Ky.-based chain said. “KFC wanted to show how the different choices of a Favorites Bucket brings together a diverse Hispanic community, and everyone can meet at the table and enjoy the meal. ”

The campaign was created by agency of record Creative Alliance of Louisville, Ky.

The Hispanic community is one of the nation’s fastest-growing consumer segments. The group’s buying power is expected to reach $1.5 trillion next year, and the Hispanic population expected to represent 19 percent of the total U.S. population by 2020, according to New York City-based statistics firm Statista.

“The Hispanic market is very important to the brand, and it continues to grow and become stronger,” said Dan Franklin, chief creative officer for Creative Alliance, which created the ad.

KFC’s Coronel added that the brand was mindful to reflect the differences within the diverse Hispanic customer base.

“So many brands are generic, or deliver ‘one-size-fits-all’ solutions,” Coronel said. “We are very aware of how rich the Latino community is, as well as the differences among Hispanic cultures,” he added. “We all speak the same language, but it was important for us to create a message that would show the essence of the different countries we represent, yet still transcend the Latino culture, regardless of the customer’s age or origin.”

The television spot debuted Sept. 29 and is currently airing on about 10 television networks, including Telemundo, Univision and TV Azteca. It will run until November 9.

Creative Alliance and KFC are currently working on the next campaign, which will promote KFC as a meal option for families during the holidays.

KFC, a division of Yum! Brands Inc., operates more than 18,000 locations in more than 115 countries.