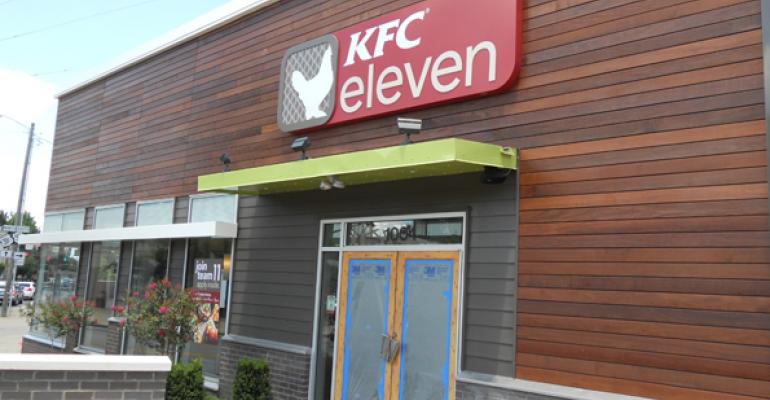 KFC previewed a prototype of its new concept, KFC eleven, Thursday in the Highlands neighborhood of Louisville, Ky., unveiling a fast-casual format with a menu built around its boneless chicken.

The design of the new concept features photography and sculptures from local artists within the Highlands area. KFC selected the neighborhood for its younger, hipper enclave that is supportive of Louisville’s arts scene, brand officials said.

A look inside KFC's fast-casual prototype

Behind the scenes at the first KFC eleven unit

“We took a look at the marketplace, at KFC and at evolving consumer needs, and what we wanted to do was design a new concept that could enable us to meet those changing consumer needs,” David Menis, senior manager of concept development for Louisville-based KFC, said from a table at KFC eleven. “We looked at menu, service, technology, the asset and everything, and asked … how could we leverage the strength of KFC and the taste of our chicken to put together a package that’s compelling for consumers.”

KFC eleven’s menu features items, formats and price points that skew decidedly more toward the fast-casual end than the quick-service end. Customers choose grilled or crispy chicken to be added to four varieties of sandwich, four types of rice bowl, and six flavors of salads or flatbreads. Prices range from $4.99 for the Original 11 sandwich to $6.89 for any flatbread or salad.

Guests can also order bundled meals of crispy bites or pieces of Original Recipe Boneless chicken and one of five sides: waffle fries, macaroni and cheese, garlic smashed potatoes and gravy, crunchy coleslaw, or a side salad. Beverages include “lightly frozen” lemonades and smoothies, as well as iced drinks such as the Salted Caramel Freeze or the Cookies & Cream Freeze.

Menis stressed that the flavor of KFC’s Original Recipe is consistent throughout KFC eleven.

KFC has yet to determine the growth trajectory of KFC eleven, either as a standalone brand for new builds or as a prototype for remodeling the chain’s current system of 4,500 locations in the United States.

“Right now we’re really solely focused on making this restaurant as great as it can be,” Menis said. “We certainly expect aspects of this restaurant will come to influence the future development of KFC … but in terms of future expansion of this as a concept, we don’t have any plans for that at present.”

Much of the menu depends on Original Recipe Boneless, which KFC launched this spring as an alternative to its traditional bone-in fried chicken.

“Although the development of Original Recipe Boneless and of KFC eleven were sort of parallel paths, they were both feeding off each other significantly,” Menis said. “Certainly what we expect from this ‘innovation restaurant’ is to be able to better understand boneless chicken and what consumers are looking for out of that, and then transition those learnings back to our 4,500 restaurants.”

He added that KFC eleven is also a test site for mobile payments with the Square platform, which may be adopted at traditional KFCs if successful at the KFC eleven prototype.

“Across the board, be it from our people strategy, menu, the asset design or the service style, we expect that any of those areas — and probably some we haven’t yet identified — will provide us with learnings that can help us make the KFC brand even stronger,” Menis said.

KFC is a division of Louisville, Ky.-based Yum! Brands Inc., which is also the parent of Pizza Hut and Taco Bell and operates or franchises more than 39,000 restaurants in more than 120 countries.