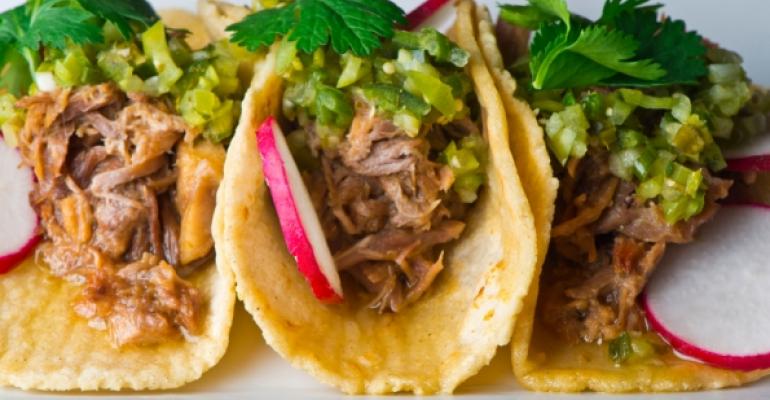 While Latin flavors have been finding a place on American menus for some time, never before has there been such a proliferation of Hispanic influences in dishes across all American restaurant segments, including quick service, fast casual and casual dining.

Iconic brands ranging from Denny’s to Red Lobster are utilizing ingredients such as salsas, pico de gallo, serrano and habanero chiles, and tomatillo sauces to add pizzazz to the menu while simultaneously catering to an exploding Hispanic population base.

“A great example is the long-running Chicken-Tequila Fettuccine with jalapeño-lime sauce at California Pizza Kitchen, which has been a pioneer in these kinds of ethnic mash-ups,” says menu trends expert Nancy Kruse, president of The Kruse Company.

“I think these are all great examples of the extent to which Latin flavors have crossed over to the mass market and become a standard part of the culinary repertoire,” she says.

The robust taste profile of many Hispanic dishes also lends itself to the inclusion of highly flavored non-Latino ingredients like TABASCO® brand products.

“U.S. patrons continue to show a very strong interest in both Central and South American cuisines, driven largely by the comfort and popularity of Mexican food,” she says.

“We’re seeing both ingredients and formats proliferate throughout American menus used both authentically and as an inspiration for innovation,” Webster adds.

From 2013 to 2014 chimichurri found its way onto 23 percent more menus according to Datassential. During that same period, Cubano mentions saw a 29-percent hike while the Spanish cheese Manchego was included on 13 percent more menus in non-ethnic restaurants. Other terms that are becoming more widespread include chipotle, chorizo, empanada, queso, and ceviche.

Research firm Technomic’s MenuMonitor reports the top Latin ingredients found on menus are cilantro at 8 percent, salsa at 7 percent and mango at 6 percent.

“Carnitas have also been a buzzword as of late, especially with the news of Chipotle returning them to menus,” says Lizzy Freier, editor, menu analysis at Technomic Inc. “Bennigan’s unveiled a Knife & Fork Carnitas Sandwich and Cadillac Ranch All American Bar & Grill launched Carnitas Chicharrones.”

Latin cocktails and other Hispanic-inspired menu items also are becoming more commonplace, according to Freier.

“Sandwiches seem to be an easy way to introduce American diners to Hispanic and Latin foods and flavors,” Miller says. “Two examples of this that are appearing more often on menus are the Mexican torta with the black bean spread and the Cuban sandwich.”

“The key to success in this area is to present the exotic in a familiar way, and what’s more familiar to Americans than a sandwich?” she says.

“We are taking a page from traditional Latin cooking and fortifying some of our dishes with typical items that are used in Latino cooking such as chilis, lime, avocados, and corn,” says Jesse Gideon, chief operating officer and corporate chef.

“We do it because we are eternally searching for bright flavors — flavors with a bang. Silky avocados give you a satisfied feeling from the fat and creamy texture,” he says.

At UFood Grill, a Boston-based fast-casual chain with a healthy bent, head chef Keith Seeber draws inspiration from Latin American/Hispanic food culture. “I grew up cooking with my friend’s mom who is Mexican. She basically inspired me to cook and become a chef.”

UFood menus a Carne Asada Ubowl, which features corn, black beans and a chipotle sauce on top of a base of cooked grain and steak. “Our Carne Asada bowl regularly is the best seller in the category since its inception this year,” says Seeber. “It was originally an LTO item, but due to its success, it has been a permanent addition. Customers also love our Huevos Rancheros breakfast burrito, which sells quite well.”

Other Hispanic-inspired dishes in the UFood pipeline include a Mexican torta-inspired Panini, with smoked chicken tinga, queso fresco and a roja molcajete salsa; a spicy tomato and corn soup; and a turkey chorizo burger, a pork-free twist on traditional chorizo.

Bubbakoo’s Burritos, an eight-unit fast-casual chain based in Wall, N.J., also embraces Latin menu influences. “We have really run with the quesadilla as a menu item and had fun with it. Consequently, they are probably our second best-selling menu item,” says founder and co-owner Paul Altero.

“We have our extremely popular Crispy Buffalo Chicken Quesadilla, Steak and Shrimp Quesadilla and an awesome Fried Jalapeño Quesadilla geared for vegetarians. We still have the standard cheese, chicken and pork quesadillas, but we really try to have fun with the menu.” The chain also recently rolled out a Ghost Pepper Shredded Chicken Burrito and Sriracha Carnitas.

“I don’t feel it’s a trend — it’s too familiar now,” Hart says. “The millennials are growing up and raising their families on burritos and tacos like we were raised on hamburgers and pizza because that’s what our parents thought was delicious, hip, cool and innovative.”