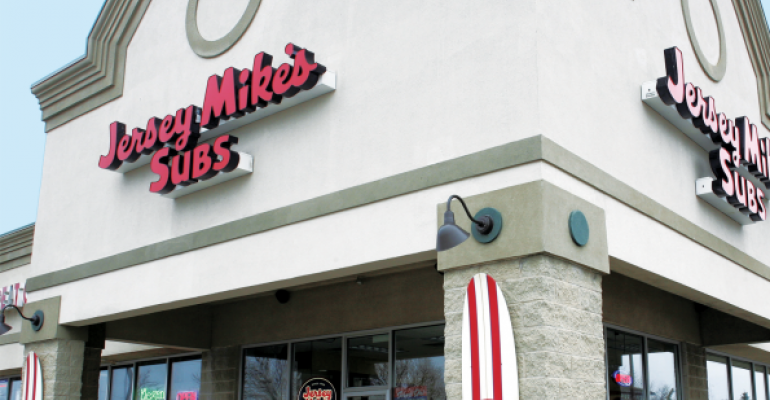 Jersey Mike’s Subs has grown rapidly in recent years, from 713 units at the end of 2013 to 1,046 at the end of 2015. With sales of $675 million in the Latest Year, a 28.6-percent increase from the Preceding Year, Jersey Mike’s jumped from the 83rd largest chain in the Top 100 to the 71st largest in terms of annual domestic sales, making it the fastest-growing chain both in terms of sales and unit growth.

Executives from the LSR/Sandwich chain, based in Manasquan, N.J., said Jersey Mike’s accomplished that growth by promoting the high quality of its ingredients in its “Sub Above” advertising campaign, as well as by adding three members to its real estate development team that helped the chain and its franchisees open a net 189 units in 2015.

Additionally, Jersey Mike’s conducted some 300 training sessions over the course of the year to help improve throughput at restaurants. Team members are encouraged to be friendly and conversational, but also to keep the line moving.

Community involvement is a cornerstone of Jersey Mike’s image, culminating in the last Wednesday of March — its “month of giving,” — when 100 percent of the day’s sales go to charity. 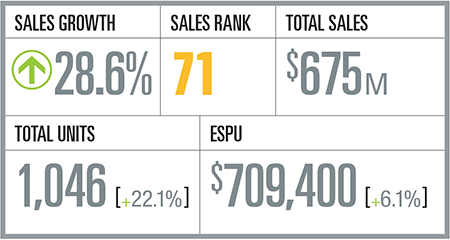 Consistent leadership. Peter Cancro, founder and CEO of Jersey Mike’s Franchise Systems Inc., got his start at the original Mike’s Subs in Point Pleasant, N.J., in 1971. In 1975, when Cancro was 17 years old, he bought the restaurant from its founder, and has grown the chain ever since. His second in command, president and Domino’s Pizza veteran Hoyt Jones, has been at Jersey Mike’s since 2007.

Corporate culture. Hospitality and speed are the foundations of Jersey Mike’s service, quality ingredients are the focus of its brand messaging, and giving back is an important part of the culture at restaurants and at corporate headquarters. In fact, Cancro has decided to build more company-owned restaurants so he can give equity in those units to the 75 staff members who work at the headquarters.

Managed growth. Jersey Mike’s is on a steep growth trajectory, but Cancro didn’t sell his first two franchises until 1987, 12 years after he bought the first restaurant. Ten years later, the chain still had fewer than 100 units, and didn’t reach that milestone until 1998.

Focus on quality. New menu items and promotions are rare at Jersey Mike’s. Instead, the chain stresses consistency, quality and efficiency.