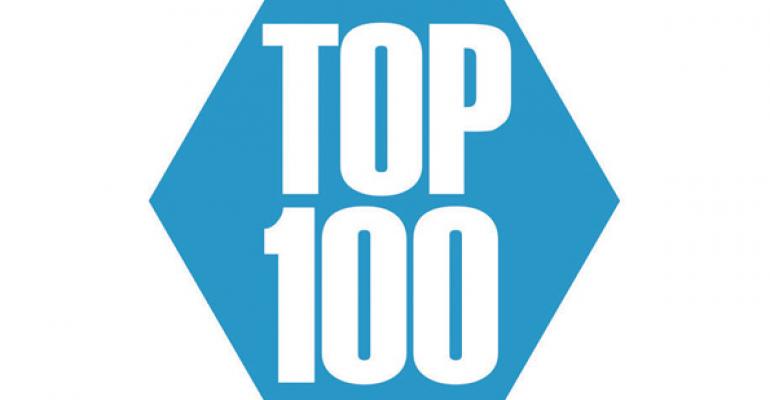 The Nation’s Restaurant News annual Top 100 report is the first installment of a comprehensive series of reports generated through exclusive research by NRN editors.

The Top 100 and the upcoming Second 100 and The Next 20 reports provide a detailed, brand-by-brand assessment and three-year performance comparison of the largest organizations in foodservice.

The census is NRN’s annual endeavor to compile and rank results of the industry’s cash-cow brands and corporations. This year’s reports give readers a panoramic view of the market share battles for the dining budgets of America’s consumers.

The Second 100 report, with data for chains and companies ranked Nos. 101-200, will be released in the July 28 issue of NRN, and The Next 20 with data covering emerging chains, will debut in the Aug. 25 issue.

More focused than other rankings of the industry’s largest organizations, NRN’s Top 100 seeks to present relevant comparisons of the largest foodservice competitors by tracking only consumer foodservice sales and revenue generated in the United States. Parallels therefore exist between the federal government’s shift in emphasis from gross national product, which included overseas results of U.S.-based multinationals, to the gross domestic product standard for
assessing today’s economy.

In addition to excluding foreign results, the series of reports factor out business activities not directly related to consumer foodservice. For example, McDonald’s Corp.’s estimated $1 billion-plus in annual revenue derived from franchisees’ rent payments, contract foodservice revenue from facilities maintenance, and sales of equipment or food items to their own franchisees are not included.

As the basic criterion for inclusion in the statistical universe, the study first ranks individually branded chains on the basis of domestic systemwide sales for their most recent fiscal years ended closest to Dec. 31, 2013.

Separately, companies are ranked on the basis of their domestic foodservice revenue. Qualifying organizations then also are assessed over a three-year span on the basis of their sales and revenue growth rates, estimated annual average sales per location, growth in average sales per location, and rates of expansion in total outlets and franchised units.

Chain: The brand name of the restaurants, retail stores
or other entities in a multiunit organization, as identified by
signage, logos or trademarks.

Concept: The type of restaurant or foodservice operation run by the chain, as defined generically by its food type, service style, retail context or operating format. Most concepts are self-defining and categorized by Top 100 traditional categorical parameters. Full-service concepts are distinguished from one another by dissimilar price-point ranges and whether full bar service is included in operations, as in casual-dining restaurants.

Latest-Year rank: The Top 100 chains and Top 100 companies are ranked in descending order on the basis of actual, estimated or projected systemwide food and beverage sales for the organizations’ latest fiscal years, generally the year ended or ending nearest Dec. 31, 2013. Data are limited to the chains’ systemwide food and beverage sales in the United States only; company data are limited to domestically generated revenue derived from foodservice only. Ties are assigned the same rank.

Preceding-Year rank: The same Top 100 chains and Top 100 companies are ranked on the basis of U.S. foodservice sales and revenue in their preceding full fiscal year. Chains and companies assigned a Preceding-Year rank beyond No. 100 would have held the position in the Preceding Year among the Second 100 chains and companies. The Second 100 is a companion study to be published in the July 28 issue. Ties are assigned the same rank.

U.S. food and beverage revenue: Sums generated through U.S. consumer foodservice activities by the company or its operating subsidiaries. U.S. dollar amounts are irrespective of foreign-currency conversions by foreign-based companies. Included are sales at company-owned operations as well as food and beverage sales royalties and fees collected from franchisees. Excluded from revenue figures are total sales at franchised restaurants, revenues generated by manufacturing or wholesaling of food or other products, foodservice distribution revenues, and other revenues from nonfoodservice sources. Figures for hotels, contractors, in-store feeders and theme parks exclude nonfoodservice retail sales and contract activities.

U.S. systemwide foodservice sales: Foodservice sales at all domestic restaurants, stores or other outlets in a chain, including company-owned, company-managed, franchised and licensed units. Sales from manufacturing, distribution, facilities rentals and other nonfood sources are excluded.

Why wasn’t my chain or company included?

How do systemwide sales differ from
revenue?

Systemwide sales are a total for every domestic company-owned, franchised and licensed outlet within a chain or multiunit operation. Revenue is a company’s top-line income from food and beverage sales, generally from company-owned and -managed units and from foodservice-related fees and percentage-of-sales royalties collected from franchisees.

How is the estimated sales per unit metric calculated?

Sales-per-unit figures result from mathematical equations of systemwide sales growth and year-end change in number of units, and are done according to NRN’s proprietary formula. For consistency and comparability, NRN estimates partial-year sales contributions from units opened and closed during the respective years. Units with atypical sizes or sales capacities may be included.

What is meant by Top 100’s market-share figures?

Within the context of Top 100, the “market” is the aggregate sales or units of only those chains ranked in the study within a specified segment or category. Market share is an individual chain’s proportional share of that total only during each of the three years compared.

Why do some Preceding-Year and Prior-Year rankings and data differ from corresponding data and rankings in last year’s published study?

My chain appears on other industry sales rankings, yet it’s not included in yours. Why?

Varying studies employ different criteria. We believe NRN market data is the industry’s most meaningful survey of domestic volume, growth and market trends because it compares leading organizations only on the basis of their consumer foodservice results in the United States.

But my chain has more units or higher sales per unit than do some of the chains included in those rankings. Why wasn’t it included?

Only the Top 100 and Second 100 chains, as determined by systemwide sales, are ranked by such other criteria as number of units, sales per unit and rates of growth. In other words, the universe for those rankings is limited to chains that appear in the table titled “Top 100 (or Second 100) chain U.S. systemwide foodservice sales.”

My company’s revenue far exceeds the figure shown for many of the corporations ranked, and yet you omitted my company. Why?

Companies were included in the Top 100 or Second 100 because of their foodservice revenue, not their total revenue. The Top 100 study attempts to exclude proceeds from all other business activities, such as manufacturing, distribution, general retail, nonfood contract services, property rental and amusements.

Ties. Alphabetical order is not used to assign a lower ranking to chains or companies whose results exactly match those of other entities.

Why did NRN stop including hotel brands and theme parks in the chain study?

Much like our decision to eliminate contract chains in the 2012 Top 100 report, we found that these categories were less relevant to the majority of our audience than the emerging restaurant chains that could replace them. The move better focuses our study on businesses centered on foodservice. The estimated foodservice revenue of the parents to some of the hotel and theme park chains we tracked in the past can still be found in the Top 100 and Second 100 Companies census.

Moreover, in the case of hotels, none of the large chains report publicly nor offer guidance on their food and beverage sales.

With regard to theme parks, we found that there simply was too great a difference among concepts in the theme-park groups. At the same time, there also was too great a disparity between theme parks and the other chains in the study, which typically comprise hundreds to thousands of small- to medium-size boxes offering only one style of food, not a handful to dozens of multiuse sites offering everything from cotton-candy carts to room service.