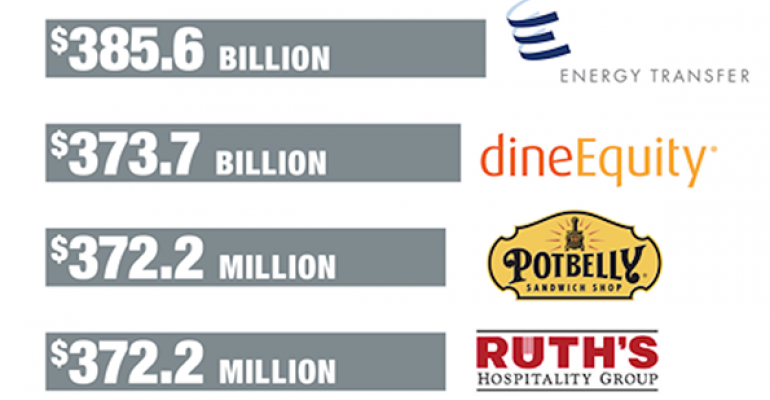 The quickest way to generate additional revenue in the restaurant business is to buy in bulk. 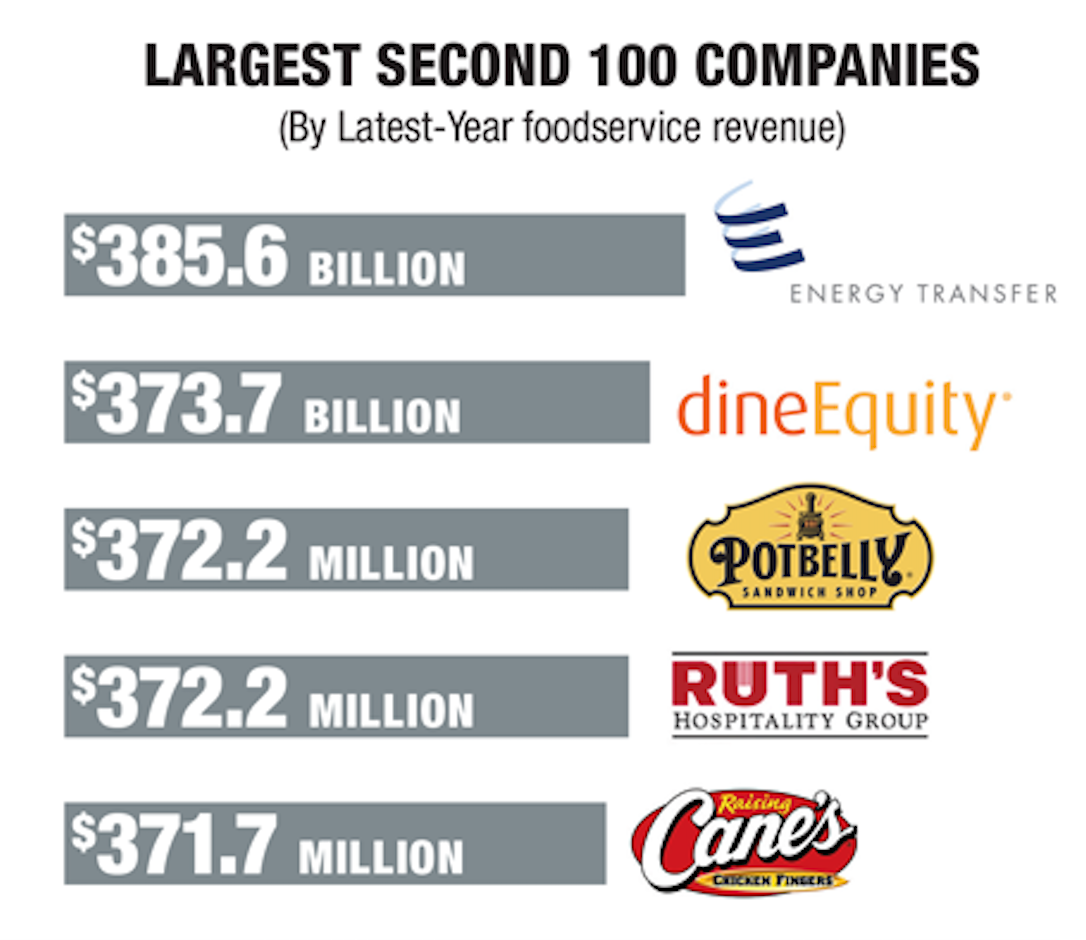 Indeed, seven of the 10 fastest-growing restaurant companies by foodservice revenue have grown by making deals for new units. Burger King franchisee GPS Hospitality has more than tripled over the past two years simply by buying restaurants.

But a group of companies in the Second 100 ranking grew organically, by building new units, establishing new concepts or improving same-store sales.

Many fast-growing concepts, like Zoe’s Kitchen Inc. (up 73.8 percent), Shake Shack Inc. (up 63.2 percent), and Raising Cane’s Restaurants LLC (up 21.5 percent), have been adding locations and luring more customers to their restaurants, helping those companies generate strong revenue growth.

Front Burner Restaurants LP is another standout; the company’s foodservice revenue grew 96.9 percent to $169.3 million in the Latest Year and Preceding Year combined.

“Our growth concepts are in step with consumer trends, and we have been able to attract or develop excellent managers to run the restaurants,” Randy DeWitt, CEO of Dallas-based Front Burner, told NRN.

But deals still played a big role in the revenue ranking.

At the top of the list is Energy Transfer Partners LP, the Dallas-based energy company that in 2014 bought Susser Holdings Corp. Susser operated Stripes convenience stores, which in the Latest Year contributed an estimated $312.4 million in foodservice revenue to Energy Transfer’s coffers, giving the company $385.6 million — a 614.1-percent increase in just two years. 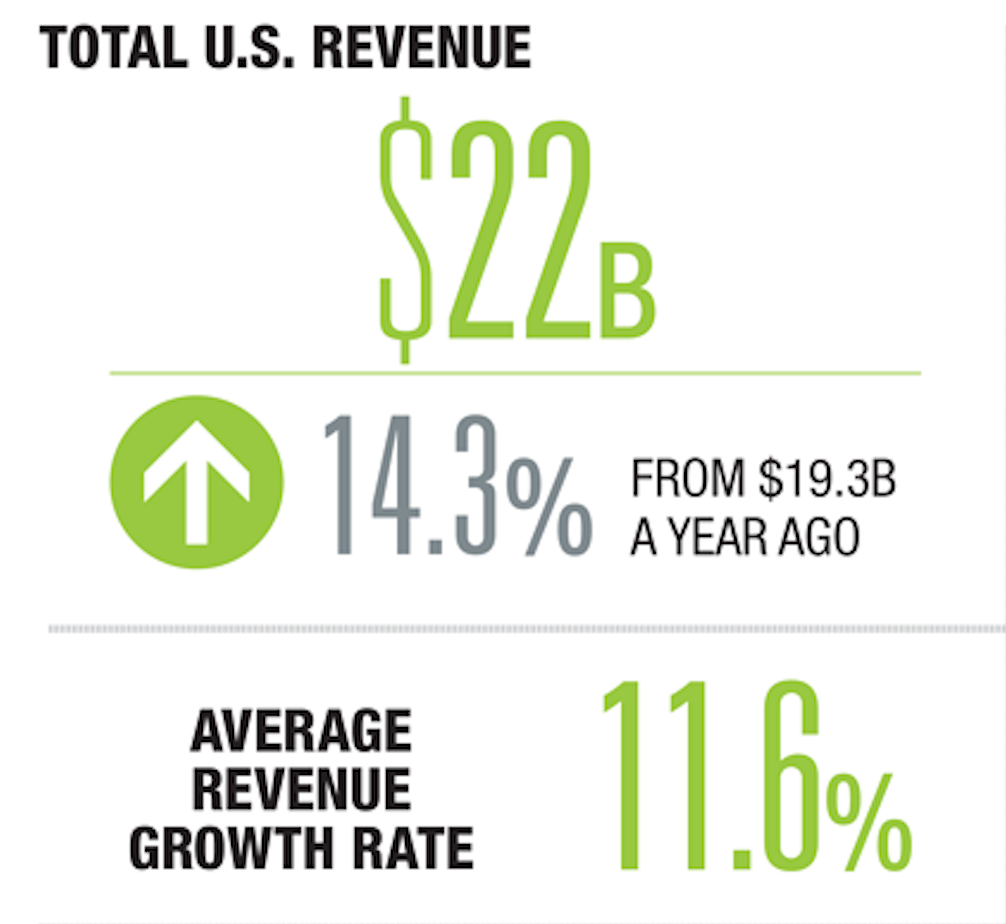 Ruth’s Hospitality Group tied at No. 103 on this Second 100 in revenue ranking, falling from the Top 100 list thanks to its sale of Mitchell’s Fish Market and Cameron’s Steakhouse to Fertitta Entertainment Inc. for $10 million. Ruth’s foodservice revenue fell 11.3 percent to $372.2 million in the Latest Year from $419.5 million in the Preceding Year.

The fastest-growing company by revenue on this list, probably not surprisingly, was a franchisee: GPS Hospitality LLC, which is rapidly becoming one of the largest franchisees in the country.

GPS’s estimated revenue grew by 164.3 percent in the Latest Year to $215.4 million from $81.5 million the year before. GPS bought 84 Burger King locations in the Latest Year and 90 in the Previous Year and the company run by former Arby’s CEO Tom Garrett isn’t done: It just signed a deal to develop Popeyes Louisiana Kitchen.

“We like to see the business grow,” Garrett told Nation’s Restaurant News earlier this year. “It’s so much fun taking something that someone has lost interest in and upgrading the facility, operations and people, and seeing sales go up.”

Several other fast-growing businesses are franchisees, including RPM Pizza, where revenue grew 40.3 percent in the Latest Year to $187.3 million from $133.5 million. Some of that is due to the Gulfport, Miss.-based company’s franchisor, Domino’s, surging same-store growth in recent years. But RPM also acquired 45 locations in February of 2015 from Pizza Properties Inc.

Another growing company is Diversified Restaurant Holdings Inc., where revenue grew 34.4 percent in the Latest Year, due almost entirely to the performance of its Buffalo Wild Wings restaurants. Revenue grew to $172.5 million from $128.4 million. The operator bought 21 Buffalo Wild Wings locations.

There were some other notable deals that affected this year’s ranking.

Private-equity group Acon Investments saw revenue decline 2.2 percent to $371.4 million, one year after its revenue nearly doubled. Acon sold Peter Piper Pizza and its $46.8 million in revenue to CEC Entertainment in 2014. But it offset that deal by acquiring 33 Applebee’s restaurants in Indiana and Ohio from Apple Sauce Inc.

Another notable deal came from Berkshire Partners LLC, the private-equity group that acquired Portillo’s and Barnelli’s Pasta Bowl brands in August 2014. The brands generated $338.6 million in revenue in the Latest Year.