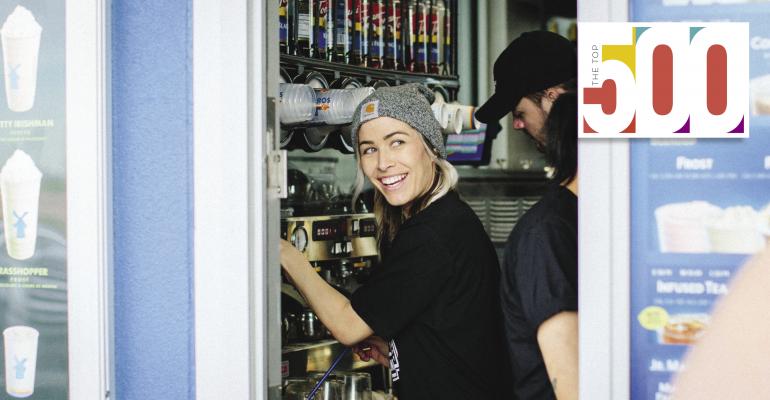 Dutch Bros. gets a jolt from drive-thru

Early in the pandemic, many wondered whether the breakfast daypart and coffee segment would be left for dead. After all, millions of Americans started working from home, dropping their commute and their regular trip through the drive thru for coffee. And Starbucks’ sales plummeted even further than its QSR peers.

Dutch Bros. didn’t get that memo, though. The Grants Pass, Ore.–based drive-thru coffee chain saw only a minor blip in sales last spring before roaring back and closing the year with 7.7% sales growth, according to Top 500 data.

President Travis Boersma, who cofounded the chain with his late brother Dane in 1992, said the company’s laid-back, “fun-loving” culture was mostly to thank.

“We're in the relationship business. The product is love,” he said. “We're all about trying to figure out how to persevere through trying, challenging times, and hope is the name of the game.”

And Dutch Bros. sure needed the hope, as the pandemic wasn’t the only crisis it faced in 2020. The company also had to deal with forest fires, which forced 90 locations to close temporarily due to air quality. There was also the political unrest, which was especially potent during the Black Lives Matter protests in Portland, Ore., last summer.

Dutch Bros.’ reliance on drive-thru business helped guide the company through all of it. The brand wasn’t forced to shut down indoor dining like the vast majority of restaurants. It only needed to adapt its drive-thrus to feature contactless payment and service and enhance its safety protocols to protect its “Broistas.”

Company CEO Joth Ricci said Dutch Bros. did see a dramatic drop in business between 6 and 9 a.m. But that business was supplanted by a rise in sales between 9 and 11:30 a.m. Ricci said the fact that Dutch Bros. doesn’t serve much food or drip coffee (just espresso-based beverages) meant that the brand became even more of a destination for snacks and respite later in the day.

“We serve the second drink in a daypart, so if your first drink was black coffee at home to get your day started, we're going to be there for that second drink,” Ricci said, noting that average ticket sizes grew in 2020 because many people would do a bulk order for their families.

Because drive-thru was more or less impervious to the industry changes wrought by COVID, it enjoyed something of a renaissance in 2020, with many brands developing plans for drive-thru expansion. Ricci and Boersma say the increased competition doesn’t worry them; in fact, it could help Dutch Bros.

“If the drive-thru experience improves at McDonald's and it improves at Chipotle as they start to look at drive-thru opportunities, and if it continues to improve at Starbucks, I think that just improves the customer experience and everything that you do,” Ricci said. “But I think at the end of the day you've got to be focused on yourself and relentlessly do what you do and who you are.”

He added that he’s particularly excited about technology advancements that have been expedited by the pandemic and companies’ push into drive-thru development.

Dutch Bros. had its own technology innovation in the past year, as it released a loyalty app.

“We think our app’s given us great momentum,” Ricci said. “We've got over 2,000,000 users now on our platform in the first four months that we've opened it, and we're excited for the momentum that we've got building.”

Dutch Bros. is continuing to ride that momentum in 2021. It plans to open nearly 100 locations this year, including a major push into Texas and Oklahoma. And in June the brand announced that it had confidentially filed for an initial public offering; Bloomberg reported earlier this year that Dutch Bros. was seeking a valuation of around $3 billion.