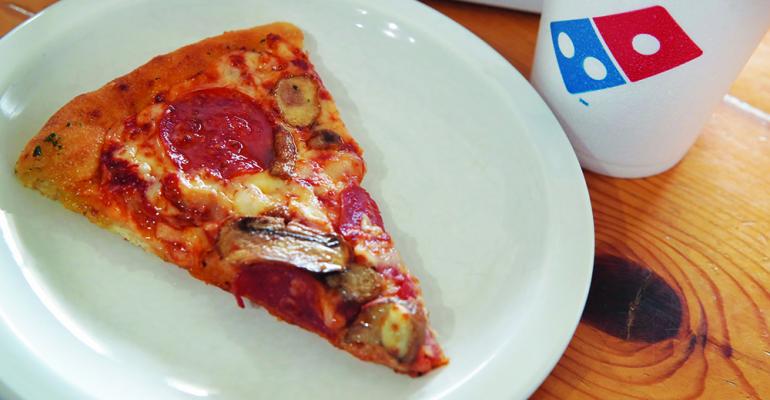 Domino’s had a great year. Domestic systemwide sales were up by 11.1 percent in the Latest Year, on top of a 10.9-percent jump in the Preceding Year, making it the largest pizza chain in the country in terms of sales as it surged past Pizza Hut. The Ann Arbor, Mich.-based chain opened a net 216 units in the United States — the most new restaurants in 20 years — all while improving unit economics.

About 93 percent of Domino’s domestic locations are franchised.

McIntyre said the groundwork for Domino’s turnaround started in 2008, when same-store sales were negative and “we had to do something other than blame the economy.” 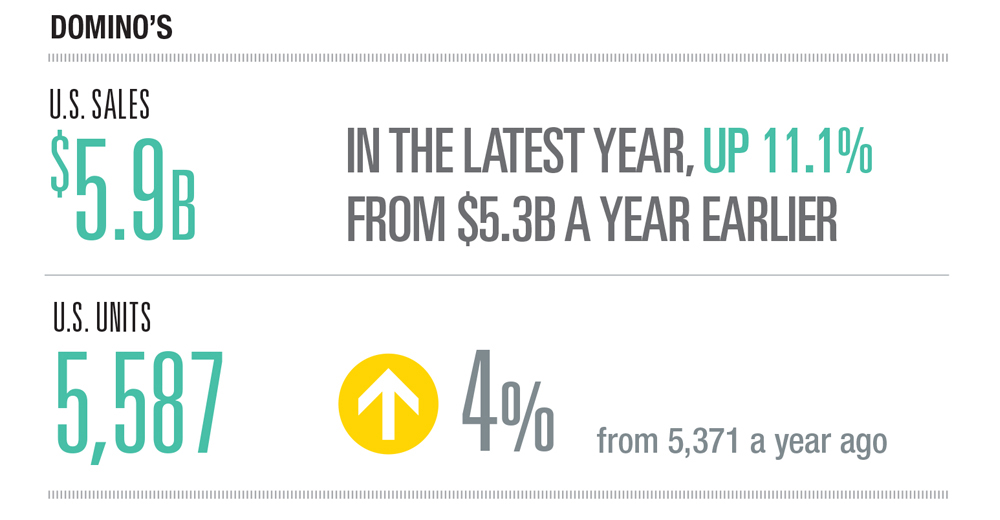 That’s especially true since same-store sales had been falling since 2006.

In a 2010 marketing coup, former CEO J. Patrick Doyle famously stepped in front of the camera, acknowledged that their pizza tasted bad and launched a reformulated product.

Since then, McIntyre said around 85 percent of the menu is new or improved, and sales have been rising ever since. But that’s due to more than better food. In 2010 Domino’s also launched the value pricing of two medium two-topping pizzas for $5.99 each, a message they’ve stuck to and that resonates with guests, McIntyre said.

“What we learned — it took us 50 years — is people get excited [by LTOs], we train them, spend millions of dollars on marketing, and they might generate a trial, but by the time the customers would come back to order from us, the item would already be gone. ... It was gimmicky and price-point changing, and we believe we can generate news to consumers in different ways.”

In that vein, Domino’s recently started filling in potholes. Promoted as a way to make carryout easier, the chain is taking requests from communities and has already provided grants to repair roads in three communities.

Arguably even more important than better food are Domino’s technological advances that have made ordering pizza as easy as sending a tweet.

The “easy order” function on the chain’s digital app lets customers order their favorite pizza, already saved on the app, in ten seconds. Or they can tweet a pizza emoji to Domino’s Twitter account.

McIntyre said those advances have been a key to the chain’s success, “by utilizing technology and being able to order on the device that you prefer, and doing so simply.”

Domino’s also has paid close attention to its carryout customers, sales to whom grew faster than delivery orders in 2017.

“We renovated all of our stores and made them more attractive to carryout customers,” McIntyre said.

The process took more than four years and is still in its last stages, but McIntyre said it helped improve profitability.

And innovation continues. In 2017 Domino’s began working with Ford Motor Company on self-driving vehicles. McIntyre estimates that the technology is three to 10 years away, “but we know that it’s coming,” and Domino’s is working to figure out how customers are going to react to it.

“We spent 58 years training you that the pizza will come to your door,” McIntyre said. Now they have to see if customers are willing to go out to a driverless car.

In the meantime, this year Domino’s has launched Hotspots, latitude and longitude coordinates determined by franchisees where people are likely to congregate and want pizza — places like beaches, parks or tailgate parties.

“It’s really about us being where our customers are, that anywhere, anytime mentality about meeting customers’ needs,” McIntyre said.