The approach is working for the chain.

Black Bear plans to add 21 to 22 of it’s mountain-lodge-themed restaurants a year, Dean said, and nearly all will be conversions. The chain is targeting unit growth of about 20 percent this year, to end 2018 with 126 units. 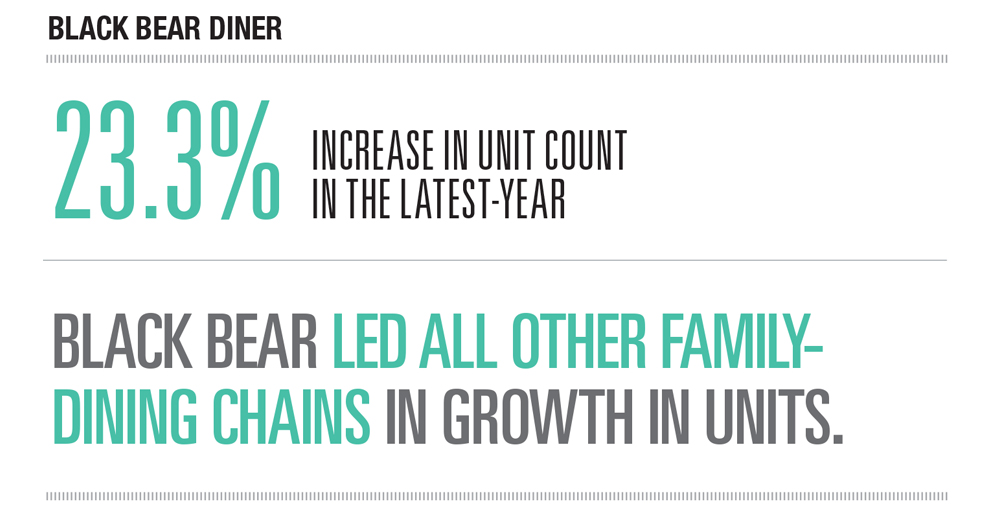 “We’ve converted every brand you can think of into a Black Bear Diner,” he said. “We are not cookie-cutter. Every Black Bear is different.”

“With no lack of distressed restaurant real estate out there with 5,000 to 6,000 square feet per box, it’s really a great opportunity for Black Bear Diner,” Adams said at the same conference.

The company generally spends $1 million for each conversion, with $800,000 for construction and $200,000 in pre-opening expenses, she said.

Black Bear, which owns and operates about a third of its more than 100 units, is targeting 50-50 corporate-franchised unit growth in the near term, Dean said.

Much of the growth stems from the February 2016 private equity deal with PWP Growth Equity, a private-equity fund managed by Perella Weinberg Partners. At the time, the brand had 75 units.

Dean said that investment gave the company the chance to put systems in place to ramp up development while continuing to offer its “classic comfort food” in large portions.

Dinner is a solid daypart for Black Bear Diner, unlike at many family-dining brands. Black Bear sales by daypart are 32 percent for breakfast, 37 percent at lunch and 31 percent for dinner.

Estimated sales per unit are $2.6 million, which, within the Top 200 Family-Dining segment, trails only Golden Corral and Cracker Barrel Old Country Store.

Dean said the company, which he founded in 1995 in Mount Shasta, Calif., with his business partner Bob Manley, expects to the brand to have systemwide sales of $275 million by the end of 2018.

Customer loyalty is also a factor. The company, for example, has 30,000 people who have signed up for Black Bear’s “Passport” program, where they get stickers in a booklet for visiting units. “Their vision is to visit every Black Bear,” he said.