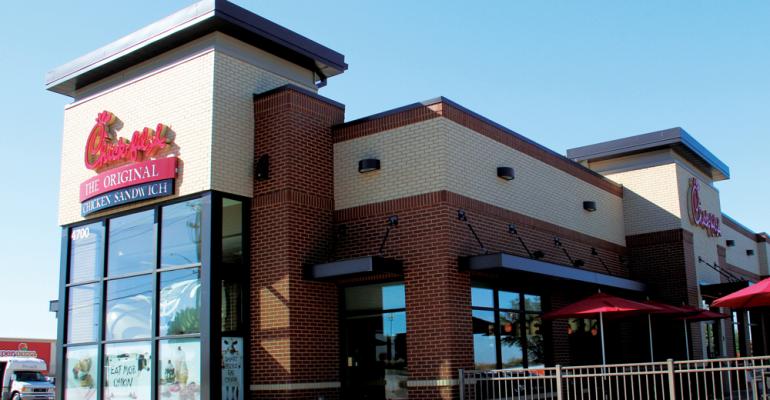 Restaurant companies saw their aggregate domestic sales growth slow in 2017, according the latest edition of Nation’s Restaurant News Top 200, and brand executives made the tough decisions to trim back on expansion plans in some cases and make the changes needed to fine-tune unit economics.

“Growth in aggregate U.S. systemwide sales among Top 200 chains slowed a little bit from 3.6 percent to 3.0 percent in the Latest Year,” said Alan Liddle, data and event content director for Nation’s Restaurant News and manager of the Top 200 ranking.

“That’s a slight slowing,” Liddle added, “but 3 percent growth in the aggregate overall sales in the Top 200 chains really isn’t a horrible place to be.” The NRN Top 200 ranking lists chains based on domestic systemwide sales in their most recent fiscal year. Systemwide sales include sales generated at both franchisee- and company-owned outlets.

The Top 200 largest chains generated $291.6 billion in sales in the Latest Year, an increase of 3 percent from the $283.1 billion in the Preceding Year. McDonald’s, which has been rolling out a large pipeline of new products over the past year including fresh-not-frozen beef for some sandwiches, led the net change in sales growth.

“The leader this year, interestingly enough, was McDonald’s with a $1.25 billion add to their U.S. system sales.”

McDonald’s was followed by Chick-fil-A with a $1.08 billion addition in the Latest Year and Starbucks with a $1.06 billion increase. They were followed by Panera Bread, which added an estimated $604.5 million, and Domino’s Pizza, which added $589.9 million.

Some sales in freefall

The disparity between top performers in the Latest Year Top 200 and the bottom ranks reflected what industry observers were seeing.

“The Latest-Year slowdown in unit growth made short work of a rebound that seemed underway when the Preceding-Year’s increase of 2.2 percent bettered the Prior Year’s 1.8 percent climb in total units,” Liddle said. “Unpredictable swings in unit growth probably shouldn’t be so surprising given talk of saturation and the impact even a single large chain’s bankruptcy or restructuring can have on location numbers.”

The Latest Year produced a number of warnings by large chains that they would be slowing their unit growth despite public market pressure to continue expansion.

Red Robin Gourmet Burgers Inc. warned in November that it would join BJ’s Restaurants Inc., Zoe’s Kitchen Inc. and Potbelly Corp. among chains that would be curbing unit expansion on the horizon.

“Category volatility underscores our cautious outlook for the remainder of 2017 and our intention to pause unit growth as of year-end 2018,” said Denny Marie Post, CEO of the Greenwood Village, Colo.-based casual-dining brand, said in releasing quarterly earnings last November.

“This decision will give us needed time to test new approaches to inform future growth,” Post said. Red Robin said it would slow its growth after forecast openings in 2018.

The NPD Group said in a statement that the unit count in the U.S. reflects what the research firm is seeing in the industry overall.

“To expand or not expand units is a calculated decision on the part of restaurant operators.”

In the Top 200’s Top 20, one of biggest shifts in the latest year was Chick-fil-A passing Dunkin’ Donuts in total sales to take the No. 7 spot.

The Atlanta-based limited-service chicken brand made that sales leap despite a closed-on-Sunday six-day week.

“They are leveraging everything they do well, and that’s created a really big jump in sales,” Liddle said.

Chick-fil-A’s estimated sales per unit of $4.2 million in the Latest Year was up from $3.9 million per store in the Preceding Year and $3.5 million per location in the Prior Year.

“Chick-fil-A’s store-level performance is improving, and they are adding units,” Liddle said. “It’s just a lot of positive forward momentum.”

Liddle noted that the Chick-fil-A’s ESPU is one and a half times that of a standard U.S. McDonald’s unit and the brand seemed to be firing “on all burners.” The chains with the greatest individual growth in ESPU represented the Chicken, Bakery-Cafe and Beverage-Snack segments, with Raising Cane’s Chicken Fingers leading the Top 200 with a 9.9-percent increase in the Latest Year, followed by Panera Bread (up 8.4 percent) and Tropical Smoothie Cafe ( up 7.6 percent).

The Pizza segment, which makes up 7.9 percent of the Top 200 sales universe, saw Domino’s Pizza overtake Pizza Hut in domestic market share for the category. Domino’s also took Pizza Hut’s spot at No. 9 in the top of this year’s census.

Like Domino’s, Panera became an early leader in digital innovation with its Panera 2.0 initiative as the rest of the Bakery-Cafe segment fell behind. Panera also expanded its in-house delivery network as other brands wrestled with the growing number of third-party providers.