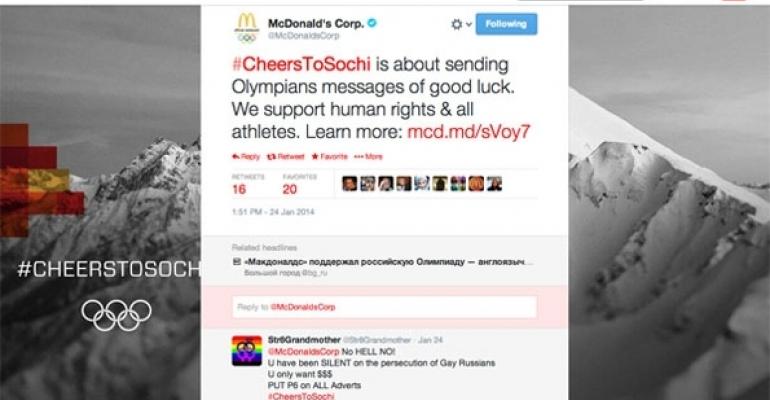 The opening ceremonies of the Winter Olympics are scheduled for 11 a.m. EST Friday, but pressure groups already have begun a social media campaign against the games’ official restaurant sponsor, McDonald’s Corp.

Queer Nation NY, an advocacy group protesting the games’ host nation of Russia for a recent anti-gay law — which classifies gay people’s expressions of their sexuality as “propaganda” and is punishable by jail — twice has seized upon McDonald’s social-media promotions in support of the 2014 Winter Olympics in Sochi.

The launch Thursday of a “Cheers to Sochi” parody website that spoofs McDonald’s own promotional site of the same name trades out the quick-service chain’s photos of Olympic athletes with images of gay Russians who have been beaten and attacked in that country under the auspices of the anti-propaganda law enacted last June.

The Oak Brook, Ill.-based company, which has been involved with the Olympic Games since 1968 and has been the official restaurant sponsor for the past 10 Games, also had launched a separate major social media campaign on Jan. 21.  McDonald’s asked its Twitter followers to tweet encouraging messages to American athletes with the hashtag #CheersToSochi, but gay rights activists quickly monopolized the hashtag.

Becca Hary, McDonald’s director of global media relations, wrote in an email to Nation’s Restaurant News that the brand’s intention always was to celebrate Olympic athletes and that McDonald’s would “respect everyone’s rights to express their opinions.”

“Social media is all about conversation,” she wrote. “Understandably, the LGBT community is focusing its conversation on the Russian legislation. … ‘Cheers to Sochi’ is a cool way for fans to cheer on athletes and teams who are competing in Sochi. McDonald’s is proud to be a top sponsor of the Olympics; our sponsorship dollars literally help the men and women who are working to achieve their Olympic dreams.”

One of the hundreds of tweets directed at McDonald’s came from Queer Nation NY on Jan. 23: “Dear Hamburglar at least you earned your prison stripes for an actual crime. Unlike #LGBT citizens of Russia. #CheersToSochi @McDonalds.”

McDonald’s Corp. responded on its Twitter page to the controversy on Jan. 24: “#CheersToSochi is about sending Olympians messages of good luck. We support human rights and all athletes.” The tweet included a link to the brand’s Cheers to Sochi website, which took the place of the Twitter campaign, as no McDonald’s tweets contained the promotional hashtag after that.

However, many of the same Twitter users attaching their criticisms to the promotional hashtag soon began pointing other users toward the parody site.

The parody website’s creator, Scott Wooledge of Queer Nation NY, said in a statement that social media actions taken against McDonald’s — as well as other major sponsors like Visa, Coca-Cola and Procter & Gamble — reflect the gay community’s impatience with corporate sponsors trying to promote the Olympics while not addressing what many people view as human rights violations in Russia.

“#CheersToSochi speaks to frustrated people around the world who are disgusted with the sponsors’ silence,” Wooledge said. “Their silence, and tacit consent with Russia’s war on gays, has damaged their brand images worldwide.”

McDonald’s spokeswoman Hary wrote in her email, “We remain engaged with the International Olympic Committee and have made clear our concern regarding this human-rights issue and the paramount need to ensure nondiscrimination and safety for everyone at the games.”

McDonald’s operates or franchises nearly 35,000 restaurants in more than 100 countries, including more than 14,000 locations in the United States.